Many of the most important government programs — including Social Security and Medicare — transfer resources to older people and tax their labor supply relative to that of younger people. Economic theory predicts that such programs reduce late‐​life labor supply. Understanding the size and nature of such effects is important, as demographic trends have both increased the potential labor supply of the elderly and increased the need for reforms to government old‐​age support programs. This raises three important questions. What are the effects of government old‐​age support on late‐​life labor supply? What is the relative importance of the two key features of these programs: transfers to older people, and taxation of their labor? And to the extent that taxation is important, how large are the associated welfare costs to recipients?

We address these questions by investigating Old Age Assistance (OAA), a means-tested program introduced in the 1930s alongside Social Security. OAA was large both in absolute terms — 22 percent of people 65 and over received OAA in 1940 — and relative to Social Security, which made no regular payments until 1940 and remained smaller than OAA until the 1950s. Like presentday social insurance programs, OAA both increased nonlabor income and, by reducing benefits for recipients with positive earnings, implicitly taxed work by older people. Yet unlike Social Security and other programs that are national and near-universal in coverage, OAA was state-administered and exhibited considerable variation across states in eligibility and benefit levels. These aspects of OAA provide unusual empirical leverage for learning about the effects of these programs.

The setting we study also provides an opportunity to shed light on the extent to which OAA and Social Security contributed to the large decline in labor force participation among older men over the 20th century. Figure 1 illustrates these trends during the early expansions of these programs, from 1920 through 1970. The striking time-series correlation between the expansion of Social Security after 1950 and declining labor force participation is often noted in discussions of Social Security and retirement, but significant uncertainty remains about the causal relationship between the two trends. 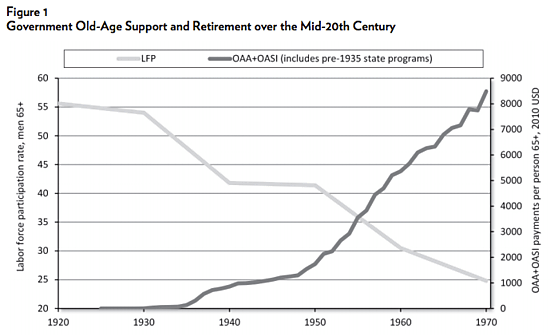 Our research takes advantage of recently released data from the 1940 U.S. Census. Two advantages of this dataset are its large sample size (over 6 million men aged 55 to 74) and its precise geographic information. Our main empirical analysis makes use of two sources of variation. The first is the age eligibility requirement that existed in all states, almost always limiting eligibility for OAA to individuals 65 or older. Importantly, other modern-day programs that use age 65 as a cutoff, including Social Security, were either small or non-existent at the time. The second source of variation is cross-state differences in payment levels and eligibility rules of OAA programs. The empirical analysis tests whether there is a differentially large reduction in labor force participation after age 65 in states with larger OAA programs relative to states with smaller programs.

As another placebo test, we document that in 1930, prior to the passage of OAA, states that would have higher OAA payments in 1940 did not have differentially larger reductions in labor force participation after age 65. Although we find large effects of OAA on labor force participation, further results suggest that the welfare cost to recipients of OAA’s high implicit tax rate on work was small. Many people took up OAA without exiting the labor force to do so: although we estimate that 6 percent of men aged 65 to 74 were out of the labor force in 1940 because of OAA, these individuals represented only about one-third of all OAA recipients in this group.

Moreover, an important share of the men who did exit the labor force because of OAA had poor labor market prospects: between one-fifth and one-quarter of the reduction in labor force participation was due to exit from unemployment, and about one-fifth was due to exit from employment in work relief programs that were targeted at individuals who would otherwise be likely to be unemployed. In addition, the effects of OAA were concentrated among men with low levels of education and, in particular, men with low earnings before receiving OAA.

Finally, we ask what our estimates suggest about the role of government old-age support — and of Social Security in particular — in the growth of retirement over the mid-20th century. OAA provides useful insight into this question because the earnings test in the early Social Security program resembled the earnings tests of OAA. Our results suggest that Social Security had the potential to drive a significant share of the mid-century decline in late life labor supply. A simple extrapolation suggests that the expansion of Social Security from 1940–1960 would be expected to have reduced labor force participation among men aged 65–74 by 9.5 percentage points, 70 percent of the actual decline. We also use our estimates to derive a lower bound of the effects of Social Security on labor supply, by simulating a version of Social Security that is conservative in that — for example — it does not include the eligibility and benefit expansions that actually occurred after 1939. The results suggest that even this relatively modest Social Security program would be expected to have large effects on labor supply, reducing labor force participation among men aged 65 to 74 by about 8.0 percentage points, 59 percent of the actual decline.