In 1851, in the aftermath of an economic crisis that forced Indiana into default, the state rewrote its constitution to require that laws enacted by the legislature “be general and of uniform operation throughout the state.” This directive may not seem remarkable from the standpoint of the 21st century; we take it for granted that that is what legislatures do. From the perspective of the mid‐​19th century, however, the provision was groundbreaking. It was the first such mandate ever enacted, and Indiana’s innovation spread to almost all the other U.S. states over the next few decades. Although the federal constitution was never similarly amended, the states’ revisions changed the norms for how democratic governments should operate and ultimately reshaped federal practice as well.

Before Indiana’s innovation, the main business of legislatures was to enact special or private bills on behalf of specific individuals, organizations, and localities. The year before its new constitution was ratified, for example, Indiana’s general assembly passed 550 acts. About half benefited particular local governments, granting them permission to spend public funds; borrow money; levy taxes; set salaries, fees, duties, and meeting times for administrators and judges; and take a variety of other actions. Almost all the rest (nearly 40 percent) aided particular individuals or organizations. Some involved personal matters such as divorces, name changes, and the administration of decedents’ estates, but the vast majority conveyed grants of economically valuable privileges (such as corporate charters) to people specifically named in the bills.

Because some people, groups, and localities were better positioned than others to obtain favors from the legislature, this system of special laws was fundamentally inegalitarian. Indeed, it was precisely because it was inegalitarian that it persisted. The competitive democratic politics of the early 19th century drove governing elites to consolidate their political support by doling out favors to members of their factions and denying them to people who belonged to other groups. Those in power benefited from the ability to dispense charters for banks and other valuable economic organizations. Those out of power complained bitterly about this “corruption,” but they behaved in exactly the same way when they were in office, favoring supporters and freezing out opponents. To do otherwise would be to risk losing control of the government and, with that, access to banks and similar advantages.

Therefore, despite the discontent the system generated, it was remarkably persistent. From time to time there were episodes of significant change. For example, in two cases in Massachusetts and New York the fallout from the political awarding of bank charters led elites to take the unprecedented step of allowing anyone who met a basic set of criteria to form a bank. The resulting increase in the availability of credit delivered significant benefits to the economies of these states, but elites elsewhere resisted giving up the political benefits that the awarding of bank charters afforded. More widespread change came only with the economic crisis of the early 1840s, when Indiana, seven other states, and one territory defaulted on their bonded debt and several other states teetered on the brink of default. The crisis set in motion a massive political earthquake that overcame elite resistance to change, propelling most of the affected states to revise their constitutions and, ultimately, sweep the system of private and local legislation away.

We document this transformation, focusing on Indiana because it was the first state to make the full set of changes. Indiana got into financial trouble because it had borrowed heavily during the late 1830s to fund an extensive system of internal improvements. In order to secure support for a canal across the middle of the state, promoters had added funding for numerous smaller projects that benefited specific individuals, organizations, and communities until the bill grew to “mammoth” proportions. Delegates to the state’s constitutional convention understood that if they wanted to prevent such crises from reoccurring, they had to reform the way the legislature worked, and they voted by a large margin to ban special and local legislation for a long list of categories, including corporate charters. Hoping to force legislators to shift attention from their own interests and jurisdictions to those of the polity as a whole, they took the additional step of insisting that all laws be general and uniform throughout the state.

Though almost all states eventually followed suit, most initially responded to the crisis with more‐​modest changes. Some added provisions to their constitutions that banned special charters of incorporation but not private bills more generally. Others simply enacted general incorporation laws for business enterprises. Historians have written extensively about these statutes but have not appreciated the extent to which they were just one step in a series of more far‐​reaching reforms. General incorporation laws allowed anyone to form a company and secure basic corporate advantages, but legislatures could and did continue to grant special charters on more‐​favorable terms to political supporters. It was only when states wrote provisions into their constitutions that banned such charters that general incorporation laws significantly opened access. And it was only when the prohibition on special charters was accompanied by a mandate that all laws be general that legislators’ ability to control the exploitation of valuable economic opportunities for political ends was significantly curtailed.

These fundamental reforms resulted in a transformation of American political economy. So long as corporations were products of specific political deals, governments had little ability to regulate their activities, regardless of the restrictions that might have been embedded in their charters. Only when they were products of general laws and not the privileged creatures of legislative favoritism could modern regulatory institutions emerge. And they did. The constitutional revisions drafted in the wake of the defaults gave form to the resentments of white male voters disadvantaged by the system of legislative favoritism, and as a result, the general incorporation statutes that followed included numerous restrictions that aimed to level the playing field. These regulation‐​laden laws succeeded in extending corporate advantages to an enormous number of small‐ and medium‐​sized enterprises. However, the laws did not prevent railroads and other large‐​scale businesses from amassing considerable market power, so most states responded to this new threat by beefing up their regulatory capabilities, creating formal commissions to limit the rates charged by railroads and other public‐​service corporations and enacting antitrust laws with significant bite.

The state constitutional revisions also transformed the ways in which the wealthy and powerful lobbied the government—or, to put the matter more bluntly, their methods of corruption. Before the reforms, businesspeople had mainly agitated for private bills that specifically benefited their own enterprises; afterward, they discovered they had a common interest in influencing the content of general laws, and they began to organize—and spend money—for their collective advantage. At the same time, however, the shift to general laws facilitated the formation of new kinds of voluntary associations that arose to counter the economic power of big business, giving rise to the myriad of organizations that University of Chicago professor Elisabeth S. Clemens has called the people’s lobby. Corruption by no means went away and in some ways may even have intensified, as the organs of the people’s lobby repeatedly claimed. But to focus on the extent of corruption, as the literature on the Gilded Age mainly does, is to obscure the fundamental change in political economy that occurred during this period.

NOTE:
This research brief is based on Naomi R. Lamoreaux and John Joseph Wallis, “Economic Crisis, General Laws, and the Mid‐​Nineteenth‐​Century Transformation of American Political Economy,” Journal of the Early Republic, forthcoming, http://​doi​.org/​1​0​.​3​3​8​6​/​w​27400.

How Can Us Politics Survive No Shared Understanding of the Economy? 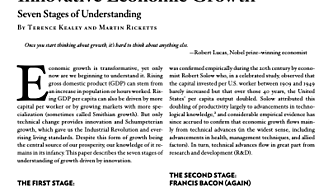