To Whom It May Concern,
I appreciate the opportunity to comment on the Notice of Proposed Rulemaking (Proposed Rule) describing changes to Community Reinvestment Act (CRA) regulations proposed by the Office of the Comptroller of the Currency and the Federal Deposit Insurance Corporation (the Agencies).

The Cato Institute is a public policy research organization dedicated to the principles of individual liberty, limited government, free markets, and peace. Cato’s Center for Monetary and Financial Alternatives, at which I am a policy analyst, is dedicated to revealing the shortcomings of today’s centralized, bureaucratic, and discretionary monetary and financial regulatory systems and to identifying, studying, and promoting alternatives more conducive to a stable, flourishing, and free society.

I thank Comptroller Otting and Chairman McWilliams for their leadership in the discussion of how CRA regulations can best promote financial inclusion and the well‐​being and prosperity of low‐ and moderate‐​income (LMI) communities.

Summary
The Proposed Rule would make a welcome update to CRA regulations, which have not been significantly revised since 1995. The Agencies’ overarching goal—to provide much‐​needed clarity to banks about their future CRA evaluations—is laudable. However, three changes included in the Proposed Rule merit further consideration.

First, although the proposal’s creation of deposit‐​based assessment areas, to complement existing facility‐​based ones, very properly acknowledges the growth of branchless banking and allows bank activities in “branch deserts” to be CRA‐​eligible, the threshold it applies in counting branchless deposits is excessively high. The Agencies should consider lowering it from 50 percent to 20 percent of retail domestic deposits, so that more banks can avail themselves of deposit based assessment areas. To avoid having a lower threshold pose a heavy compliance burden for some institutions, the Agencies can make reporting of deposit‐​based areas voluntary for banks with branchless deposits between 20 and 50 percent of retail domestic deposits.

Second, although the Agencies’ attempt to replace unclear qualitative evaluation measures with quantitative ratios responds to a longstanding complaint by banks, the proposed thresholds for converting these ratios into CRA ratings appear both arbitrary and capable of harming bank safety and soundness. The Agencies should explain how they arrived at the thresholds proposed and offer proof that banks would be able to achieve adequate CRA ratings while still remaining safe and sound.

Third, by designating as “small” all banks with fewer than $500 million in assets, the proposed Rule would exempt many of the smallest banks and thrifts from burdensome CRA reporting and record‐​keeping requirements. The Agencies should consider going further, however, by raising the “small bank” threshold to $1.5 billion. By also exempting banks presently designated as “intermediate small,” this higher limit would still exempt a small share only (7.7 percent) of system assets.

The Agencies have also proposed to remove home mortgage loans to higher‐​income borrowers living in LMI areas from CRA‐​eligible activities. This change is long overdue. Between 2012 and 2017, around 65 percent of single‐​family mortgages eligible for CRA points in the District of Columbia went to higher‐​income borrowers. In the five largest Metropolitan Statistical Areas (MSAs), that share ranged from 18 percent to 56 percent. Higher‐​income borrowers were never the intended beneficiaries of the CRA, and including them in CRA evaluations does not directly benefit LMI households. 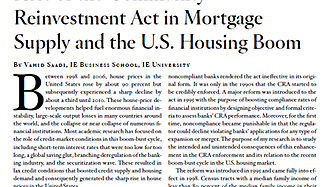 Role of the Community Reinvestment Act in Mortgage Supply and the U.S. Housing Boom

Latin America Sinks under the Weight of its Third‐​Rate Currencies