The results are in for Cato’s 2019 Welfare, Work, and Wealth National Survey, a project undertaken by Emily Ekins, the institutes director of polling. In this survey, conducted in partnership with pollster YouGov, 1,700 American adults were asked for their perspectives on a range of economic and public policy issues. 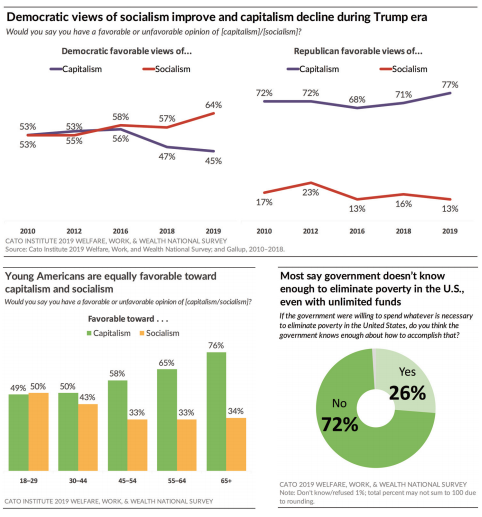 Attitudes toward wealth redistribution also break down along partisan lines, with Democrats in favor (58 percent), support among independents at 36 percent, and support among Republications at 15 percent.

Cato's public opinion research provides a crucial and revealing guide to the nuances of public opinion, informing the institutes scholars and others about the state of public opinion. Cato's polls often reveal how the phrasing of questions can elicit different answers. Often, for instance, Cato surveys reveal that proposed government programs are much more popular if respondents are not told about costs.

THE 2019 WELFARE, WORK, AND WEALTH NATIONAL SURVEY CAN BE FOUND AT WWW.CATO.ORG.