The emergence of the service economy has given birth to the public policy worry that the United States is being reduced to a nation of orderlies, fast‐​food workers, and bus boys. Much of the analysis that has appeared in the press, policy papers, and books has simply sought to describe structural changes in U.S. production and employment.[1]

On the basis of the data depicted in Figure 1, some analysts have concluded that employment in the U.S. service‐​producing sector has for some time risen at a healthy pace, while employment in the goods‐​producing sector, especially in manufacturing, has languished or only crept upward.[2] In the summer of 1985 such disparate employment growth trends prompted a major U.S. news magazine to fill its cover with the banner “Welcome to the Service Sector.”[3]

However, much of the policy analysis has been developed with political agendas in mind and has been artfully juxtaposed with expressions of the heartfelt concern that market capitalism is operating like an unmanned bulldozer at full throttle. Wholesale economic destruction has been said to be evidenced by many conditions, including the accelerating pace of technological and structural change; the “deindustrialization of America”; the mounting financial and social problems of displaced and dislocated workers (particularly older workers) who have few transferable skills; the growing inability of American industry to compete in world markets; and the emergence, due to income‐​distribution patterns, of a “two‐​tiered” (or “bimodal” or “polarized”) society.[4]

The dramatic expansion of the service sector reflected in Figure 1 has been viewed as both a cause and a symptom of a fundamental failure of the U.S. market economy. That failure can be reversed, it has been argued, only by maintaining and creating a wide variety of government‐​backed retraining and income‐​support programs, imposing restrictions on firms’ ability to adjust to changing economic circumstances, and establishing additional or higher barriers to U.S. imports.[5] The wandering bulldozer, in other words, should be given a government driver who will take orders from a number of established and newly created federal and state agencies.

The expansion of the service sector has been perceived as a cause of economic malaise because wages in that sector have been thought to be, on average, lower than wages in the goods sector. It has also been argued that without an industrial base, the United States will surely lose its status as the world’s premier industrial power, only to be replaced by third‐​rate, Third World countries.

The expansion of the service sector has been perceived as a symptom of economic malaise because it has coincided with surpluses of labor in the traditionally high‐​paying heavy industries and a long‐​term increase in the nation’s unemployment rate. In addition, the expansion of the service sector has been thought to mirror a decline in the international competitiveness of American firms due to their inability to adjust their organizational structures and production levels in response to the accelerating changes in world market conditions. U.S. goods‐​producing firms’ inability to compete in the world economy is supposedly indicated by the country’s growing deficit in merchandise trade and the decline in its industrial production.

In fact, the U.S. economy is evolving naturally in response to a host of factors, not the least of which are changes in consumer preferences, opportunity costs, and production technologies. The nation’s economy has always adjusted, and it can be expected to continue to adjust. But no one should expect the process to be painless.

This paper seeks to explain why concern over the emergence of the service economy in the United States is, for the most part, unwarranted and misplaced. Far too much has been read into data on trends in service‐ and goods‐​producing employment such as those shown in Figure 1. Many of the assumptions about the economic value (or lack thereof) of services are wrong. The growth in the service sector has been misunderstood, in part because of the arbitrary division of the nation’s outputs into “goods” and “services”; a largely unexplored reason for it is the fragmentation of firms into smaller and more independent production units.

A major hypothesis of this article is that the growth in the service sector, even in typically low‐​wage industries, has contributed to the growth in American workers’ income, even income created in the goods‐​producing industries. From that perspective, it is clear that the presumed polarization of America is a political issue that has been the object of a misguided and vain search for empirical and conceptual justification.

The Folly of Protectionist Tariffs 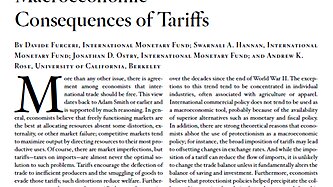