This analysis is based on responses from the nationwide General Social Survey (GSS), a large biennial in-person survey of the demographic characteristics and attitudes of Americans that has been conducted since 1972.2 The GSS records the respondent's political party identification, ideological positions, and opinions on the spending levels of various government programs as well as the place of birth of the respondents, their parents, and their grandparents. The political opinions of the immigrants and their descendants can be measured directly in the GSS, which produces more accurate results than other polling methods.3 The first-, second-, third-, and fourth-generation or greater categories are defined in Table 1.

Measuring the Political Assimilation of Immigrants and Their Descendants We compare the political party identifications, ideological identifications, and policy preferences of first- , second- , third-, and fourth-generation Americans. The GSS asks only two questions about political party and ideological identification, so we included those responses in our review. For policy preferences, we selected the most controversial areas affecting government spending— such as levels of taxation and welfare spending—that divide Americans ideologically. These issues reveal more about potential differences among the groups in our study than would be the case of narrower questions such as how much should be spent on the space program, mass transit, or parks and recreation. We also check whether each generation's opinions can be explained by random variation or if the differences vary in a statistically significant4 way from the fourth generation. If the variations of any generation can be explained by random chance compared to the fourth generation, then the opinions of the generation in question do not vary in a statistically significant way compared to the fourth generation. In other words, the political differences between the generations are very small or nonexistent if the comparison is statistically insignificant. 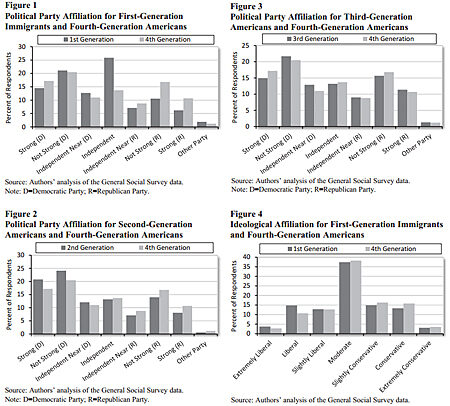 Public Policies
This section analyzes responses from each generation on specific policy questions. The first question is whether the government should do more or less (see Figure 7). This very general question produces what appears to be a startling difference between the first generation and subsequent generations. To a statistically significant extent, the first generation is more likely to say that the government should do more. The responses for the second and third generations are statistically indistinguishable from the fourth generation. The first generation's support for a more active government is noteworthy but general survey questions such as this are poor at gauging actual policy preferences. Questions about specific policies produce a more accurate picture of immigrant policy preferences. 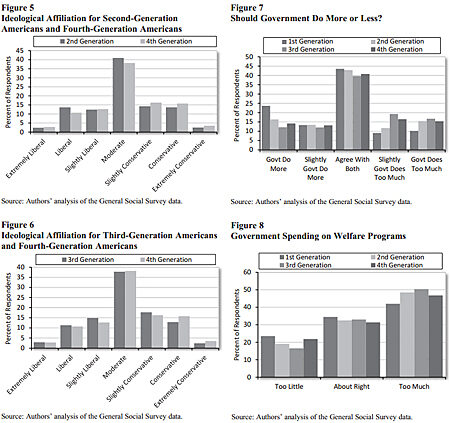 Responses to the following specific policy questions reveal that immigrants and subsequent generations have policy opinions that are very similar to fourth-generation Americans on government spending on welfare programs (Figure 8), federal income taxes (Figure 9) government assistance to the poor (Figure 10), and Social Security benefit levels (Figure 11). For Figures 8–11, the responses by the first, second, and third generations all differ to a statistically insignificant extent compared to the fourth generation.

Conclusion
Immigrants have very similar political and policy views when compared to fourth-generation Americans. For those policy and political questions where first-generation immigrants have statistically significant differences of opinions, the second and third generations do not vary compared to the fourth generation, meaning that political assimilation is complete by the second generation. Immigrants are rapidly assimilating into American political life without upsetting the current ideological and political balance. The rapid pace of political and ideological assimilation of immigrants and their children should assuage the concerns of those who oppose immigration reform for this reason. 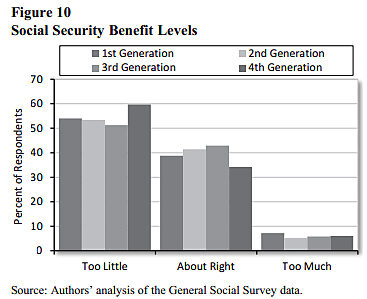 Criminal Immigrants in 2017: Their Numbers, Demographics, and Countries of Origin