Change is coming to the Consumer Financial Protection Bureau (CFPB).

Established in the wake of the financial crisis, the CFPB courted controversy from the start. As an independent agency headed by a single director who could only be dismissed for negligence or malfeasance, the bureau enjoyed an autonomy unprecedented in U.S. regulatory history.

Judge Brett Kavanaugh from the D.C. Circuit Court of Appeals wrote that “[the CFPB’s] Director enjoys more unilateral authority than any other officer […] of the U.S. Government, other than the President.”

A greater focus on competition and consumer welfare might help the bureau to resist the temptation to overregulate.

Kavanaugh was not exaggerating. Congress and the Trump administration should make the CFPB a priority of regulatory reform, so that it becomes more accountable, less activist and truly independent.

Not only is the power of the director awesome, but it has been used to partisan effect since the CFPB's inception. The first director, Richard Cordray, set about remaking American consumer finance by slapping punitive fines on providers and broadening the CFPB's remit to include, among others, auto dealerships.

Under his direction, the bureau introduced a rule to restrict arbitration clauses in financial contracts, an intervention that would likely have raised the cost of credit.

Cordray also championed measures to severely constrain payday lending, an expensive form of short-term borrowing that can nonetheless be a lifeline for borrowers who have run out of options.

Indeed, throughout the CFPB's first five years of existence, Cordray made little effort to dispel the fear among financial providers that the bureau was out to get them.

This may have been Cordray's understanding of what the CFPB ought legitimately to do. Yet, in combination with the absence of effective checks and balances, his proclivity for regulatory intervention invariably created uncertainty.

Cordray eventually resigned, and President Trump in November appointed Mick Mulvaney  as interim director. Mulvaney, a Republican and long-time skeptic of the bureau, clearly relishes the chance to turn the exceptional powers granted him as director against those who conceived the CFPB.

Indeed, despite its nominal independence from Congress, the bureau is a textbook example of political capture by whomever happens to be in charge. To his credit, Mulvaney is not just busying himself with reversing Cordray's initiatives but is also proposing ways to increase the CFPB's accountability.

In a letter to Congress last week, Mulvaney asked lawmakers to fund the bureau through congressional appropriations rather than grants from the Federal Reserve and to make the director removable at will by the president.

These reforms would make the CFPB more akin to other executive agencies. However, Mulvaney's proposed fixes would do little to depoliticize the agency, instead turning it into a powerful arm of temporary powers in Congress and the White House. 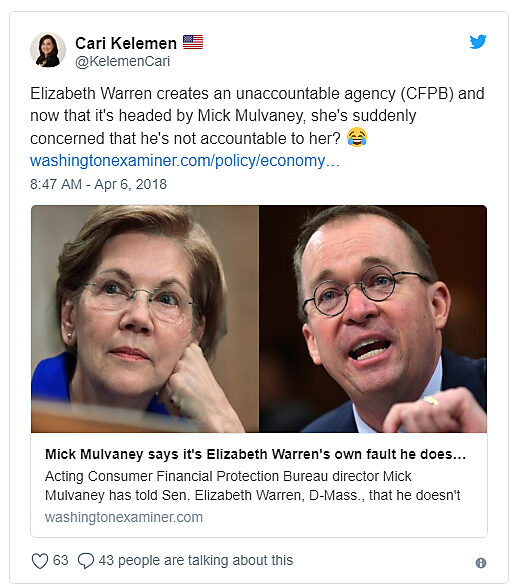 Consumer finance is an area particularly in need of legislative certainty, because it involves critical sources of short-term funding for households and is currently undergoing substantial disruption from online lenders and greater use of data in credit allocation.

Furthermore, the most prolific users of products regulated by the CFPB, such as short-term lenders, debt collectors and mortgage servicers, are people on low and middle incomes.

Politicization is not the CFPB's only weak point. The bureau has devoted precious little effort to ensuring that regulation does not stand in the way of innovation and choice. Yet, as a rule, firms should be allowed to offer a range of products, and consumers should have the freedom to choose.

So, what could Congress do to ensure that balance?

To begin, Congress could turn the bureau from a single-director agency into a multi-member board, like the Securities Exchange Commission and the Fed. This would ensure representation of alternative viewpoints at all times.

The smooth transition from Democratic appointee Janet Yellen to Republican Jay Powell at the Fed last month was clearly helped by the Fed board's collegial process of decision-making.

Additionally, Congress should consider moving the bureau from the Fed to the Federal Trade Commission. The Fed's regulatory remit involves prudential regulation and financial stability; that is, making sure bank balance sheets can withstand losses and, if they don't, that contagion is minimized.

The FTC's mission, on the other hand, is to protect consumers and promote competition. The CFPB's role better matches the FTC's because it involves not risk minimization but protecting the financial well-being of consumers.

A greater focus on competition and consumer welfare, moreover, might help the bureau to resist the temptation to overregulate.

There is a case for abolishing the CFPB. The products and providers that the bureau regulates did not cause the crisis. Furthermore, to the extent that there is abuse, it might be better tackled by state-level agencies or other federal watchdogs.

But if the bureau remains in existence, it must be turned from foe into enabler of consumer finance.