When the Dow breached the historic 20,000 mark, it was as if we had entered a brave new world without bears, business cycles, or traditional red flags. With the Dow at over 21,000 today, this raises the question: are we in a bubble?

Wall Street's new paradigm reminds me of a similarly Panglossian time: the late 1920s, when Yale Professor Irving Fisher, perhaps the greatest economist of his era, confidently proclaimed that stock prices were at a "permanently high plateau." Fisher, then 62 and a man of strong convictions, staked his reputation and fortune on an unwavering optimism about the economy and stock prices. Alas, the 1929 crash vaporized Fisher's $10 million fortune and cast a cloud over his reputation.

Thinking about both the 1929 and the current market, I went to my files to retrieve some correspondence I received in August 1996 from another great economist — a late Nobelist no less. Asking to remain anonymous (I'll call him "Dr. X"), he enclosed for my amusement what he called a "bubble detector."

After giving Dr. X's bubble detector some serious attention, I was far from amused. Since 1987, the readings on the bubble detector zig and zag, with an occasional "high" reading, signaling a potential bubble. As seen in the chart below, previous high points correspond with subsequent dips in the stock market and major recessions that occurred during that time period. 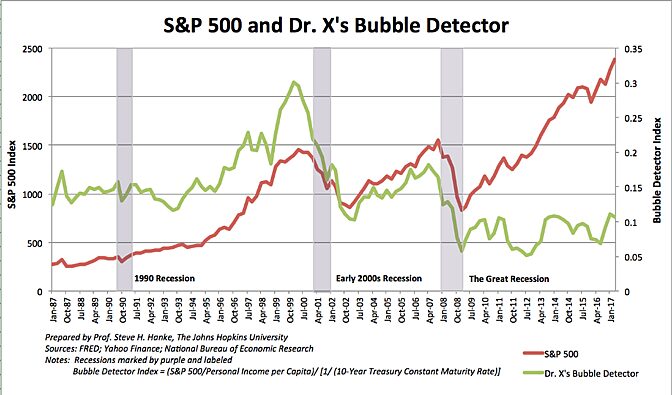 So, just what is Dr. X's bubble detector? It is the wealth-to-income ratio for stocks divided by the same ratio for bonds. The wealth-to-income ratio indicates the length of time it takes for a constant flow of income to "purchase" a given stock of income-producing assets — 1,000 shares of Royal Dutch Shell, say, or 1,000 T-Bills. As the ratio increases, more time is required to purchase a source of income, implying that assets are becoming more expensive relative to income.  Therefore, the bubble detector essentially measures the value of equities relative to that of fixed income securities.

As a proxy for the wealth/income ratio for stocks, Dr. X used the ratio of the Standard & Poor's 500 (S&P 500) to personal income per capita. If stock prices rise and income stays the same, the wealth/income ratio for stocks increases, and it takes more time to purchase a given quantity of stocks. As of April 2017, which is the most current data point calculable for the bubble detector, this component is 2,384.2/$50,548, or 0.04717. The proxy for bonds is the reciprocal of the ten-year Treasury bill rate, or 1/(interest rate). This component is 1/2.26, or 0.4425.

The current value is slightly below the average since 2000. This "low" value, depicted in the chart below, means that now is a relatively good time to buy $1 worth of stock earnings and not a good time to buy $1 worth of bond interest. In short, Dr. X's bubble detector is not signaling a stock market bubble — far from it. That said, we should never forget poor old Irving Fisher. 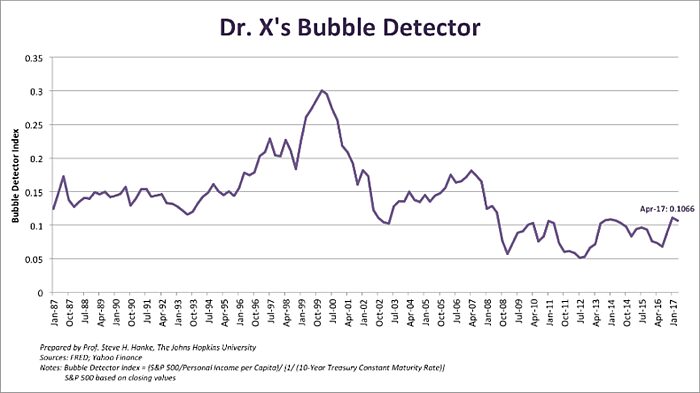