There are many jokes about economists (they’ve correctly predicted nine out of the past five recessions) and many of them are well‐​deserved. Simply stated, we make lots of bad predictions, and we often can’t utter a sentence without endless caveats (hence, Truman’s jibe about wanting a one‐​armed economist so he didn’t have to hear “on the other hand…”).

What’s the recipe for higher productivity? Well, it’s not that complicated. We need more investment.

But one thing that presumably unites economists is that we all recognize higher productivity is a good thing. It’s what enables higher wages for workers, higher earnings for companies and higher living standards for the nation.

So when we see weak productivity numbers, that’s not good news. According to Labor Department data, there is a very worrisome trend this century. Productivity is increasing, but at ever-lower rates, which helps to explain why the overall rate of economic growth this century has lagged compared to the post-World War II average.

So what’s the recipe for higher productivity? Well, it’s not that complicated. We need more investment. Specifically, we need more “physical capital,” since workers can produce more and earn more when they work with newer and better machinery, equipment and technology. We also need more “human capital,” since a better educated workforce has a greater ability to produce and therefore earn.

The desire for more investment is one of the reasons why tax reform could be so beneficial. Many people focus on how a lower corporate tax rate will make the United States more competitive in a global economy. That’s certainly true, but a key reason for a lower rate is that investors will have a bigger incentive to finance new projects that will boost productivity and thus boost wages.

Similarly, the proposal by House Republicans to replace “depreciation” with “expensing” would be particularly helpful since the current approach imposes an unwarranted tax on new investments.

It also would be a good idea to reduce or eliminate the capital gains tax and death tax since those levies contribute to a system that imposes disproportionate burdens on income that is saved and invested compared to income that is immediately consumed.

Regulatory reform also would be helpful. Many regulations impose high costs on investors, entrepreneurs and business owners. Such added costs can be justified if there are compensating benefits, but much of the red tape that now exists does not pass a cost-benefit test. 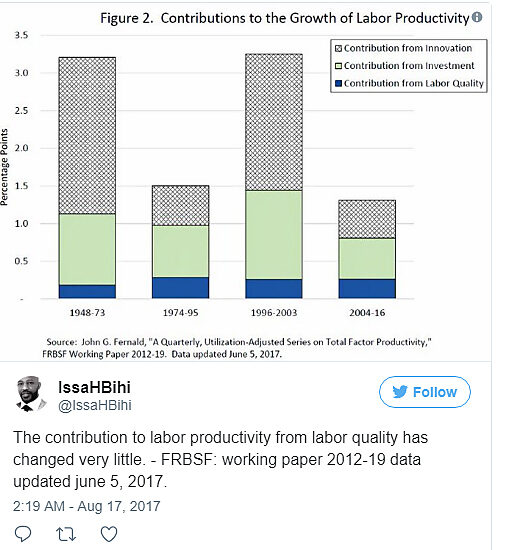 It’s important not to overlook human capital. The United States spends more on education — on a per-pupil basis — than other nations. Yet, international test scores show that we get very mediocre results. We see a similar pattern inside the country, with high levels of spending associated with more bureaucracy rather than better outcomes.

Perhaps it’s time to unleash the power of markets by allowing greater school choice. There’s certainly plenty of evidence that this approach will be more effective at boosting human capital compared to government-run schools.

I would add another point: We also need more social capital or cultural capital. By this, I mean that the economy will do better and enjoy higher productivity if we have a stronger work ethic and a greater spirit of self-reliance, which explains why a growing welfare state is very corrosive to a nation’s long-run prosperity.

What matters is the direction of policy, not whether politicians have an “R” or “D” after their names.