Perhaps unexpectedly, the beautiful northern European country of Denmark emerged as a topic of conversation during this week’s Democratic Party presidential debate. The small Scandinavian monarchy plays an important role in progressive mythology. It is a place many liberals want America to become, and both Bernie Sanders and Hillary Clinton sung its praises during the debate. A closer look at Denmark’s public policies is, therefore, warranted. It yields some surprising results.

Second, in some important ways, Denmark is not the socialist paradise Sanders imagines. The World Bank’s “Doing Business” report measures the ease of doing business around the world on a scale from 0 (worst) to 100 (best). In 2015, Denmark scored 84.2, while the United States scored 81.98. As such, Denmark had the fourth most-welcoming business environment in the world and the United States the seventh. Put differently, Denmark is embracing the private sector with greater gusto than the land of the free and the home of the brave. 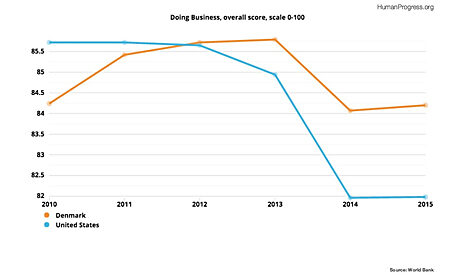 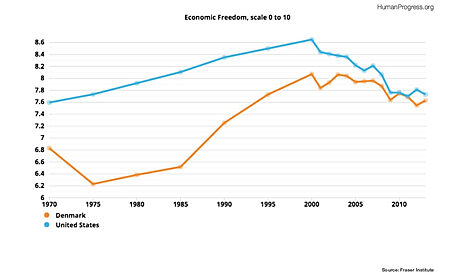 Crucially for Sanders, long an unabashed protectionist, and Clinton, who has recently backpedaled her support for trade liberalization, Danish trade with the rest of the world is much freer than America's. Again turning to Canada's Fraser Institute, Denmark had the world's fourteenth most liberal trade regime in 2013. The United States came in a miserable forty-first place out of 115 countries surveyed. 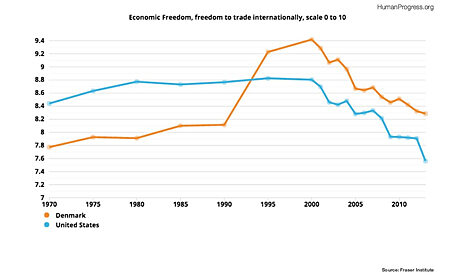 Of course, there are other important differences between the United States and Denmark. And none more relevant than the “size of government,” a proxy measure for taxation and redistribution. Of the 123 countries surveyed by the Fraser Institute, Denmark came in one hundred and nineteenth, while the United States came in fifty-fifth. 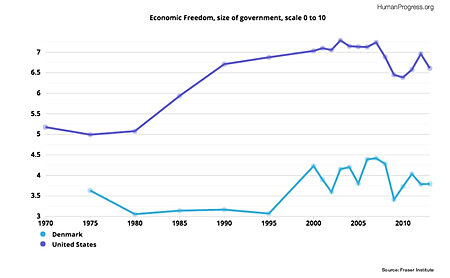 If this is what Sanders means by wanting America to resemble Denmark, he needs to be careful about the unintended consequences of a large increase in taxation and welfare spending.

To be, or not to be Denmark? That, apparently, is the question for Democratic presidential candidates.

As people grow more reliant on the state, they tend to see the arrival of newcomers as threatening. Immigration, for example, is thus increasingly seen as a zero‐​sum game. Not surprisingly, the Danes have grown more hostile to immigration as the number of immigrants to Denmark increased.

The Danish response to immigration is consistent with the research by Alberto Alesina of Harvard University, who pointed out the correlation between relatively high levels of taxation and redistribution, and homogeneity of the local population.

Denmark is a perfect example of a homogenous polity with a large welfare state. Of the 5.7 million people who live in Denmark, 88 percent are of Danish (Nordic) descent and 78 percent belong to the Danish Lutheran Church.

Creating a large welfare state, in other words, can heighten animosities between indigenous population and immigrants, or distinct religious and ethnic groups. Sanders ought to appreciate that the Danish level of taxation and redistribution would likely result in greater hostility toward immigrants and greater social strife in the United States as well.

In many ways, Denmark is a magnificent country, and the Danes rank among the happiest people on the planet. But Denmark is neither the socialist paradise Sanders makes it out to be, nor is its size of government a good role model for the United States.

As Far as Midterms Go, Turns out It Is Not ‘the Economy, Stupid’, After All

Divided by Party, United in Spirit