There is an all‐​too‐​common tendency for humans (particularly members of the political class) to blame or scapegoat others when they bungle their jobs. We are now being treated to the meeting of the Group of Eight — where the “leaders” of eight major countries are looking for excuses for why they have made such a mess of their own economies. Rather than acknowledge that the reason for such poor performance is excessive government spending, taxation and regulation, members of the G‑8 are blaming their ills on lower‐​tax jurisdictions, which they pejoratively label “tax havens.”

In fact, all of the so-called tax havens have substantial taxes and significant government sectors. They also tend to have lower marginal tax rates on capital and labor income, which has enabled them to make their citizens rich and healthy. Many studies show that when government spending exceeds approximately 25 percent of gross domestic product, economic growth tends to slow, fewer jobs are created and the general welfare ultimately declines. If the G-8 had responsible leaders, the group’s summit would have as an agenda item “ways to downsize government.” Instead, their agenda includes how to increase tax revenue by going after jurisdictions with low tax rates. They disguise these schemes by using the phrases “increasing tax-base harmonization,” “tax information sharing” and “tax transparency.”

As can be seen in the accompanying table, low unemployment rates tend to be associated with smaller government sectors, and vice versa. This relationship can be shown with most governments over time and with cross-sectional studies. Many British overseas territories such as the Cayman Islands are attacked because they have no corporate and individual income taxes, and never have. They are not shown in the table because they are not totally independent from the United Kingdom.

Hong Kong and Singapore, which are former British colonies, have been successful by maintaining the British common-law legal system, coupled with low maximum marginal tax rates on income — 15 percent in Hong Kong and 20 percent in Singapore — low levels of economic regulation and limited government. Forty years ago, these jurisdictions were poor and without natural resources. They did have economic freedom, though, and relatively low levels of corruption. Now Hong Kong has a per-capita income close to that of the United States, and Singapore’s real per-capita income is substantially higher than that of the average American.

If big government were the key to economic success, France, with more than half of its GDP accounted for by government, would have rapid economic growth rather than an unemployment rate of 11 percent and negative growth. Yet France, Britain and the United States are demanding that the low-tax jurisdictions increase their taxes on businesses. They also demand more tax information sharing among countries. The officials of the G-8 assure us — as if they think we are all children or fools — that sensitive company and individual tax information will be kept confidential and not be used for political targeting, extortion, etc. The U.S. Internal Revenue Service had a reputation for being less corrupt and less incompetent than tax agencies in many other countries, which only illustrates how low the global standard is. 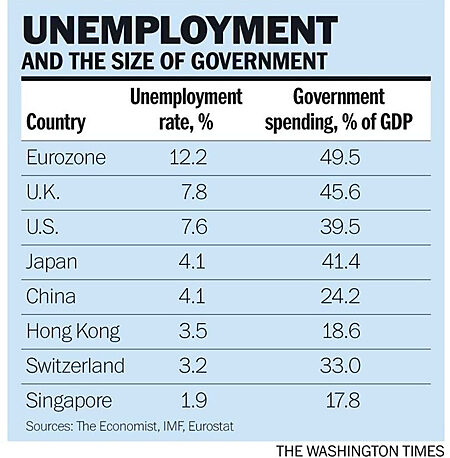 More tax information sharing among governments will be used to favor some businesses over others and to damage political opponents. We saw this happen in the United States as tax information was released illegally by people in the IRS to hurt Mitt Romney’s business and major individual donors. Corrupt officials — as we have seen in Latin America and elsewhere — will release selected information to kidnappers, extortionists and others who mean ill.

Two realities are being ignored by the political class at the G-8 and all too many in the news media who are covering the event. The first is that Europe and America already are taxed out. Only in the very short run can governments get any more tax revenue. In the longer run, higher tax rates will further depress work, saving and investment, resulting in more economic stagnation and no real net new revenue and higher, not lower, debt.

The other reality that is being ignored is that more government revenue is not needed to maximize the well-being of the citizens. By almost any measure, personal well-being — life expectancies, living standards and personal choices — is increasing far more rapidly in the smaller-government, lower-tax states than in the big-government states.

Any agreement among the G-8 to increase tax information sharing among governments will only serve to put everyone at greater personal risk. That, of course, is of little concern to political leaders hellbent on increasing their own power.

Some whine about the costs of all of the drinking and eating by the attendees at the G-8. In reality, our pocketbooks and our liberties would be much safer if those at the G-8 meeting ate and drank more, so they would be incapable of doing any business at all. That would be a small price to pay.