Skip to main content
Live Now
This article appeared on Forbes​.com on May 24, 2018.
TOP

For the Turkish lira (TRY), the month of May has been brutal. It has seen the lira shed 15% of its value against the U.S. dollar (USD). This is a big move, and an important one. Indeed, I have repeatedly warned that the lira was President Recep Tayyip Erdogan’s Achilles’ heel.

Since Erdogan became President in August of 2014, the lira has lost a stunning 56% of its value against the greenback. And, just since May 14th, when Erdogan announced that he planned to grab Turkey's monetary policy levers, the lira has depreciated almost 10% against the USD. 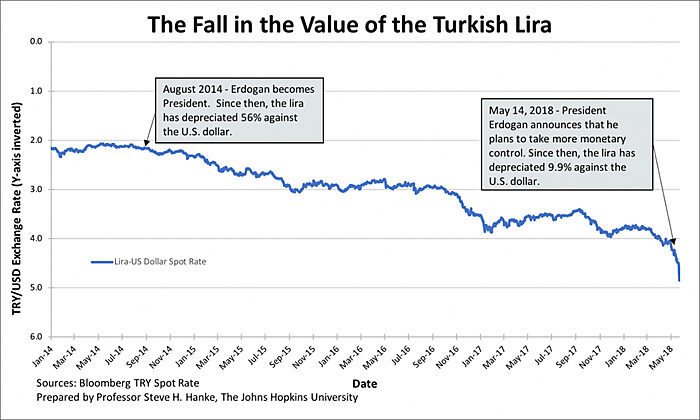 With the collapse of the lira, Turkey's inflation has surged. The most important price in an economy is the exchange rate between the local currency and the world's reserve currency — the U.S. dollar. Changes in the exchange rate can be reliably transformed into accurate estimates of countrywide inflation rates. The economic principle of Purchasing Power Parity (PPP) allows for this transformation. 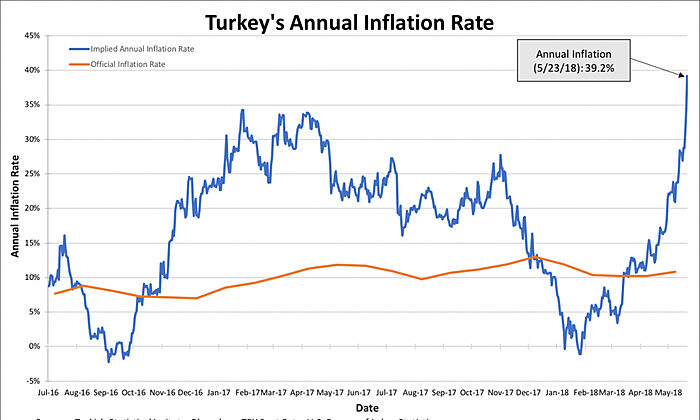 Just what lies behind the lira's weakness? Well, it's all about supply and demand. On the supply side, the Central Bank of the Republic of Turkey has been too loose, for too long. And that was before Erdogan indicated that he wanted to get his hands on the tiller, so that he could goose the money supply. By employing the tried and true Quantity Theory of Money (QTM), we know that that conclusion is on firm ground.

This supply-side quantity problem has been accompanied by a quality problem, too. Indeed, the quality of the money supply (high-powered reserve money) has been deteriorating since 2008. Since the summer of 2009, the net foreign reserves of the Central Bank’s balance sheet have plunged from over 100% of reserve money into negative territory. To keep the money supply growing, the Central Bank has replaced its disappearing foreign assets with lira-denominated assets. That ugly picture is shown below. 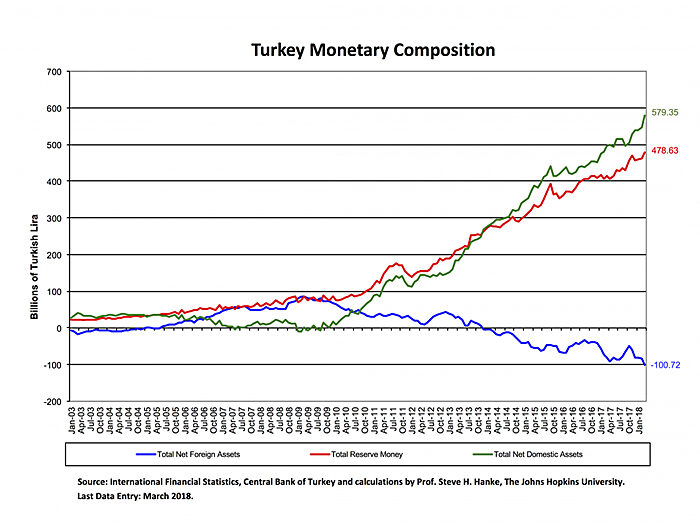 So, the supply-side picture is “lira negative” (read: too much low-quality money). What about demand? Until recently, the so-called “carry trade” has kept the lira’s head barely above water. That trade is one in which speculators invest in lira-denominated assets, which yield higher interest rates than those of a funding currency. For example, the Japanese, until the past few days, have embraced the carry trade -- big-time. The Japanese fund the purchase of “high” yielding lira denominated assets by borrowing at very “low” rates in yen. As long as the lira’s depreciation doesn’t eat up all the spread associated with the carry trade, the Japanese are happy. Obviously, the wider the spread, the happier they are, and the greater the demand for the lira. But, of late, the spread has narrowed. Indeed, it is now narrower than at any time since January 2017. In consequence, the carry trade has become unattractive, and the demand for the lira has dried up.

The lira picture is then one of too much low-quality supply and an anemic demand. With President Erdogan at the helm, that picture is not likely to change. It is unlikely that the Central Bank will put the brakes on the growth of the money supply. It is also unlikely that Erdogan will condone the much higher interest rates that would be required to make the carry trade attractive again. To ramp-up the carry trade and stimulate the demand for lira, interest rates would have to be north of my measured inflation rate of almost 40%. Not a pretty picture.