Did you know that there are more than 6,000 think tanks globally, and about 2,000 in the United States? In the past two weeks, two major rankings of think tanks have been released.

A think tank is an organization where scholars and specialists seek to find solutions to problems and then promote their findings. Some think tanks deal with many public policy issues, and others concentrate on one or a few, such as medical care, defense, foreign policy or economic policy. The largest and best‐​known think tanks often have more than 100 employees with budgets of tens of millions of dollars, while most are small and specialized, with only a handful of employees.

Without them, governments would waste even more on foolish and counterproductive activities and everyone would be less free.

Both the number and size of think tanks has grown exponentially in the past several decades. One reason is the growth of governments, which has created a need for organizations to feed government policymakers with ideas and information — and, more importantly, to fulfill the need for independent research to critique the many bad ideas emanating from policymakers, politicians and the media. For instance, a fellow at the American Enterprise Institute, Peter Wallison, a former general counsel of the U.S. Treasury, has just written a book explaining, with all the supporting evidence, how a politically inspired, false narrative about the financial crisis led to the destructive Dodd‐​Frank Act and what corrective action is needed.

Another reason for the rise of think tanks has been the failure of most universities to fulfill one of their traditional roles of providing unbiased and sound research to aid government policymakers. Too many schools are now engaged in politically correct group‐​think rather than free and innovative thought.

There is no totally objective way to rank think tanks, and, not surprisingly, those who presented the most recent rankings took different approaches. 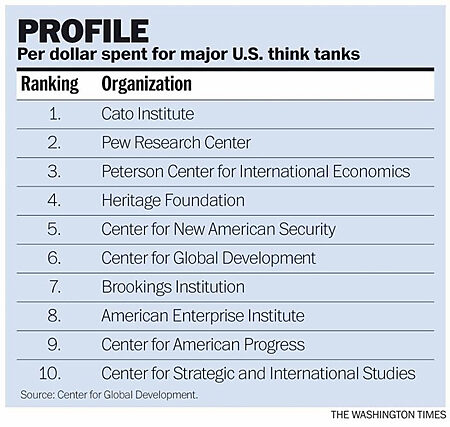 On Jan. 13, the Center for Global Development released its index of U.S. think tanks (note the accompanying chart), which was based on measurable criteria, such as media mentions, Web traffic, social media fans, and scholarly citations per dollar spent. By this measure, the Cato Institute was No. 1.

On Jan. 24, the University of Pennsylvania Think Tanks and Civil Societies Program released its rankings, based on the more subjective opinions of hundreds of journalists, policymakers and think tank employees. By this measure, the Brookings Institution was ranked No. 1 and Cato No. 10. I prefer the Center for Global Development’s approach because I am a numbers guy and am biased toward Cato, where I am one of several dozen nonstaff fellows.

Any think tank that finds itself in the top 100 in the United States or globally, by either measure, has much to be proud of because it is both a tough and highly competitive business. Like other organizations, the success of a think tank is largely the result of its top leadership. A successful think tank head has to have a number of rare skills in abundance. He needs to be an accomplished fundraiser, manager, public spokesman with a good sense of humor, and one who deeply understands and can articulate the many issues with which the think tank deals. He also needs to recruit the best and most articulate scholars in each area of specialty. Very few people have all of these skills.

Ed Crane, who has just retired after building Cato from its founding 34 years ago to its No. 1 rank today, is the epitome of what a think tank leader should be. Mr. Crane had a very clear vision for Cato, and that is “to increase the understanding of public policies based on the principles of the American Revolution, including limited government, free markets, individual liberty, the rule of law and peace.” Cato is most often viewed as the world’s largest and most influential libertarian think tank. Its success can be in part measured by the increasing number of people who now define themselves as having libertarian leanings, much like the country’s Founding Fathers, who provided a structure for enduring prosperity and liberty, based on limited government, individual liberty and the rule of law.

A good leader, upon retirement, turns the organization over to another exceptional leader. In Cato’s case, the new president is John Allison, a well‐​known libertarian business leader, who, as the longtime CEO of BB&T Corp, built it into the nation’s 10th‐​largest financial corporation. Another example is Ed Feulner, who, having built the Heritage Foundation over the past 35 years into one of biggest and most influential think tanks, will soon turn over the helm to the highly principled former South Carolina Sen. Jim DeMint.

Cato, Heritage, American Enterprise Institute and other free‐​market think tanks rely on voluntary contributions to support their work. Donors to these organizations are farsighted enough to understand that without them, governments would waste even more on foolish and counterproductive activities and everyone would be less free.