If McDonald’s suddenly cuts the price of its French fries in half, would its store profits fall or rise? If the price cut caused more people to come to its stores and spend more on other items, such as Big Macs, revenues and profits might rise, provided that competitors do not cut their prices in response. Airlines have learned to adjust their prices for each flight and almost each seat on what seems to be an hourly basis, depending on supply and demand, all in the interest of maximizing profit.

Any business person who does not understand the laws of supply and demand will soon go bankrupt. It is only the political class who fails to (or wishes not to) understand this basic economic concept, particularly when it comes to tax rates. Politicians get away with destructive tax policies because they know that many voters are grossly ignorant when it comes to basic economics.

Those who have not studied economics often rely on the press, who are often equally ignorant of economics and, hence, are unable to differentiate between sense and nonsense. While The Wall Street Journal (and particularly the editorial page) normally gets it right, The New York Times and many other newspapers too often let political bias get in the way of the facts.

It is particularly disappointing when a former great newsmagazine, The Economist, allows very sloppy reporting and analysis on serious economic topics. This week, The Economist published an article on the tax reform proposals of the Republican candidates in which it charges all of them of putting forth "hugely expensive" plans before "accounting for economic effects." The whole point of tax reform is to reduce the economic drag of the current tax code — which The Economist correctly describes as a mess. But the article implies that higher tax rates will always bring in more revenue (which they appear to view as desirable) and lower tax rates will bring in less revenue. For very low rates that is true, but for high rates, it is false. 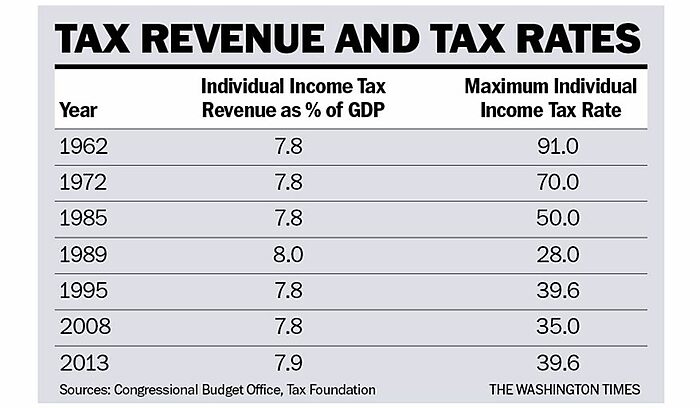 Given that too many in the press (including the economic press) have forgotten basic lessons, as the New Year begins they are worth repeating. Beyond some point, increases in government spending and regulatory costs as a percentage of GDP reduce economic growth and the general welfare — because of the disincentives for productive work built into many government programs, and poor management due to the lack of competition and cronyism. Many empirical studies have shown that most governments, including the U.S. government, are well beyond the optimal size.

It would be helpful if presidential candidates would lay out their plans to reduce or even increase the size of government to whatever level they wish to argue is appropriate. (Most of the evidence shows that when size of government is roughly more than a quarter of the economy, it makes things worse rather than better.) Candidates should then explain what combination of taxes, user fees, regulation and borrowing they recommend to fund their proposals.

Tax economists are now analyzing and debating the alternative tax plans set forth by the candidates — including expected tax revenues over the long run. For instance, Sen. Marco Rubio’s plan, while very good on the business side, has been correctly criticized for having a maximum individual tax rate (for political reasons, as his advisers admit) above the revenue- and welfare-maximizing size — which The Economist appears to applaud.

Those who advocate higher tax rates on the rich, such as Bernard Sanders and Hillary Clinton, ignore the fact that the rich already pay a grossly disproportionate share of income taxes. And given enough time, the rich invariably find legal and nonlegal ways of minimizing their tax burdens — including moving to low-tax jurisdictions or even dropping out of the work force — which is why it is hard to find any of them paying more than 20 percent of their income (correctly measured) over long periods of time anyplace in the world. Many countries, particularly in Eastern Europe, have adopted low-rate, flat-tax systems, because, having experienced the misery of socialism, they understand that class warfare and big government are a formula for disaster. This lesson seems to have been lost on many in the political class in the United States, old Europe and, unfortunately, even the current crop of writers at The Economist.