Once again, Donald Trump has kicked off a media firestorm with a series of early‐​morning Tweets, this time leveling the serious accusation that “President Obama had my ‘wires tapped’ in Trump Tower” just prior to the presidential election. 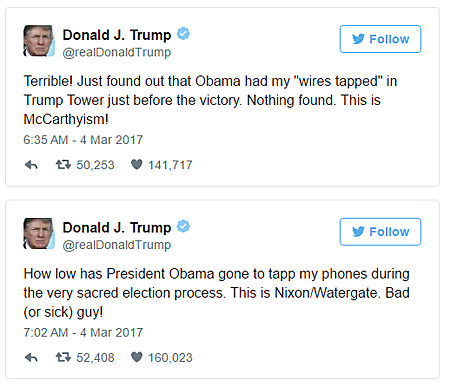 Though Trump asserted he had “just found out” about this surveillance, he appears to be referencing a series of reports that began with a piece by Louise Mensch in Heat Street back in November, which was later corroborated by articles published by The Guardian and the BBC in January. The reports may have come to Trump’s attention by way of a Breitbart story that ran on Friday, summarizing claims of a “Deep State” effort to undermine the Trump administration advanced by conservative talk radio host Mark Levin.

If it were true that President Obama had ordered the intelligence community to “tapp” Trump’s phones for political reasons, that would of course be a serious scandal—and crime—of Nixonian proportions. Yet there’s nothing in the published reports—vague though they are—to support such a dramatic allegation. Let’s try to sort out what we do know.

First, as one would hope Trump is aware, presidents are not supposed to personally order electronic surveillance of particular domestic targets, and the Obama camp has, unsurprisingly, issued a statement denying they did anything of the sort:

Neither President Obama nor any White House official ever ordered surveillance on any U.S. citizen. Any suggestion otherwise is simply false.

Rather, the allegation made by various news sources is that, in connection with a multi‐​agency intelligence investigation of Russian interference with the presidential election, the FBI sought an order from the Foreign Intelligence Surveillance Court authorizing them to monitor transactions between two Russian banks and four persons connected with the Trump campaign. The Guardian‘s report alleges that initial applications submitted over the summer, naming “four members of the Trump team suspected of irregular contacts with Russian officials,” were rejected by the FISC. But according to the BBC, a narrower order naming only the Russian banks as direct targets was ultimately approved by the FISC in October. While the BBC report suggests that the surveillance was meant to ferret out “transfers of money,” the Mensch article asserts that a “warrant was granted to look at the full content of emails and other related documents that may concern US persons.”

Taking all these claims with the appropriate sodium chloride seasoning, what can we infer? First, contrary to what many on social media—and even a few reporters for reputable outlets—have asserted, the issuance of a FISA order does not imply that the FBI established probable cause to believe that any Trump associate was acting as an “agent of a foreign power” or engaged in criminal wrongdoing. That would be necessary only if the court had authorized direct electronic surveillance of a United States person, which (if we credit the BBC report) the FISC apparently declined to do. Assuming the initial applications were indeed for full‐​blown electronic surveillance orders, then the fact that the FBI supposedly did name the Trump associates at first would suggest they may have thought they had such evidence, but one would expect the FISC to apply particularly exacting scrutiny to an application naming persons associated with an ongoing presidential campaign. An application targeting only foreign corporate entities—especially entities openly controlled or directed by the Russian government—would require no such showing, even if the FBI’s ultimate interest were in communications concerning those U.S. persons.

Both Breitbart and Trump have advanced claims far more dramatic than anything the public evidence can support.

It’s worth noting here that, contra Trump’s claim on Twitter, none of the articles in question claim that phones were tapped. Indeed, it’s not even entirely clear that the order the FISC finally issued in October was a full‐​blown electronic surveillance warrant requiring a probable cause showing. If the FBI was primarily interested in obtaining financial transaction records, corporate documents, and (depending on both the facts and the FISC’s interpretation of the FISA statute) perhaps even some stored e‐​mail communications, that information might well have been obtainable pursuant to a §215 “business records” order, which imposes only the much weaker requirement that the records sought be “relevant to an authorized investigation.” The BBC’s use of the word “intercept” to describe the investigators’ aim, as well as Mensch’s characterization of the order as a “warrant,” both suggest full‐​blown electronic surveillance, but reporters aren’t always particularly meticulous about their use of legal terms of art, and similarly, sources with indirect knowledge of an investigation may not be scrupulously exact about the distinction between an “order” and a “warrant.”

In either event, there’s nothing here to suggest either the direct involvement of President Obama nor any clear indication of a violation of the law. If, however, the primary purpose of the investigation was to build a criminal case against U.S. persons in the Trump camp, then the use of FISA authorities to gather information by naming foreign entities sounds like “reverse targeting”—tasking collection on a foreign target when your real interest is a U.S. person with whom they’re communicating. That would be, to use the technical term, highly shady even if not unlawful. Thanks to the Patriot Act, however, FISA authorities may be used in investigations that have a “significant” foreign intelligence purpose, even if the “primary” purpose is criminal prosecution—a change from the prior standard imposed by the courts, which had required that foreign intelligence be the “primary” purpose of surveillance under the aegis of FISA, precisely to prevent authorities from evading the stricter requirements imposed by Title III, the statute that covers wiretapping for domestic criminal investigations.

All that said, let’s circle back to Breitbart’s gloss on the Intelligence Community’s investigation of the Trump campaign:

In summary: the Obama administration sought, and eventually obtained, authorization to eavesdrop on the Trump campaign; continued monitoring the Trump team even when no evidence of wrongdoing was found; then relaxed the NSA rules to allow evidence to be shared widely within the government, virtually ensuring that the information, including the conversations of private citizens, would be leaked to the media.

None of this is really supported by the public record. First, the attribution of whatever monitoring occurred to the “Obama administration” insinuates a degree of involvement by the White House or its political appointees for which there is no evidence. “Eavesdrop” implies surveillance of telephone conversations, which do not appear to have been the focus of the FISC order. (As is now well known, the intelligence community did intercept telephone conversations between former National Security Adviser Mike Flynn and the Russian ambassador—but as a result of routine collection on an acknowledged foreign agent, not surveillance targeting Flynn himself.) Neither is there any evidence that authorization was sought to collect on “the Trump campaign” per se; rather, the BBC’s report claims that the application ultimately rejected by the FISC focused on “four members of the Trump team.” Mensch’s original report asserts that Trump was “named” in the initial application, but is vague as to whether that means he was a named target of electronic surveillance. (Since, again, that would entail showing that Trump himself was an “agent of a foreign power, ” this seems improbable unless the FBI has managed to keep some explosive evidence under wraps in the leakiest political environment I can recall.) “Continued monitoring” implies some nefarious motive, but a standard FISA surveillance order would run for either 90 days (if targeting a U.S. person) or 120 days (if targeting a non-U.S. person), so there’s nothing particularly extraordinary in that.

The claim that the administration then “relaxed the NSA rules to allow evidence to be shared widely within the government” is presumably a reference to the revised guidelines for intelligence sharing issued in January. First, this revision was first publicly announced in February of last year, and had been in the works since long before any inquiry into Russian election interference began. Second, it applies to raw signals intelligence obtained by NSA pursuant to Executive Order 12333, not to intelligence gathered by the FBI under the authority of a FISA court order. Third, there is no evidence whatever that any of the intelligence leaks that have made headlines in recent weeks are connected with the revised guidelines—and, indeed, this seems rather unlikely, since most of those leaks have concerned information disseminated in “finished” intelligence reports, not the “raw” signals intelligence to which the new guidelines apply.

In short, both Breitbart and Trump have advanced claims far more dramatic than anything the public evidence can support. That said, intelligence monitoring—whether direct or indirect—of persons connected with a presidential campaign inherently carries a high risk of abuse, and as Congress moves to launch its own inquiries into the Trump campaign’s Russian ties, it would be entirely appropriate to further scrutinize both the FBI’s initial surveillance and applications and the surveillance that was ultimately conducted for any signs of impropriety. In the meantime, it might behoove the Commander in Chief to refrain from issuing serious and inflammatory accusations based wholly on “intelligence” gleaned from Breitbart News.

If You Value Privacy, Resist Any Form of National ID Cards

The Snowden Effect, Six Years On