The State Board of Education recently held a rule‐​making hearing for Tennessee’s new education savings account program. The goal of one rule, requiring private schools participating in the program to show students’ academic growth, is clear: ensure that private schools are providing high‐​quality educations. One way to do that is to require private schools to administer the state standardized test. The only problem is that the existing evidence suggests this well‐​meaning regulation could have the opposite of its intended effect. Here’s why.

Private schools decide whether to participate in school choice programs each year. Because additional regulations are the primary costs associated with participation, they reduce the quantity of private schools available to families. And because the lower‐​quality private schools are the most strapped for cash, these regulations are more likely to deter the higher‐​quality schools. Two random assignment studies exist on this topic. In the first study, published in Social Science Quarterly, Patrick J. Wolf, Lindsey M. Burke and I used surveys to randomly assign various regulations to private school leaders in Florida and asked them whether they would participate in a hypothetical voucher program the following year.

We found that the state testing mandate reduced the likelihood that private school leaders were certain to participate by 46 percent.

State testing mandates have the opposite of desired effect

Pressuring private schools to focus on state tests also incentivizes “teaching to the test.” But two recent reviews of the evidence suggest that standardized test scores are weak proxies for long‐​term success. A study presented at Harvard University in 2018 concluded that “our meta‐​analysis shows that, at least for school choice programs, there is at best a weak relationship between impacts on test scores and attainment outcomes.” My separate review of the evidence, peer‐​reviewed and published at Educational Review, similarly found several divergences between effects of schools on test scores and longer‐​term outcomes such as crime, safety and earnings. Put differently, pressuring schools to “teach to the test” could actually harm students in the long run.

Proponents of the state testing requirement in Tennessee have good intentions. They want the best for students. But the evidence suggests this particular regulation could have the opposite of its intended effect by reducing the amount of meaningful education options for families.

Setting the Record Straight on School Choice and Voucher Programs 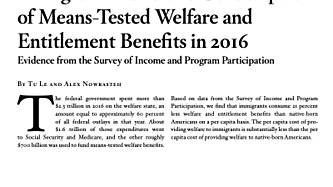