Not that long ago, we had the pleasure of analysing not only the progress the countries of Central and Eastern Europe (CEE) have made toward liberalism [1] with the introduction of liberal public policies and institutions, and flourishing of liberal democracies [2], but also to deliberate a course to structure and implement further reforms towards liberalism in these countries.

The last couple of years however have seen the citizens of several CEE countries witness the erosion of hard-earned liberalism, while privately and publicly weighing on how to prevent populists in power from further trampling citizen's freedoms and rights. Admittedly, in those countries, the persuasion that liberal democracies are stable has been shattered.

To examine what has occurred in CEE, the analysis is divided into two parts: i) political rights and ii) personal and economic freedoms. We shall examine regional and national trends.

Second, the Human Freedom Index [4] reveals that personal and economic freedoms have been under assault globally since 2009, primarily due to the rise of nationalism, populism, and hybrid forms of authoritarianism being sold as viable alternatives (see Figure 2). Accordingly, the global freedom rating has declined from 7.05 to 6.93 on a ten-point scale in a 2008-2015 period, with about half of the countries in the index increasing their ratings and half decreasing. During the same period, freedom in CEE increased from 7.82 to 7.90. 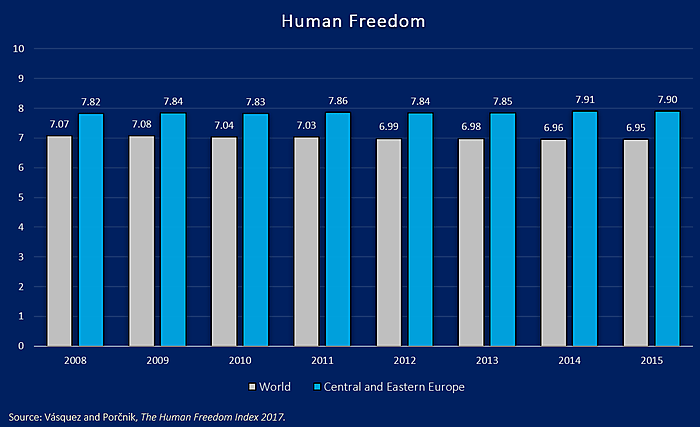 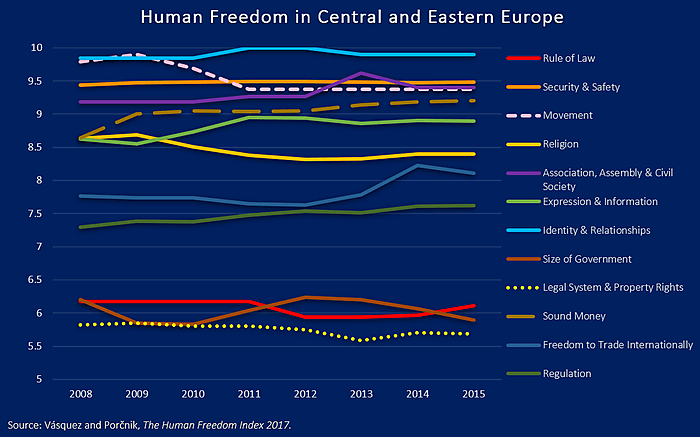 Of 16 CEE countries included in the latest Human Freedom Index, the top three jurisdictions in order were Estonia, Lithuania, and Latvia. At the bottom were Serbia, Bosnia and Herzegovina and Macedonia (see Figure 4). 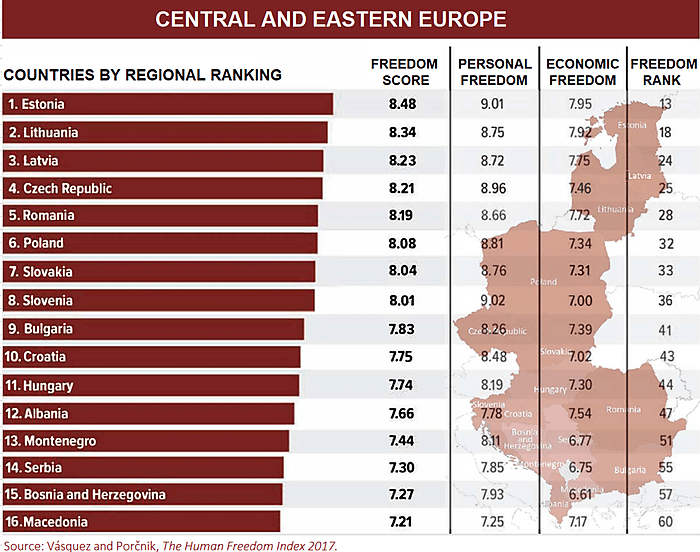 Notably, Figure 5 reveals Poland (-0.10), Hungary (-0.15), and Montenegro (-0.21) losing the most freedom in the last year analysed. While weak rule of law is a common problem in all former socialist economies in the region, in these three countries visible distancing from liberalism by weakening the rule of law and politicisation of the judicial system, alongside attacks on press freedom and freedom of religion, is posing the main threat to overall freedom, as well as creating a high obstacle to future economic growth of these economies and well-being of their citizens. Noteworthy is that with the drop in human freedom observed in the last HFI report, Hungary has for the first time moved from the first quartile of human freedom to the second. Though there is also good news, as some CEE countries—like Macedonia (0.16), Estonia (0.09), and Slovenia (0.08)—have embraced more liberalism in the last year of analysis by increasing personal and/or economic freedom. 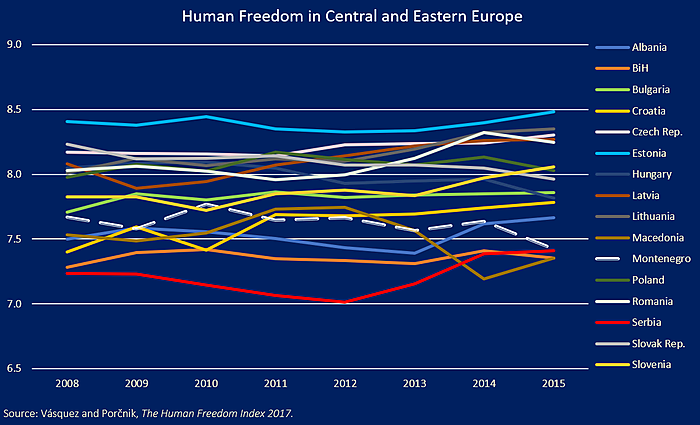 To conclude, as we witness the danger to liberalism manifesting itself in several CEE countries, chiefly in Montenegro, Poland, and Hungary, we observe a flourishing of freedom in Estonia, Latvia, and Lithuania.

[2] A liberal democracy = a political system that is both liberal and democratic, protecting both economic and personal freedoms and political rights.

[3] The EIU's Democracy Index covers five areas, of which here only the first four (electoral process and pluralism, functioning of government, political participation, and political culture) are used to asses political rights.

[4] The annual Human Freedom Index, which is co-published by the Cato Institute in the United States, the Fraser Institute in Canada, and the Liberales Institut at the Friedrich Naumann Foundation for Freedom in Germany, is the broadest measurement of freedom around the world, both in terms of the number of indicators used as well as the number of countries covered. The index uses 79 distinct indicators to capture the degree to which people in 159 countries are free to enjoy rights such as freedom of expression, press, religion, assembly, movement, trade, identity, and relationships, as well as measure the rule of law and security & safety, both being essential conditions of freedom that protect the individual from coercion by others. The most recent HFI report provides data for 2015, the most recent year for which sufficient data was available.