This month Surgeon General Jerome Adams issued an advisory that touted the lifesaving potential of naloxone, an opioid antagonist that reverses potentially fatal overdoses. He called for wider distribution of naloxone to opioid users, their relatives, and their close associates.

While that move is commendable, the surgeon general pulled his punches. He can and should go further by pressing the Food and Drug Administration to reclassify naloxone as an over‐​the‐​counter drug.

Naloxone, approved for use since 1971, works by blocking opioid receptors. It is an effective remedy that can be safely administered by laymen wth minimal training, using either a nasal spray (sold under the brand name Narcan) or an intramuscular auto‐​injector (Evzio).

Adams cites research demonstrating that community‐​based overdose education and naloxone distribution reduce overdose deaths and notes that first responders in most states and cities are now equipped with the drug. According to the U.S. Centers for Disease Control and Prevention, at least 26,500 overdoses were reversed by individuals without medical training between 1996 and 2014.

The FDA should facilitate access to the the opioid‐​overdose antidote.

Since naloxone is available only by prescription, most states have developed work‐​arounds that make obtaining it easier for opioid users and people close to them. That usually involves authorizing pharmacists to prescribe the drug or issuing a “standing order” that lets pharmacists distribute it without a patient‐​specific prescription. The press often reports that such maneuvers make naloxone available “over the counter,” but that’s inaccurate, since pharmacists still serve as middlemen.

Because of the stigma associated with opioids, many users are reluctant to request naloxone from pharmacists, who in any case may be reluctant to prescribe it, believing they are “enabling” drug abusers. In six states and the District of Columbia, naloxone cannot be prescribed to third parties who know an opioid user.

Recognizing these obstacles to naloxone distribution, Australia made it available over the counter in 2016, so it as easy to purchase as cold remedies or antacids. Medical and nonmedical opioid users can discreetly make a purchase and check out at the cash register without having to answer any questions or face scrutiny from a pharmacist. The drug has been sold over the counter in Italy for more than 20 years.

Some argue that wider distribution of naloxone creates a “moral hazard” by providing opioid abusers with a safety net, reducing their incentive to quit or seek treatment. They point to a recent working paper published by the National Bureau of Economic Research (NBER) that found “broadening naloxone access led to more opioid‐​related emergency room visits and more opioid‐​related theft, with no reduction in opioid‐​related mortality.”

A 2017 NBER working paper, by contrast, found wider naloxone availability was associated with a reduction in opioid‐​related deaths of 9 to 11 percent. A study reported last year in the journal Addictive Behavior found that drug consumption generally declined among heroin users after they were trained to use naloxone.

In any case, it is unethical to endanger the lives of some opioid users by impeding access to naloxone in the hope of discouraging others. Public policy should focus on saving the lives of the individuals in distress, regardless of how that may affect other people’s behavior.

Judging from an August 2016 blog post published by the FDA, at least some officials at the agency think it is reasonable to consider reclassifying naloxone as an OTC drug. FDA Deputy Director Karen Mahoney said the agency was ready to assist manufacturers in submitting applications for reclassification. For OTC status, manufacturers must first get approval of labeling and packaging information that can be understood by the general public. The FDA even created a draft label for OTC use to facilitate petitions for rescheduling.

New labeling is arguably unnecessary, since the Narcan nasal spray and the Evzio auto‐​injector were specifically designed for use by the general public and have been used in the field for some time. It is even harder to understand why the FDA is waiting for manufacturers to request reclassification. FDA regulations authorize the agency’s commissioner, Scott Gottlieb, to order a rescheduling review. They also allow petitions from “any interested person,” not just drug manufacturers.

If Gottlieb is unwilling to order a review, the secretary of health and human services—or, if necessary, Congress—can make it happen. Even state legislatures or governors can formally request an FDA review.

The surgeon general’s naloxone advisory makes it obvious that he is an interested party as well. Because he thinks the antidote should be more widely deployed to reduce overdose deaths, Adams should formally ask Gottlieb to order an expedited review with the goal of making naloxone available over the counter as quickly as possible.

Over‐​The‐​Counter Birth Control? Bring It On 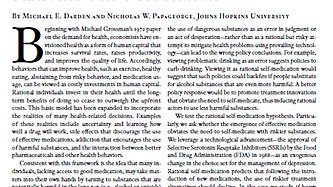 ‘Erectile Pricing’: Why Viagra’s Cost Defies the Laws of Economics