The rupiah is plumbing the depths it last visited in 1998 during the Asian financial crisis. The accompanying chart of the rupiah’s value against the U.S. dollar tells the tale. Although the rupiah’s recent plunge is not as dramatic as the postJuly 1997 float of the rupiah, it is ugly nevertheless. 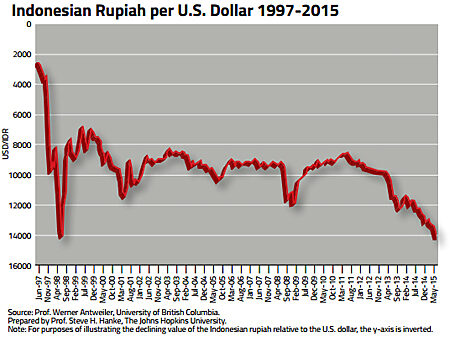 To put the picture into perspective, it is edifying to look at the rupiah's sad history since 1949 (See the accompanying table).

When the Dutch recognized an independent Indonesia in 1949, one rupiah was equal to one Dutch guilder, whose value was 3.8 per U.S. dollar. In December 1965, the rupiah was redenominated at a rate of 1,000 old rupiahs to one new rupiah (today's unit). Since independence, and in terms of the original rupiah, there has been a depreciation in the exchange rate from 3.8 per dollar to approximately fourteen million per dollar. That amounts to a depreciation against the dollar of almost 3.7 million times. With those kinds of numbers, it's not surprising that the rupiah has been one of the worst performing currencies in Asia over the past 50 years.

Although the rupiah’s recent plunge is not as dramatic as the post‐​July 1997 float of the rupiah, it is ugly nevertheless.

In an attempt to stop the rupiah's fall, Jakarta's plunge protection team has swung into action with a wrongheaded law that would ban the use of foreign currencies for local transactions. No more price quotes for hotel rooms in U.S. dollars. The same will be the case for office units in Jakarta, which have been primarily paid for in U.S. dollars. This is yet another case in which President Joko Widodo claims he wants to do the “right thing,” but reaches for the wrong policy lever.

Instead of banning the use of foreign currencies, Indonesia should encourage currency competition, rather than trying to protect the Bank of Indonesia (BI). Indeed, what the BI needs is a good dose of competition and the ensuing monetary discipline. After all, if there was a real competitive currency regime in which Indonesians were free to use any currency they wished, they could (and would) switch out of the rupiah into a foreign currency, when the BI misbehaves. Currency competition would do wonders for Indonesia by disciplining the BI and encouraging sound monetary policies, which would result in a stable rupiah.

Peru offers an example of a successful competitive currency regime. In fact, Peru has a parallel currency system. For a decade and a half Peruvians have been allowed to hold and use two currencies: either the Peruvian sol or the U.S. dollar. Peruvians are free to buy and sell, to deposit and lend, to save and invest, at home and abroad, in either currency. The exchange rate between the sol and the greenback is freely floating and there are no restrictions on convertibility. This system puts a harsh discipline on the Central Reserve Bank of Peru. In consequence, the central bank performs. Over the past decade the annual inflation rate in sols has averaged 2.5% and Peru's annual real growth rate has averaged 6.5%.

However, the rupiah isn't the only economic problem facing President Jokowi. Indonesia is in need of major economic reforms to boost competition in the real economy, to remove red tape, to reduce corruption, and to enhance growth. Let's look at the metrics. Yes. Metrics which serve as proxies for economic freedom have been developed and are widely used. For example, The Heritage Foundation and The Wall Street Journal jointly publish an annual volume, The Index of Economic Freedom, which now incorporates 178 countries. The Economic Freedom of the World, which includes 157 countries, is published jointly by the Fraser Institute and the Cato Institute. And the World Bank issues an annual, Doing Business Report, which deals with the ease of doing business in 189 countries. Data from these annuals on economic freedom show that there is a strong positive linkage between measures of economic freedom and economic growth.

To improve a country's economic freedom score, and thus ratchet up its economic growth rate, governments must make credible commitments to implement liberal economic reform programs. A commitment is made more credible the more one binds oneself to the achievement of an objective. At the extreme, when a commander on the battlefield orders his troops to burn all bridges behind them to cut off all avenues of retreat, his enemies will be confident that his intentions are to fight to the last man.

A credible commitment is something that many politicians are reluctant to entertain. That said, there have been numerous cases in which politicians have made credible commitments to adopt liberal economic policies. These have resulted in dramatic increases in economic freedom and prosperity, regardless of the type of political regime or stripe of the political party that embraced reforms.

Singapore, for example, gained its independence in 1965 when it was expelled from a two-year federation with Malaysia. At that time, Singapore was backward and poor — a barren speck on the map in a dangerous part of the world. Its population was made up of a diverse group of immigrants with a history of communal tensions. However, Singapore had a leader with clear ideas on how to modernize the country

Lee Kuan Yew ruled out passing the begging bowl and accepting foreign assistance of any kind. Instead, he embraced stable money and first-world competition. Stable money was initially achieved with a currency board. Competition was attained by light taxation, minimal regulation of business and free trade. In addition, Lee Kuan Yew insisted on personal security, public order and the protection of private property. To accomplish his objectives, his central principle for organizing a “small” government was to run a tight ship with no waste or corruption. To implement that principle, he appointed only first-class civil servants and paid them first-class wages.

Today, Singapore is one of the freest, most flexible and prosperous economies in the world. Hong Kong too, along with Singapore, ranks as one of the world's freest economies. When we move down — way down — on the economic freedom rankings, we find Indonesia.

The accompanying table shows the rankings by the three economic freedom metrics for the year 2000 and the most recent year reported. What is striking about Indonesia is not only its low ranking, indicating the need for reform, but the fact that there hasn't been noticeable improvement since 2000.

To enhance economic freedom, Indonesia has its work cut out. It will not only have to deliver on President Joko Widodo's recently proposed plan to simplify or remove 89 regulations that hinder business, but it will have to do something big and visionary — like Lee Kuan Yew did in Singapore. Something that would lift Indonesia's respectable growth rates, stabilize the plunging rupiah and reduce its crippling inflation (see the accompanying tables).

Chris Collins Is in Big Trouble, Despite the Murkiness of Insider Trading Laws