National School Choice Week celebrates the idea that educational freedom itself is a benefit to families. But liberty is not the only argument supporting programs that increase educational options for children. The scientific evidence is also heavily in favor of private school choice.

Nineteen out of 21 experimental evaluations find that private school choice programs lead to student achievement levels that are on par with or higher than they would have been in government schools.

The Cato Policy Analysis that I just released — The Public Benefit of Private Schooling: Test Scores Rise When There Is More of It — provides more causal scientific evidence supporting the expansion of private school choice policies.

In the study, I examine how fluctuations in the private share of schooling within 52 countries from 2000 to 2012 influence Programme for International Student Assessment scores while controlling for any country-level changes in factors such as GDP, population, schooling enrollment, and government expenditures. As shown in figure 2 from the analysis, the preferred model indicates that a 1-percentage point increase in the private share of schooling enrollment within a country increases student math achievement by 1.4 points and reading achievement by 1 point. 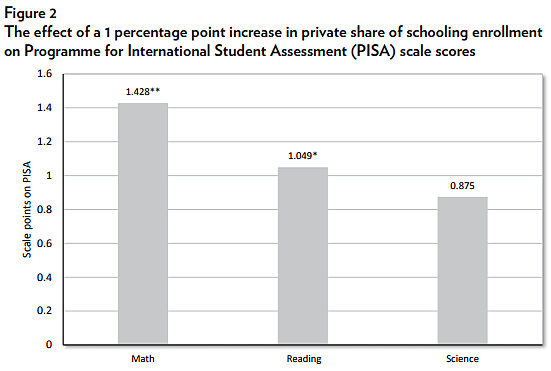 The detected effects are moderate in size, but they could lead to substantial long-term benefits for students and the rest of society. According to these results, combined with research by Stanford economist Eric Hanushek and assuming a constant return to education, a 1-percentage point increase in the share of students enrolled in private schools would result in about a 1.3 percent gain in lifetime earnings for the average student in a given nation, or about $15,000 per student in the United States.

This report, alongside the existing robust scientific evidence of improved short- and long-term outcomes for students and societies, further indicates that decision-makers ought to increase access to private school choice around the world. In order to do so, I recommend enacting a privately funded and universally accessible Education Savings Account at the state level.

In other words, make every week school choice week.