In the New York Times on Tuesday, Senator Josh Hawley (R-MO) proposed abolishing the World Trade Organization. On Wednesday came a flood of fact corrections from trade experts exposing the senator’s idea as the spawn of fallacies. Then, on Thursday, conceding only that the United States can’t “abolish” the WTO, Hawley submitted a joint resolution to Congress calling for a formal withdrawal.

The march of time has greatly transformed global trade. COVID-19 has made the digital space part of our daily lives. However, the digital economy faces challenges as governments grapple with how to manage it. This panel will discuss obstacles and opportunities for digital trade: Is there a possibility for multilateral or plurilateral consensus on new rules? What do we stand to lose if consensus on a baseline set of rules cannot be achieved? Join us for a deep dive into this timely issue.

Withdrawing from the WTO would be a monumental mistake. But that doesn’t mean we shouldn’t have a robust debate on the matter. In a press release announcing the resolution yesterday, Senator Hawley gave his opening statement:

“The coronavirus pandemic has exposed deep, long‐​standing flaws in our global economic system that demand reform. International organizations like the W.T.O. have enabled the rise of China and benefitted elites around the globe while hollowing out American industry, from small towns to once‐​thriving urban centers. We need to return production to America, secure critical supply chains, and encourage domestic innovation. Pulling out of the W.T.O. is a good first step.”

Withdrawing from the WTO would be a monumental mistake. But that doesn’t mean we shouldn’t have a robust debate on the matter.

It’s a mystery how WTO withdrawal would resolve any of the alleged problems Hawley mentions or facilitate implementation of his prescriptions. But he does scratch the surface of some valid points.

Indeed, the WTO isn’t perfect. It is flawed in several respects. It is an institution built on post‐​war economic and geopolitical realities, which have changed considerably over the past couple of decades. Those changes have made the WTO’s mission—to facilitate global trade liberalization by encouraging its members to establish rules and to abide by those rules—more difficult.

When the United States accounted for a larger share of global GDP and before it began to tire of its global leadership role, the rules of the trading system were shaped largely by U.S. input. Today, those rules remain at the heart of the WTO. But in an organization that responds to the consensus of its members, it is difficult to establish new rules when a growing number of its 164 members have become weighty enough to insist on their own demands, while resisting those of others.

There has been very little multilateral trade liberalization since the WTO’s creation in 1995. As a result, large and important swaths of the global economy—most services trade, digital trade, many of the market distortions caused by state‐​owned enterprises, for example—remain outside WTO rules. Meanwhile, the existing rules haven’t helped discipline some of China’s egregious mercantilism. That’s not to say the rules don’t exist, but that the United States has been reluctant to use them more aggressively, opting instead for the vigilantism of unilateral trade wars.

When Hawley says the WTO enabled China’s rise, he’s not wrong. China’s long march to join the WTO required it to deliver massive economic reforms. When Beijing demonstrated that it was serious about reforms and that the Chinese economy and some of its government’s practices would become subject to the rules of the global trading system, the rest of the world responded by investing in China and cultivating deeper economic ties. That legitimacy contributed importantly to the development of China. But that was the plan, and it succeeded.

That conferred legitimacy, presumably, is how Hawley stretches to connect the WTO and the demise of industries across America’s cities and towns. Certainly, trade contributed to U.S. job churn. Jobs were lost, but many more were created. To pin blame on the WTO for the share of job losses attributable to imports from China two decades ago because it presided over implementation of the rules created largely at U.S. behest lacks all credibility.

Likewise, the pandemic may have exposed vulnerabilities in supply chains that are insufficiently diversified. But the WTO didn’t force any business to put all its eggs in one basket. The WTO facilitated the reduction of administrative barriers to trade, which—in conjunction with revolutionary innovations in transportation and communications—rendered the diversification of production along cross‐​border supply chains plausible and, for some businesses in some industries, optimal.

Trade liberalization helped make global supply chains possible, but the WTO didn’t force anyone to do anything. Moreover, the WTO is in no way preventing companies from repatriating, decoupling, or otherwise diversifying some or all their supply chains.

Hawley is scapegoating the WTO for whatever he believes is ailing America. His suggestion that “pulling out of the W.T.O. is a good first step” to remedying those ills ignores the massive costs that that action would impose on U.S. businesses, consumers, investors, and workers.

WTO rules provide reasonable assurances that U.S. exporters have access to foreign market on conditions no less favorable than those granted exporters from other countries. Unilaterally eschewing those benefits would subject U.S. companies to higher tariffs and greater uncertainty. Many other costs—including those associated with abdicated leadership—can be tallied, but the cost of the discrimination exporters would face in foreign markets alone would negate any short‐​term benefits Hawley can possibly expect to gain.

The question of WTO withdrawal was put to votes in the House of Representatives in 2005 and 2010. Both times the measure was defeated overwhelmingly. The Senate has never voted on the question. Given the rise in nationalist sentiment and the recent tendency of Republican leadership to stare at its shoes as the president erects trade barriers, a debate on the Senate floor would be illuminating. The debate we deserve would produce a consensus not for WTO withdrawal, but for WTO reform. 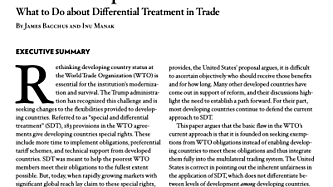 Hawley Is Wrong About a WTO Withdrawal

The Fate of the WTO and Global Trade Hangs on Fish