As illustrated by this chart, economists are lousy forecasters. 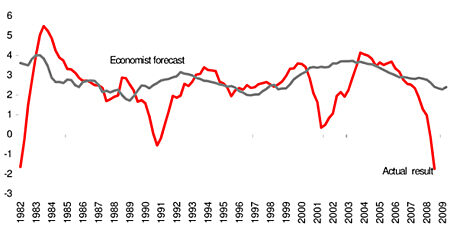 To be more specific, economists are no better than fortune tellers when trying to make short-run macroeconomic forecasts. Heck, if we actually knew what was going to happen over the next 12 months, we'd all be billionaires.

But we can (on occasion) make sensible predictions about the long-run impact of various government policies. All other things being equal, for instance, it's safe to say that countries with bigger governments will grow slower than nations that don't divert as many resources from the private sector. Even the World Bank and European Central Bank agree with that common-sense proposition.

Another can't-fail prediction is that bailouts will reward bad behavior and lead to dependency. That's why I'm not at all surprised by the news that Greece will get another bailout.

Indeed, if there was a least‐​surprising‐​headline contest, it would go to the EU Observer for this headline.

A third bailout? You mean the first two didn’t work? I’m shocked! Which is why we need to change to a least‐​surprising‐​headlines contest,

because we also have this headline from City AM.

And this one from the UK‐​based Times. Which they may want to save for when it’s time for the fourth bailout.

And the fifth bailout. And…well, you get the idea.

Yet these people apparently don’t care about moral hazard, so we see this headline from the Telegraph.

Last but not least, here’s what the BBC wrote.

Given all these headlines from today, you can see why I felt safe in predicting a couple of days ago for Canadian TV that Europe was still in bad shape. Simply stated, government is far too big and costs far too much. Dan Mitchell Explaining Why Europe Needs Reagan‐​Thatcher Reforms to Restore Growth

With that kind of contest, there are no winners other than politicians.

P.S. The ostensible purpose of the interview was to discuss Europe’s supposed recovery. I explained a few days ago why nobody should be impressed by the anemic growth on the other side of the Atlantic. But I think any changes in short‐​run economic performance — for better or worse — are far less important than the long‐​run projections of expanding government and growing dependency in Europe.

P.P.S. Americans shouldn’t feel cocky or superior. Long‐​run projections from the BIS, OECD, and IMF all show that the United States will be in deep trouble if we don’t engage in genuine entitlement reform.

P.P.P.S. Since I was talking to a Canadian audience, I mentioned that Europe should copy the spending restraint Canada enjoyed in the 1990s. You can click here to learn more about happened north of the border (and why the United States also should copy the same policy).

If Britain Is to Succeed Post‐​Brexit, It Must Be Open to Creative Destruction

How Lithuania Destroyed the Soviet Union

The Ides of June: Kerensky’s War Allowed Bolsheviks to Triumph in Russia