The study, “Are Nongroup Marketplace Premiums Really High? Not in Comparison with Employer Insurance,” compares premiums for the second‐​lowest‐​cost silver plans in the Exchanges to premiums for employer‐​sponsored insurance. The authors adjust premiums for Exchange plans upward by 24 percent to account for the facts that these Exchange plans are less comprehensive (i.e., have lower actuarial values) than employer plans, and that more‐​comprehensive employer coverage tends to lead enrollees to consume more care. The purpose of adjusting Exchange premiums is so “we can compare them, apples to apples, with employer‐​based insurance.” After making those adjustments, the authors find:

In the remaining 12 states (the study includes the District of Columbia), Exchange premiums are as much as 68 percent higher (Alaska) than employer‐​sponsored insurance premiums. Results for 30 metropolitan areas were similar. “Thus, with few exceptions,” the authors conclude, “the level and growth of [Exchange premiums] should not be interpreted as evidence that these new markets are weak.” Exchange coverage, “when adjusted to make its premiums comparable to employer premiums, is much more often than not lower cost than the average coverage offered through employers.”

There ain’t no such thing as a free lunch.

That finding sits uncomfortably with the actual per-enrollee spending in Exchange plans. S&P Global reports that in 2015, individual-market enrollees cost more to cover than employer-plan enrollees. The below graph illustrates the trends in per-member-per-month (PMPM) spending by commercial insurers. Notice how per-enrollee spending surged in the individual market as ObamaCare took full effect in 2014. Prior to the ACA, individual-market enrollees cost maybe one-third less to insure than employer-plan enrollees. In 2015, they cost 8.14 percent more.

(Note that spending per Exchange enrollee dipped below spending per employer-plan enrollee in January 2016, as it did in January 2015 before then surging to record highs. It remains to be seen whether this dip is permanent, or like the previous dip is the result of a “January effect” where per-enrollee spending falls right after open enrollment and then rises throughout the year as healthy enrollees drop out of the Exchanges and sicker consumers use special-enrollment periods to obtain coverage. Vertical lines denote January.) 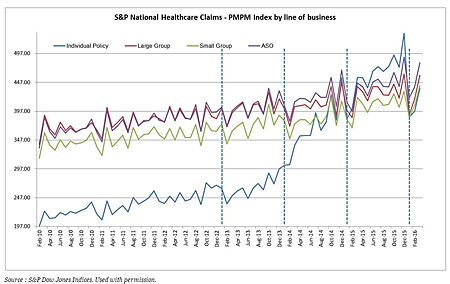 We are left with a paradox. If Exchange enrollees cost as much or more to insure, how can Exchange premiums be lower? The answer is, they aren’t. Exchange premiums are higher than comparable employer-plan premiums. The authors of the Urban study failed to account for the full premiums for Exchange plans.

The study’s authors used the premiums that HealthCare.gov and state-run Exchange web sites quote prospective enrollees. Yet those quotes do not reflect the full premium for Exchange plans.

For example, taxpayers finance a large portion of Exchange-plan premiums through the ACA’s “reinsurance” program. The reinsurance program taxes almost all health plans, including most employer-sponsored plans, and uses the revenue to subsidize Exchange plans. The reinsurance program shifts a large part of the premiums for ObamaCare plans to people in non-ObamaCare plans. A study by the Mercatus Center found that in 2014, “net reinsurance payments paid by government to insurers selling individual market QHPs totaled about 20.4% of gross premiums.” That means that in 2014, the actual cost of Exchange plans—the full premium—was at least 20.4 percent higher than the stated premium. If net reinsurance payments to Exchange plans in 2016 are just 8 percent of gross premiums, the authors of the Urban study would have to adjust Exchange plan premiums upward not by 24 percent, but by 34 percent (1.24 * 1.08 ≈ 1.34). Applying just this one hidden part of Exchange premiums to the Urban Institute’s results shrinks the Exchange plan’s supposed nationwide premium advantage from 10 percent to 3 percent. But wait, there’s more.

Exchange-participating carriers have suffered losses, even after accounting for net reinsurance subsidies. So the full premium for Exchange coverage is higher still–and the insurers are paying part of it. In 2014, carriers suffered unreimbursed losses of $2.5 billion. We don’t have data yet, but the government has indicated carriers again suffered large unreimbursed losses in 2015. The Mercatus Center’s Brian Blase, a former congressional oversight investigator, estimates that even after accounting for net reinsurance subsidies, Exchange plans lost an average $1,000 per enrollee in 2015. If losses are similar in 2016, then the average Exchange-plan premium would actually be 13 percent higher than the average employer-plan premium. In Alaska, the average Exchange-plan premium would be 93 percent higher.  These figures are totally speculative, I admit. The only thing they have going for them is that they are more accurate than the Urban Institute’s.

So far as I can tell, the Urban study does not appear to account for the impact of cost-sharing subsidies. The ACA offers subsidies that cover much of the cost-sharing for silver-plan enrollees with household incomes between 100 percent and 250 percent of the federal poverty level. Cost-sharing subsidies increase the actuarial value of silver plans by amounts that vary with household income. But they do not alter the portion of the premiums that Exchange web sites show consumers. The Urban study therefore does not adjust silver-plan premiums to account for this portion of the full premium, or for the higher actuarial values, or for the resulting moral hazard. Nor does it adjust for the narrower networks found in Exchange plans.

The Urban Institute study instead engages in what my Cato Institute colleague Arnold Kling calls a game of “hide the premium.” As ACA architect Jonathan Gruber explained, “This bill was written in a tortured way” to create a “lack of transparency” because “if…you made explicit that healthy people pay in and sick people get money, it would not have passed.” When it did pass, it was due to what Gruber called the “huge political advantage” that comes from hiding how much voters are paying, as well as ”the stupidity of the American voter.”

That lack of transparency has allowed supporters to claim the ACA is providing coverage to millions who are so sick that insurance companies previously wouldn’t cover them, while simultaneously claiming Exchange coverage is no more expensive than individual-market coverage prior to the ACA or than employer-sponsored coverage. When we incorporate the full premium for Exchange plans, the smoke clears and we see Exchange coverage is indeed more expensive than employer-sponsored coverage. There ain’t no such thing as a free lunch.

If you think this is fun, just imagine the shell games we could play with a public option.