Colombia’s peso is in trouble, again. Against the U.S. dollar, the peso has shed 20% of its value in a little more than a year and 7% in the last month. Like most Latin American currencies, the Colombian peso bobs up and down like a yo‐​yo, and its long‐​term trend is one of weakness. Indeed, since August 2014, the peso has lost 45% of its value against the greenback. Talk about a theft! The chart below tells the peso’s most recent tale. 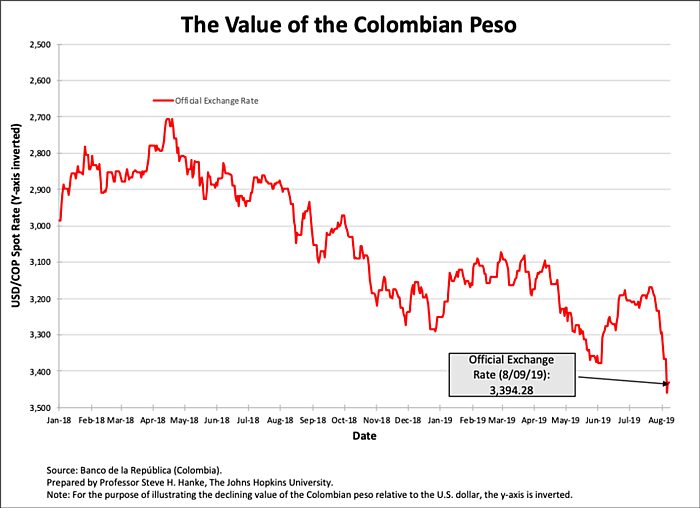 So, in addition to being a destructive destabilizer, the peso is a long-term loser. That is why Colombians prefer greenbacks. Maybe it’s time for the government to officially dump the peso and give Colombians what they prefer: the U.S. dollar.

The dollar has been the official coin of the realm in Panama for over a century. It wasn’t until early 2001 that Colombia’s neighbor, Ecuador, became the next Latin American country to officially adopt the dollar. Shortly thereafter (also in 2001), El Salvador dumped the colón and replaced it with the dollar.

To illustrate the important features of dollarization, let’s take a look at Panama, the granddaddy of Latin American dollarizations. Panama officially adopted the dollar in 1903, and with that, it became part of the dollar bloc. Consequently, the exchange rate risks and the possibility of currency crises vis-à-vis the U.S. dollar disappeared. In addition, the possibility of banking crises is largely mitigated because Panama’s banking system is integrated into the international financial system. The nature of the banks that hold general licenses provides the key to understanding how the system as a whole functions smoothly. When these banks’ portfolios are in equilibrium, they are indifferent at the margin between deploying their liquidity (creating or withdrawing credit) in the domestic market or internationally. As the liquidity (credit-creating potential) in these banks changes, they evaluate risk-adjusted rates of return in the domestic and international markets and adjust their portfolios accordingly. Excess liquidity is deployed domestically if domestic risk-adjusted returns exceed those in the international market and internationally if the international risk adjusted returns exceed those in the domestic market. This process is thrown into reverse when liquidity deficits arise.

The adjustment of banks’ portfolios is the mechanism that allows for a smooth flow of liquidity (and credit) into and out of the banking system (and the economy). In short, excesses or deficits of liquidity in the system are rapidly eliminated because banks are indifferent as to whether they deploy their liquidity in the domestic or international markets. Panama can be seen as a small pond connected by its banking system to a huge international ocean of liquidity. Among other things, this renders the traditional lender-of-last-resort function performed by central banks unnecessary. When risk-adjusted rates of return in Panama exceed those overseas, Panama draws from the international ocean of liquidity, and when the returns overseas exceed those in Panama, Panama adds liquidity (credit) to the ocean abroad. To continue the analogy, Panama’s banking system acts like the Panama Canal to keep the water levels in two bodies of water in equilibrium. Not surprisingly, with this high degree of financial integration, there is virtually no correlation between the level of credit extended to Panamanians and the deposits in Panama. The results of Panama’s dollarized money system and internationally integrated banking system have been excellent when compared with other emerging market countries.

The chart below shows the normalized values for nominal GDP in terms of U.S. dollars between 2001 (index value = 100) and 2018 for six Latin American countries. Three — Panama, Ecuador, and El Salvador — are officially dollarized, while Peru has a dual currency system (read: both the Peruvian sol and USD are legal tender). In the three officially dollarized countries, GDP growth in terms of U.S. dollars has been more stable than growth in the countries that issue their own domestic currencies. Peru, with its dual currency system, displays less stability than the fully dollarized countries, but has relatively strong growth. When it comes to Colombia, its growth rate is highly variable and modest. Indeed, thanks to the plunge in the peso after 2013, Colombia’s GDP has, well, plunged. 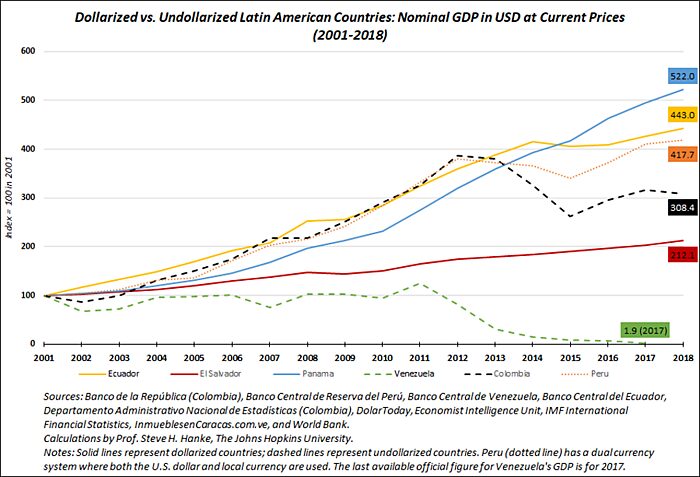 When we look at inflation, central banks in all of Latin America are big losers compared to the U.S. Federal Reserve (read: dollarized systems). Inflation rates over the decades for Colombia and Panama tell that stunning story (see the chart below). 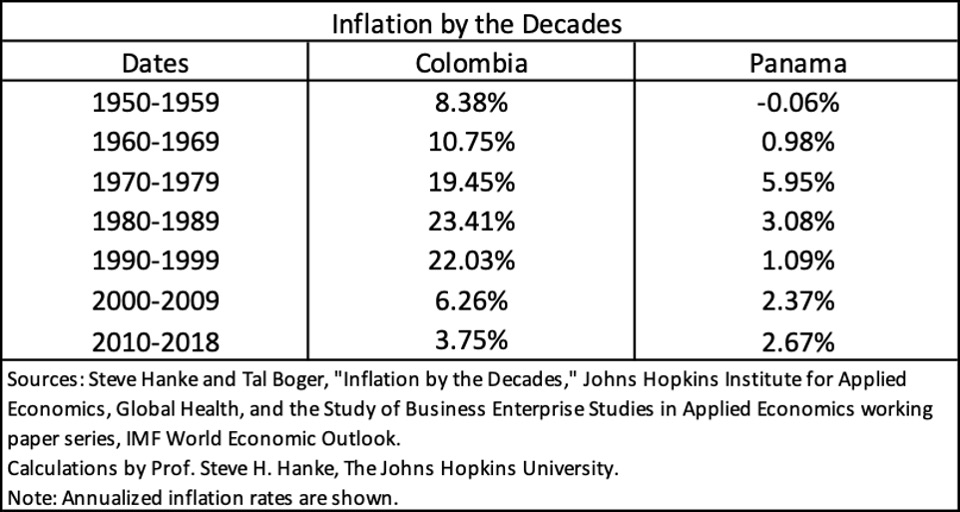 It’s time for the Colombian government to embrace the same conclusion as did the late-great MIT economist, Rudi Dornbusch: official dollarization is a “no-brainer.”