President Recep Tayyip Erdogan likes to swagger and attempt to punch above his weight. While his rhetorical threats and theatrics keep many allies and enemies off balance, they do not fool the Turks. Most of their bank deposits are not denominated in lira, but foreign currencies. Indeed, as shown in the chart below, these deposits account for around 70% of the total deposits in Turkey’s banking system. That’s because the Turks have been burned many times over the decades by lira devaluations. They know the lira is a junk currency that is best deposited in a waste basket, not a bank. 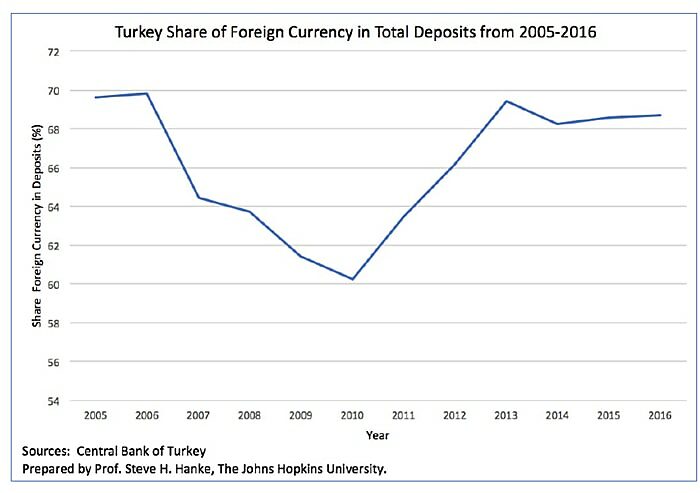 Turkey Share of Foreign Currency in Total Deposits from 2005-2016

The lira’s recent plunge to record lows, triggered by Erdogan’s actions and reactions, exposes Turkey’s Achilles’ heel (see chart below). No country with a volatile and inherently weak currency has ever projected and exercised real power. The lira will eventually bring the Turkish economy and Erdogan down to earth. 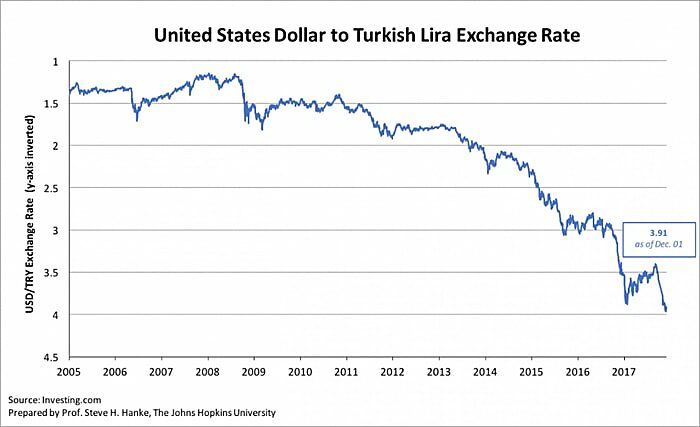 And, this may occur sooner than the president thinks. The quality of the lira has been dramatically deteriorating since 2008. The net foreign reserves on the Central Bank of Turkey’s balance sheet have plunged since the summer of 2009 from over 100% of reserve money into negative territory. To keep the money supply growing, the Central Bank has replaced its disappearing foreign assets with those denominated in lira. That ugly picture is shown below. 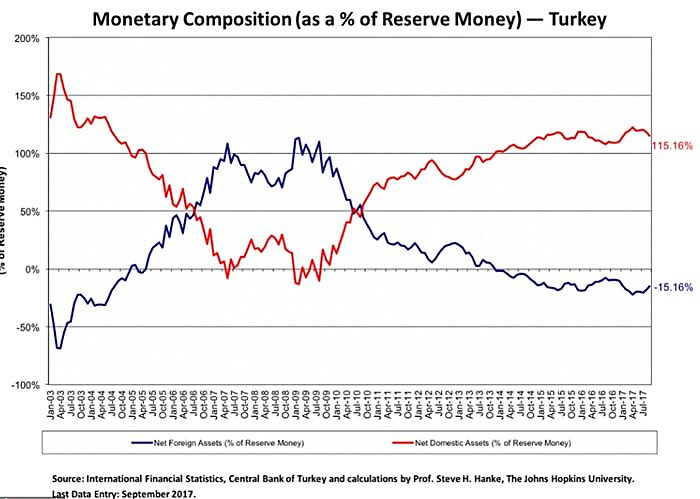 Monetary Composition (as a % of Reserve Money) - Turkey

If President Erdogan wants to remove Turkey’s Achilles’ heel and start wielding real power, he has to do something about Turkey’s junk currency.

There is a solution — an elegant solution. Turkey should go for gold, a “currency” that is not issued or controlled by a sovereign. Turkey could do this by adopting a gold-lira.

Until early in the 20th century, gold played a central role in the world of money. Gold had an incredible run — almost three thousand years. And why not? After all, Professor Roy Jastram convincingly documents in The Golden Constant just how gold maintains its purchasing power over long periods of time.

But, since President Richard Nixon closed the gold window in August 1971, gold has not played a formal role in the international monetary regime. Today, the “regime” is characterized by many as a chaotic non-system.

Since the closure of the gold window, there have been noises in some quarters that gold’s formal role should be re-established in the sphere of international money. In 1997, Nobelist Robert Mundell went so far as to predict that “Gold will be part of the structure of the international monetary system in the twenty-first century.”

One foolproof way to transform Professor Mundell’s prediction into a reality is via gold-based currency boards. Currency boards have existed in more than 70 countries, and a number are in operation today. Countries with such monetary institutions have experienced more fiscal discipline, superior price stability, and higher growth rates than comparable countries with central banks.

The lira will eventually bring the Turkish economy and Erdogan down to earth.

A Republic of Turkey Gold‐​Based Currency Board Draft Law

1. The Currency Board of the Republic of Turkey (“the Board”) is hereby created. The purpose of the Board is to issue notes and coins denominated in a gold currency unit, and to hold foreign reserves sufficient to maintain them fully convertible at a fixed exchange rate into gold.

2. The Board shall have its legal seat in Switzerland and shall be subject to the laws of Switzerland.

3. The notes and coins issued by the Board shall be fully convertible into gold on demand. The Board shall charge no commission for exchanging its currency into, or out of, gold. The notes shall be printed outside the Republic of Turkey.

4a. The Board may not increase its monetary liabilities without gold or foreign reserves equal to 100% of the amount of the increase.

4b. The Board shall hold its reserves in gold or in highly rated and liquid securities either denominated in gold or fully hedged against changes in the fiat‐​currency price of gold. These reserves shall be on deposit at the Bank for International Settlements or at an internationally certified gold warehouse.

5. The Board shall remit to the Government of the Republic of Turkey all net seigniorage beyond what is necessary to maintain 110% of foreign reserves.

6. The Board may not perform banking services for the Government of the Republic of Turkey, and it shall not be responsible for the financial obligations of the Government.

7. Failure to maintain the fixed exchange rate with gold shall make the Board and its directors subject to legal action for breach of contract according to the laws of Switzerland. This provision does not apply to attempts to redeem embezzled, mutilated, or counterfeit notes, coins, and deposits.

8. Existing laws that conflict with this law are void.

9. This law takes effect immediately upon its publication.