The Investing in a New Vision for the Environment and Surface Transportation (INVEST) in America Act passed by the House of Representatives last week is a transportation bill for the ‘20s — the 1920s, that is. The bill, which has yet to be considered by the Senate, would massively increase spending on obsolete forms of transportation that are irrelevant to most Americans.

The bill would quintuple federal subsidies to Amtrak and intercity passenger trains to nearly $10 billion a year. I love passenger trains more than most people, but unlike some I don’t think other taxpayers should be forced to subsidize my hobby.

The bill would further increase federal subsidies to urban transit by 50 percent, to $21 billion a year, much of which would go for rail transit. It would also increase federal spending on highways, but with a poison pill: states will not be allowed to expand their highway systems until they get all of their existing roads and bridges in a state of good repair. While that sounds sensible, no similar requirement is applied to Amtrak or urban transit even though Amtrak has a $52 billion maintenance backlog in the Boston‐​to‐​Washington corridor and transit agencies have a $100 billion backlog (in today’s dollars), mostly for rail transit.

The bill would massively increase spending on obsolete forms of transportation that are irrelevant to most Americans.

The state highway backlog is actually small as most bridges and roads that need maintenance are locally‐​owned (and even that is declining). But the fix‐​it‐​first requirement would impose needless red‐​tape on the states and could prevent necessary expansions in fast‐​growing regions.

The president of the Great Northern Railway, Ralph Budd, realized that buses were more economical than trains in short‐​haul service. In 1925, he bought a small bus company called Northland Transportation and gave it millions of dollars to expand. The company soon changed its name to Greyhound. A few years later, when Budd was president of the Chicago, Burlington & Quincy, he helped start Trailways.

In 1949, Budd was made chairman of the board of the Chicago Transit Authority, which was trying to operate streetcars and elevated trains without taxpayer subsidies. Budd quickly figured out that buses were more economical than streetcars and scrapped all of CTA’s streetcar lines, and even some of its elevated lines, and replaced them with Twin Coach buses.

In 2018, according to the Department of Transportation, urban transit carried 1.0 percent of all surface (that is, non‐​air) passenger travel in the United States, of which 0.6 percent was rail transit. Amtrak carried 0.1 percent. Even in the Boston‐​to‐​Washington corridor, Amtrak carried only about 6 percent of intercity travel.

Cars and light trucks, meanwhile, moved well over 90 percent of passenger travel, with the remainder divided among non‐​transit buses and motorcycles. Highways also moved close to 40 percent of freight ton‐​miles.

Despite transit’s and Amtrak’s insignificance, the House bill would give 22 percent of federal funds to transit and 12 percent to intercity passenger trains. This is futile: since 1970, the nation’s taxpayers have spent more than $1.5 trillion propping up intercity passenger trains and urban rail transit, yet per capita ridership of both has declined by about a third.

Proponents say the government should emphasize these outmoded forms of travel because they are supposedly more energy efficient and climate‐​friendly. Yet transit uses more energy, per passenger mile, than the average car in all but 4 out of more than 400 urban areas with transit systems, and it emits more greenhouse gases than the average car in all but eight of those urban areas. Amtrak is also inefficient outside the Boston‐​to‐​Washington corridor.

In the few places where transit and Amtrak are greener than driving, it is usually because they use electrical energy in states that rely heavily on by nuclear or hydroelectric power plants. Driving an electric car would do just as well.

The INVEST Act was designed for a century ago. It’s time to let go of the past and write a bill for the future.

Congestion Kills, so Why Are Politicians Making It Worse? 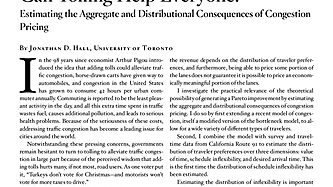