Dr. Karl Schiller, West Germany’s Economics Minister between 1966 and 1972, pithily pronounced that: “Stability is not everything, but without stability, everything is nothing.” I agree. In the economic sphere, instability is usually a “bad”, not a “good”. The world’s great destabilizer is the United States. How could this be? In the post‐​World War II era, the world has been on a U.S. dollar standard. Accordingly, the U.S. Federal Reserve is the de facto central banker for the world. But you would never know it by looking at the statements and actions of the Fed. Indeed, the world’s central bank functions, for the most part, as if it were operating in a closed economy — one in which the rest of the world doesn’t exist. The Fed’s disregard for the rest of the world results in policies that send huge hot money flows to and fro. These flows create an enormous amount of instability — a “bad”, not a “good”.

Prof. Ronald McKinnon captured this picture in his most recent edifying book: The Unloved Dollar Standard: From Bretton Woods to the Rise of China (Oxford University Press, 2012). In addition to identifying the U.S. as the great destabilizer in the international monetary system, Prof.

The world’s great destabilizer is the United States. How could this be?

McKinnon shows why China has been a major stabilizing force. China has injected stability into the international sphere by smartly, and ironically, linking the Chinese yuan (more or less tightly) to the U.S. dollar since 1995. China has coupled this yuan-dollar currency link with a successful counter cyclical financial policy. Whenever there has been a potential bump in the road (read: slowdown), China has expanded bank money and the economy has sailed over the bumps. In consequence, since 1995, the annual rate of real GDP growth in China has ranged from a low of 7.6% (1999) to a high of 14.2% (2007) — the greatest boom in world history.

We have recently witnessed a changing of the guard at the Fed. Prof. Janet Yellen has just taken over the reins from Prof. Ben Bernanke. Will policies change? In her initial testimony before the U.S. Congress, Prof. Yellen went out of her way to indicate that she was going to follow in the footsteps of her predecessor. Like Prof. Bernanke, the unspoken Fed mantra will be a closed economy. No doubt, Prof. Yellen will not change Bernanke's dashboard to include what is arguably the most important price in the world: the USD/EUR exchange rate (or any other exchange rate for that matter).

Yes, the Fed will stay lashed to a totally unrealistic (read: wrong) closed economy model. And, yes, the Fed will continue to ignore the obvious: that by manipulating interest rates, it fuels great hot money flows which create boom-bust cycles throughout the world.

If that wasn't bad enough, it appears that Prof. Yellen will tighten the regulatory vise on the banking system even more tightly than Prof. Bernanke did. Prof. Yellen has indicated that she favors higher risk-based capital ratios, higher leveraged-based capital ratios and higher liquidity ratios for banks. In short, she embraces regulatory changes that will force banks to continue to deleverage.

Since about 80% of the nation's money supply (M4) is produced by banks, this means that the money supply will remain tight. Recall that the Divisia M4 measure of money, which is computed by the Center for Financial Stability, is only growing at a paltry year over year rate of 2.0% (December 2013). Such a tight monetary stance in the face of economic weakness amounts to a wrongheaded procyclical approach.

Prof. Yellen's monetary stance is not only wrongheaded but schizophrenic. When it comes to the big elephant in the room — bank money — she is very tight. But, when it comes to state money, she is loose.

One thing Prof. Yellen was clear about in her maiden voyage to Capitol Hill as leader of the Fed was that the Fed bore no responsibility for the boom-bust cycles in emerging markets. Indeed, she didn't venture into the debate about the so-called currency wars. These are ably handled in a chapter, "Currency Wars", in Prof. Eswar Prasad's new book The Dollar Trap: How the U.S. Dollar Tightened It's Grip on Global Finance (Princeton University Press, 2014). The so-called currency wars erupt when the Fed artificially pushes interest rates to levels below what would be their market or natural levels. In search for yield, the hot money flows to higher risk, higher interest-rate environs. This tends to strengthen the local currencies relative to the greenback. It also adds to the recipient countries' foreign exchange reserves and boosts their domestic money supplies. Asset booms and inflationary pressures follow. It was exactly this sequence that prompted Brazil's Finance Minister Guido Mantega to pronounce on 27 September 2010 that "We are in the midst of an international currency war ...". The same sentiments were echoed in November 2010 by China's Vice Finance Minister Zhu Guangyao, when he stated that the U.S."has not fully taken into consideration the shock of excessive capital flows to the financial stability of emerging markets."

The Fed-facilitated hot money flows and associated troubles they create are, of course, thrown into reverse when the Fed starts to tighten up. Countries that embrace sound economic policies mitigate the damage that can be thrown up by destabilizing hot money flows. This conclusion has been most recently reached in studies by the Organization for Economic Cooperation and Development in Paris. In short, the best mitigation protection is a combination of balanced budgets, low debt levels and free-market institutions.

Since last summer, Argentina and Venezuela have been in economic intensive care wards. My Johns Hopkins University — Cato Institute Troubled Currencies Project estimates that the annual implied inflation rate in Venezuela is 306% — over five times the official inflation rate. And Argentina's is 64%. That's more than double estimates made by private observers in Buenos Aires. But that's only one indicator of an economic malfunction. 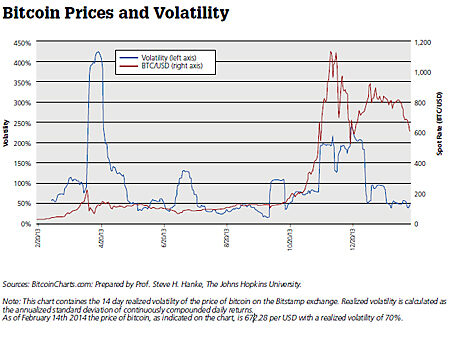 Not surprisingly, Venezuela is a bottom feeder. Indeed, even Zimbabwe has a higher score. Argentina is also weak and becoming weaker. As for Brazil, the first country to complain about hot money flows; it's weak and vulnerable, according to the World Bank's ease of doing business metric. Indonesia, another country that has been under pressure since last summer, is also vulnerable. Turkey, too, has been under the gun, with the Turkish lira putting in one of the world's worst performances in 2013. What characterizes all five of these countries is the fact that they failed to make hay (read: reform) when the sun shined (read: the hot money flowed in). In consequence, they are all vulnerable, in varying degrees, to the current hot money outflows.

Some people think this state of international monetary affairs will be solved by digital currencies — like Bitcoins. These are private currencies passed directly between two people without the need for a trusted third party. So, even though electronic, they resemble banknotes. While private digital currencies may yet have their day in the sun (read: in the international financial system), it won't be tomorrow. As the accompanying chart shows, Bitcoin is a highly volatile speculative asset. It's missing a necessary ingredient required to push the U.S. dollar aside: stability.

The East Asian dollar bloc, which was torpedoed during the 2003 Dubai Summit, should then return — with the yuan and other Asian currencies tightly linked to the greenback. As for other countries (Argentina, Brazil, and Venezuela, for example), they should adopt currency boards linked to either the dollar or euro, or, they should simply adopt the greenback or the euro.

Let's put an end to the "currency wars". When it comes to exchange rates, stability might not be everything, but everything is nothing without stability.