Taxpayers don’t like coughing up big amounts of money so other people can choose not to work. And they really get upset when welfare payments are so generous that newcomers are encouraged to climb in the wagon of government dependency.

This has an effect on the immigration debate in the United States. Most Americans presumably are sympathetic to migrants who will boost per‐​capita GDP, but there is legitimate concern about those who might become wards of the state.

Welfare migration also has become a big issue in Europe.

Reuters has a report on efforts by the U.K. government to limit and restrict the degree to which migrants from other E.U. nations can take advantage of redistribution programs.

“Cameron says he needs a pact to curb benefits for new migrant workers from EU countries… Proposals to allow British authorities to withhold in‐​work benefits for up to four years from EU citizens moving to work in Britain are under intense scrutiny.”

Welfare dependency is a bad thing in itself, whether one is a recent immigrant or a long‐​standing citizen.

You can understand why Cameron feels pressure to address this issue when you read horror stories about foreigners coming to England and living comfortable lives at taxpayer expense. This isn’t just a controversy in Britain.

The U.K.-based Guardian has a story on support for such measures in Austria.

"The Austrian foreign minister, Sebastian Kurz,...would not only call on the chancellor, Werner Faymann, to vote in favour of Cameron’s “emergency brake” on migrants’ benefits, but also to adopt the measure in Austria as soon as possible. ...”Those who don’t pay into the system will get fewer benefits or none at all,” Kurz told the newspaper Kronen Zeitung. “We should embrace that principle if we want to guarantee that our welfare state remains affordable and attractive for top talent.” ...he also supported Cameron’s call for the UK to be allowed to stop paying child benefit to EU migrants whose children live abroad."

European politicians are right to be worried. There’s evidence even from Sweden that welfare programs lure migrants into dependency.

And studies of American data show that excessive levels of redistribution can be at least a partial magnet for welfare recipients.

Here are some of the findings from a 2005 scholarly article by Professor Martin Bailey of Georgetown University.

"...the results also indicate that welfare benefits exert a nontrivial effect on state residential choice. ...the welfare migration hypothesis does not require welfare to exert a dominant effect, only a real effect. And here, the results provide strong, robust indications that the effect is real. ...the results imply that migration may discourage states from providing high welfare benefits because such generosity attracts and retains potential welfare recipients."

Professor Bailey then found in a 2007 academic study that states understandably impose some restraints on welfare spending because of concerns that excessive benefits will lure more dependents.

"Whether states keep welfare benefits low in order to prevent in-migration of benefit-seeking individuals is one of the great questions in the study of federalism. ...This article develops a model which...suggests that competition on redistributive programs does...constrain spending to be less than what the states would spend if migration were not a concern."

This makes sense, and it echoes the findings of a study I wrote about in 2012 by some German economists. Simply stated, you get better policy when governments compete.

But that doesn’t mean Cameron and other European politicians are doing the right thing. Instead of limiting handouts just for migrants, they should be lowering redistribution payments for everybody, including natives. 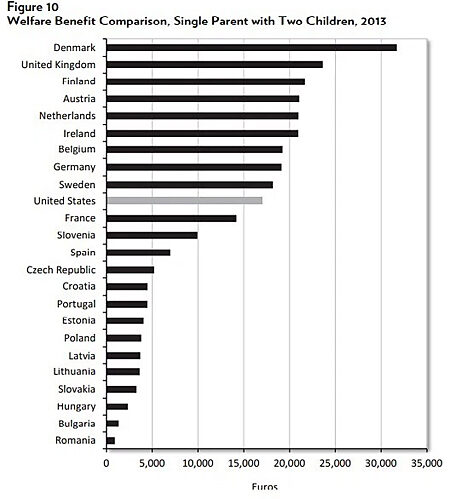 After all, European nations (like many American states) have elaborate redistribution systems that often make dependency more attractive than work. Indeed, the United Kingdom has a more generous package of handouts than almost every other European nation.

The bottom line is that it's a bit hypocritical (and in some cases perhaps even racist) for Cameron and others to target welfare for migrants without also addressing the negative impact of similar payments for natives.

P.S. To give British politicians credit, there have been some recent positive steps to reduce welfare dependency by cutting back on handouts.

P.P.S. In any event, Americans shouldn't throw stones because we live in a glass house based on our foolish laws that shower refugees with initiative-sapping handouts.

Tax‐​Subsidized Corporations? Tucker Carlson and Bernie Sanders Get It Wrong