Argentina and its peso are in trouble, again. By officially replacing the peso with the U.S. dollar, Argentina’s peso nightmare would end. But, in a country in which fiscal fiddlers know many tricks, some fiscal rules must also be added to the prescription.

Dollarization should impose a hard budget constraint on Argentina. Under dollarization, which exists in 33 countries, hard budget constraints are imposed because dollarized countries must finance government spending by taxing or borrowing in either domestic or international bond markets. They cannot finance government expenditures by using a central bank, which issues a domestic currency. As a result, fiscal deficits, when they occur, tend to be relatively small. But, there has been one noteworthy, unusual case: Zimbabwe. This case merits our attention.

In 2008, Zimbabwe suffered the second most severe episode of hyperinflation in recorded history. Zimbabwe’s annual inflation rate peaked in November 2008, reaching 89.7 sextillion (10^21) percent.  With prices doubling daily, Zimbabweans refused to use the Zim dollar, and Zimbabwe was spontaneously dollarized. In January 2009, the government adopted the U.S. dollar for its accounts, and dollarization became official. With that, a hard budget constraint was imposed on Zimbabwe.

Not surprisingly, Zimbabwe’s budget moved toward balance and the economy boomed. But, when President Robert Mugabe’s party, ZANU-PF, regained control in Zimbabwe in 2013, government spending and public debt surged. To finance its deficits, the government created a “New Zim dollar.” The New Zim dollar is issued at par to the U.S. dollar, but trades at a significant discount to the greenback. As a result of the issuance of the New Zim dollar, Zimbabwe was not longer purely dollarized. The resulting explosion in Zimbabwe’s total money supply created Zimbabwe’s second hyperinflation in less than a decade in October 2017.

This prohibition is particularly important in countries with a long history of fiscal shenanigans, like Argentina. To appreciate Argentina’s fiscal indiscipline, just take a look at its recent deteriorating fiscal performance. 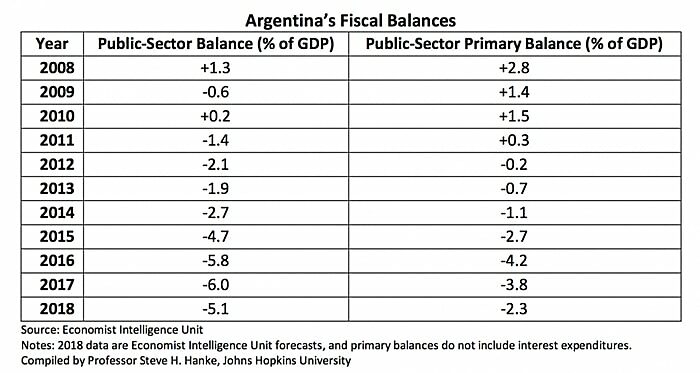 To make an elixir that would cure Argentina’s fiscal dysfunction once and for all, additional ingredients are required. As Vito Tanzi, one of the world’s leading public finance experts, demonstrates in his new book Argentina, from Peron to Macri: An Economic Chronicle, Argentina is a patient that is in a fiscal intensive care unit. And for those who might doubt this conclusion, no less than Domingo Cavallo had this to say when he endorsed Tanzi’s new book: “… Vito has come to understand very well Argentina’s idiosyncrasy, institutions and the nature of the protracted fiscal problems, and explains how these have led over time to major macroeconomic volatility, stagnation, and repeated crises.”

To complement dollarization, coupled with a prohibition of any unit of government in Argentina issuing any type of money, fiscal order and transparency must be established. Argentina must begin to publish a national set of accounts. These should include a balance sheet of its assets and liabilities and an accrual-based annual operating statement of income and expenses. These financial statements should meet international accounting standards and should be subject to an independent audit.

Just what is an accrual-based operating statement? At present, accounts in Argentina are kept on a crude cash basis. Revenues and expenditures are recorded when cash is received or paid out. With accrual accounting, spending and revenues are recorded when they are incurred, regardless of when the money actually changes hands. Accrual accounting gives a much more accurate picture of the realities, and avoids the many financial tricks that politicians can play with cash accounting. For example, under cash accounting, politicians can promise pensions for future retirees, but since no money is paid until people retire, there are no budgeted costs under cash accounting until the pensions are paid. With accrual accounting, the promises to pay future pensions would appear in the government’s accounts when the promises for future obligations are made. Consequently, under accrual accounting, the government cannot distort the magnitude of its spending obligations.

Do any countries use accrual accounting for their public accounts? Yes. For instance, New Zealand started to use it in 1989. As a result, New Zealand presents a far more transparent and honest picture of its government operations than do most other governments. This has allowed New Zealand to make more informed decisions and control its budgets more effectively.

In addition to rigorous and transparent accounts, supermajority voting should be established for important fiscal decisions in Argentina. Many countries do require this type of supermajority voting. Such a voting rule protects the minority from the potential tyranny of a simple majority.

The arithmetic of the budget shows us that two new fiscal rules would be sufficient to control the scope and scale of the government and protect minority interests in Argentina. Total outlays minus total receipts equals the deficit, which in turn equals the increase in the total outstanding debt. Rules that limit any two of these variables (total outlays, total receipts, or the deficit) would limit the third variable. Which two variables should be limited?

The easiest way to answer this question is to sketch an amendment to Argentina’s constitution:

Section 1. The total Argentine debt may increase only by the approval of two-thirds of the members of the Chamber of Deputies and the Senate.

Section 2. Any bill to levy a new tax or increase the rate or base of an existing tax shall become law only by approval of two-thirds of the members of the Chamber of Deputies and the Senate.

Section 3. The above two sections of this amendment shall be suspended in any fiscal year during which a declaration of war is in effect.

The adoption of these three rules would provide the ingredients for an Argentine fiscal elixir. This, coupled with dollarization, would generate a significant confidence shock in Argentina. And, with that, an investment boom and prosperity would follow.