Presidential elections: Like malaria or certain “social diseases,” they just keep coming back.

While it’s always nice to have an opportunity to “throw the bums out” and usher in a new set, I’m not remotely as excited about the 2012 choice as many of those in my increasingly frantic Twitter feed. Neither of the likely outcomes is anything to cheer. But, in the spirit of Monty Python’s Brian, I’d like to look on the bright side.

Despite himself, former Clinton Labor Secretary Robert Reich always manages to cheer me up. In a get‐​out‐​the‐​vote column in the Huffington Post last week, he wails: “If you succumb to cynicism, the regressives win it all.”

Whatever happens today, the good news is that the Cult of Obama has been badly weakened and with it, perhaps, the Cult of the Presidency.

“Cynicism” in politics is the Obamaites’ bete noire. President Obama decried “cynics” in his inaugural address, and on the campaign trail in 2008, Michelle Obama insisted that Barack Obama “is going to demand that you shed your cynicism… and that you engage.”

But what’s wrong with “cynicism” in the sense the Obamaites mean — skepticism toward politicians’ grand plans? Ambrose Bierce’s “Devil’s Dictionary” defines a cynic as “a blackguard whose faulty vision sees things as they are, not as they ought to be.” We could use more of that attitude toward presidential politics — and happily, it seems to be making a comeback.

Some of the better arguments for a Romney presidency are cynical indeed. Despite the GOP candidate’s China‐​bashing on trade, his demagoguing on Medicare for “our seniors” and his apparent belief that he can solve our fiscal crisis by eliminating the Corporation for Public Broadcasting — many of Romney’s supporters insist he’ll shake the Etch A Sketch and pursue different policies in office. Romney doesn’t mean what he says, they say. Given his record, they’re probably right.

The American Conservative’s Dan McCarthy suggests, tentatively, that a Romney win might “heighten the contradictions on the right to the point that reform becomes possible.” A rift could emerge “between frustrated hawks demanding a Dick Cheney agenda and business‐​minded Republicans who don’t want to blow their political capital” or bust the budget on adventurism abroad. What’s more, “the left… just might hold Romney’s feet to the fire on war and civil liberties.”

The best you can say about an Obama victory is his capacity for mischief would likely be diminished in a second term. He’ll have nothing resembling a mandate going into 2013, and things will get worse for him from there. As political scientist Colleen Shogan explains, all two‐​term presidents in the modem era have been plagued by some form of the “Sixth‐​Year Curse,” characterized by “scandals, weakened political coalitions, and midterm electoral defeat.”

Whatever happens today, the good news is that the Cult of Obama has been badly weakened and with it, perhaps, the Cult of the Presidency. To borrow a famous George W. Bush malapropism, rarely is the question asked, is our electorate learning?

Far be it from me to tell anyone how to vote. But let me make one suggestion about how to comport yourself on this Election Day. Please refuse that infantile “I Voted!” sticker they hand you at the polls. You are, presumably, a functional, taxpaying adult who reads the newspaper and strives to form intelligent opinions about public affairs. You shouldn’t be caught walking around with a laudatory label on your shirt, like you’re a five‐​year‐​old kid who just went to the dentist, got the bubble‐​gum flavored fluoride and didn’t squirm.

If voting is a civic duty, let’s try to make it dignified for the grown‐​ups.

Let’s Withdraw from Afghanistan, and Learn the Hard Lessons 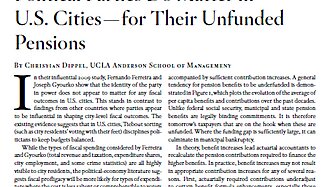 Blacklisting Huawei Could Cost Trillions, so Let’s Look Before We Leap