Broader embrace of economic liberalism in the Gulf region would be a harbinger of the unleashed effort and creativity of the whole population, followed by the powering of these nations into a new era of growth and prosperity.

Providing a quantitative assessment of the degree of economic liberalism within a country, the just‐​released Fraser Institute’s Economic Freedom of the Arab World index reveals stark differences among Arab countries, with the highest levels of economic freedom as of 2017 (the most recent data available) in Jordan, United Arab Emirates, Bahrain, Lebanon, Qatar, and Oman, while the lowest levels of economic freedom were in Egypt, Algeria, Sudan, Syria, and Libya,

If people are economically free, they can have a go at making their own economic decisions, taking advantage of economic opportunities, and freely diving into entrepreneurship and trade both at home and abroad. Someone’s economic freedom can be threatened by obstacles imposed by governments or privileged classes to protect their own dominance and economic gains. When opportunities to engage in economic activity are open to all, not just to the privileged classes, a new era of prosperity and opportunity unfolds as increased economic freedom unleashes the drive and ingenuity of the whole population. The data for 22 countries from the Arab League show that all too often the less privileged are denied the right to engage in economic activities by excessive bureaucracy, barriers to trade, restrictive regulations, the significant role of state‐​owned enterprises, corruption, and the weak rule of law.

According to the Fraser report, the Gulf countries particularly observe high scores for low barriers to international trade, which is reflected in their relatively low external tariff rates. Further, another positive observation from the report is that the United Arab Emirates, Bahrain, Kuwait, Qatar, Oman, and Saudi Arabia do not have a personal income tax. On the other hand, the role of state‐​owned enterprises in the economy, as well as the welfare state, is sizable in the Gulf countries, which brings down their economic freedom scores.

Why should these findings matter to people living in one of the Gulf nations?

Research consistently shows that economic freedom matters. According to more than 1,000 research in top peer‐​reviewed academic journals, people living in countries with high levels of economic freedom have higher levels of income, experience more rapid economic growth, have lower poverty rates, enjoy more political rights and civil liberties, and see lower gender and income inequalities. For example, countries in the top quartile of the Fraser Institute’s study had an average per‐​capita GDP of $36,770 in 2017, compared to $6,140 for bottom quartile nations. Further, in the top quartile, the average income of the poorest 10% is eight times higher than in the bottom quartile. Unsurprisingly, in the top quartile, only 1.8 percent of the population experience living in extreme poverty, defined as living on less than $1.90 a day, compared to 27.2 percent in the lowest quartile.

Just like across the world, development in the Gulf region is dependent upon the rise of economic freedom for the whole population. To achieve this end, opportunities to engage in economic activity need to be open to all, while at the same time, the excessive size of the state, high government consumption, and overreaching state‐​owned enterprises need to be scaled back. With this, the Gulf countries will attract more foreign direct investment, lower investment risk, and immerse itself deeper in the global value chains. For better or worse, the future is in their hands. 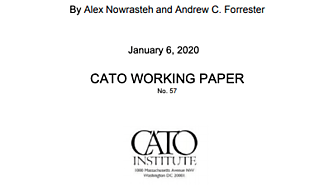