According to Jeff Halverson of the Capital Weather Gang, the recent storm (named winter storm Juno by The Weather Channel) was a textbook example of what is technically known as a Miller-B cyclone, and colloquially known as a ‘noreaster, as the primary winds are from the Northeast when the snow is flying. Noreasters are, by far, the major cause of snow along the Atlantic Coast, all the way from North Carolina to Maine. 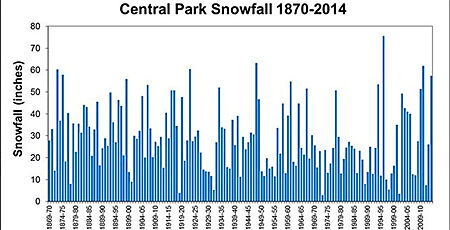 There’s no denying climate change, as average surface temperatures are about 1.4°F warmer than they were in the 1860’s, when there were enough reliable weather stations to make an accurate estimate. A fraction of that warming is in the Northern Atlantic Ocean, and some of this Atlantic warming is from other causes such as internal ocean circulation cycles decades in length.

Onshore temperatures where Juno spun up are about 2°F above average—but don’t necessarily relate that to climate change as there is a big patch of water about 1000 miles to the northeast just as below average temperature. It seems logical a slightly warmer ocean will yield a tad more moisture which, if significant, should show as increased snowfall in our coastal cities. It turns out there are other things that go along with a warmer ocean that compensate for this effect.

This last storm was, as Halverson said, a Miller-B cyclone in extremis. When these really wind up (and that happens every year or two), they develop what is called a “warm seclusion” at their center, and for twelve hours or so they look a lot like hurricanes to the untrained eye, complete with a cleared-out center.

The sum‐​total of the newly revealed climatic truths from Juno is zero.

Ryan Maue, a hotshot meteorologist for WeatherBell Analytics, recently won his PhD with a dissertation entitled “Warm Seclusion Extratropical Cyclones.” As Maue tweeted the afternoon before the storm, Juno was going to be one. The rules of the PhD game are that your dissertation must fundamentally advance the state of knowledge on a given subject, so Maue knows more than just about anyone in the world about big‐​time noreasters.

The afternoon before the storm, Maue had a Twitter field day, pretty much demolishing any claim that a warmer ocean was going to enhance Juno. Ultimately he concluded that it is “easy to make case that global warming weakened this blizzard significantly due to warmer SSTs [sea‐​surfaced temperatures].”

Because the vast majority of Atlantic Coast snow is from noreasters, there’s an even simpler way to test Cuomo’s statement—how about we just look to see if snowfall is increasing?

It is not. Below is the annual snow history for New York’s Central Park, which hasn’t missed a storm since the fall of 1869. It is obvious: there is no upward trend whatsoever. Given that noreasters cause almost all of its snow, there’s no way that climate change is enhancing their snow production.

The sum‐​total of the newly revealed climatic truths from Juno is zero. It was a very strong noreaster, similar to ones that occur every year or two. It produced a heckuva lot of snow, like other warm‐​seclusion storms in the winter, and there’s no evidence it is being juiced by global warming.