Only 12 percent of likely U.S. voters favor a federal budget that increases government spending, but that’s just what the bipartisan budget deal passed by the House late [last] week does. It restores billions cut by the sequester on March 30 and puts off potential savings for several years.” This quotation does not come from some conservative blogger, but from the respected polling company, Rasmussen, in its report of Dec. 14.

Why do the stated preferences of the voters so differ from the actions of their elected representatives in Congress and the White House? The simple answer is: Most people understand that the endless growth in federal spending is going to lead to disaster, but each voter likes the specific spending programs that benefit him and thinks that spending cuts ought to be made elsewhere. Thomas Jefferson once observed, in referring to the new government, “when the people realize they can vote themselves benefits, all is lost.” At the moment, almost 50 percent of the American people receive government benefits, including Social Security, Medicare, Medicaid, food stamps and unemployment insurance payments.

Nothing will improve until Americans feel the pain of government overspending.

Particularly since the Great Society programs under President Johnson, most of the Democratic Party has been in denial about the cost of the so-called entitlement programs (more correctly labeled “income-transfer programs”) with endless gross underestimates. President Obama’s untruthful statements about Obamacare, including its cost, is just another in a long line of misrepresentations by leading Democrats. This is the same party that is very concerned about product misrepresentations by business people and correctly demands major fines or prison time by those convicted of misrepresentation. Yet no businessman in history has ever come close to the scale and cost of misrepresentation by the advocates of Obamacare. What is Washington without hypocrisy?

Most Republicans have been willing to acknowledge the challenges of excessive government spending, and even entitlement spending. However, even when they were in control of both houses of Congress and the White House, they did not make the reforms necessary to address the problems, and, in fact, often added to them with pet spending programs of their own.

Over the past couple of decades, each party has, at some point, been in control of both houses of Congress and the White House. They could have made the changes to avoid the current and growing economic crisis if they only had the desire and the courage. Both parties were irresponsible. 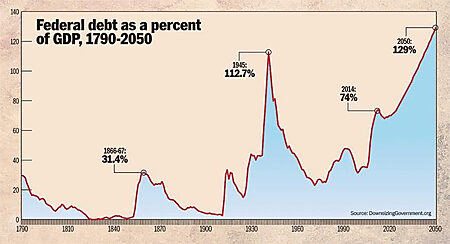 As every rational person should understand, the current situation is unsustainable, and there is no tax solution to spending as a rising share of GDP. In fact, tax increases will only make the situation worse by further slowing private-sector growth and increasing the demand for government services and payments.

The cures are well known. Junk government agencies, programs and regulations that do not meet cost-benefit tests, of which there are many. Even President Obama acknowledged a couple of weeks ago that some government agencies have “outlived their usefulness” — even assuming they were useful to begin with. Turn back to the states, where they belong, programs that are not specified in the Constitution as within the purview of the federal government. A list of useful recommendations of where to reduce government spending may be found at DownsizingGovernment.org.

The continued inaction by Congress can be attributed to lobbying by the dependency class against necessary program reductions, as well as a misunderstanding by a majority of the people of how excessive government spending is denying them income by reducing wage growth and job opportunities. It also depresses their return on savings as the Fed has chosen to, in effect, levy a tax on savers in the form of low-interest rates, rather than to recognize the cost of excessive government spending through inflation.

Change will only come when the majority of the people understand that enough is enough and throw the reality-deniers, policy liars and the timid out of Congress or force them to change their spots. The British had had enough in the late 1970s and elected Margaret Thatcher. A year later, Americans had had enough and elected Ronald Reagan. Who is next?