You couldn’t ask for a clearer illustration of the Trump adminstration’s incoherent stance on intelligence surveillance. Late Wednesday night, the White House released a statement urging the House to reauthorize the FISA Amendments Act, the controversial law authorizing warrantless electronic surveillance of foreigners’ communications, and opposing an amendment cosponsored by Reps. Justin Amash (R‐​Mich.) and Zoe Lofgren (D‐​Calif.) that would require FBI agents to obtain a warrant before searching for Americans’ messages in the vast database created under the authority.

Just hours later, apparently reacting to a segment on Fox News, however, Donald Trump appeared to condemn the very legislation his administration had just endorsed: 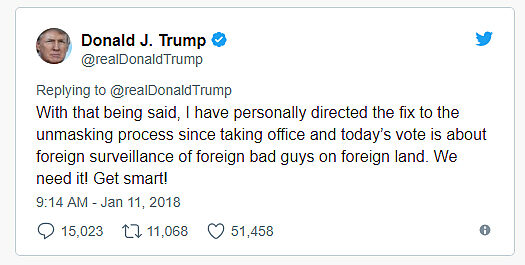 It’s worth pausing for a moment to note that nearly everything in both of these tweets is wrong. Thursday’s vote in the House was on reauthorization of the FISA Amendments Act of 2008—section 702 of which provides for the targeting of foreigners—not the underlying FISA statute passed in 1978. Wiretap orders for former Trump campaign officials Paul Manafort and Carter Page were obtained under that original FISA authority, not section 702, and those orders don’t appear to have covered the time they were actually working for the campaign. It remains unclear what role, if any, 702 has played in the investigation into Russian election interference currently being spearheaded by special counsel Robert Mueller. Since surveillance under 702 does not require case-by-case approval by the secret Foreign Intelligence Surveillance Court, wiretaps conducted pursuant to that authority would not have needed any “help” from the infamous Steele dossier. Finally, while CNN has reported that the dossier was cited in at least some FISA applications, there is no evidence that it was the primary basis for the warrants that ultimately issued: Most experts seem to agree such a dossier would likely have been used as, at most, one of multiple corroborating sources for any facts alleged in the applications.

The follow-up tweet is also off base, however. A provision targeting the procedures for “unmasking” the identities of Americans swept up in 702 surveillance was part of an earlier version of the reauthorization bill, but it was dropped from the language voted on by the House on Thursday. And while section 702 does indeed require that the targets of warrantless surveillance be foreigners located abroad, it can be used to target any foreigner—not just “bad guys”—as long as it’s for a valid intelligence purpose, and it is not limited to their foreign communications. Indeed, the central controversy over the bill centers on the FBI’s ability to conduct “backdoor searches” in the vast 702 database seeking communications between those foreign targets and Americans. Opponents of the Amash/Lofgren amendment during the ensuing House debate even argued that 702 surveillance would be “crippled” if FBI agents could not routinely conduct such searches—casting them not as peripheral, but essential to the intelligence value of the authority.

There’s a glaring contradiction in the administration’s attitude toward its own spy agencies.

Leave those policy details aside for the moment, however. These conflicting messages only shine a spotlight on the longstanding contradiction between the adminstration’s words and actions when it comes to intelligence surveillance.

For the past year, Donald Trump has routinely attacked his own intelligence community as a den of vipers eager to abuse their powers to meddle in politics, at one point even comparing the intelligence agencies to Nazis. He has (without apparent basis) accused them of illegally wiretapping his offices at Trump Tower, of carrying out a “politically motivated hoax” investigation at the behest of Democrats, and (more plausibly) of illicitly leaking intercept transcripts to the press. His allies in the media—and even some in Congress—have zealously echoed this narrative of a treacherous “Deep State” committed to undermining the Trump administration by any means necessary. It is a narrative of corruption and political abuse of intelligence powers so extensive that it makes the concerns voiced by traditional civil libertarian groups sound downright polyannaish.

A few Republicans—such as Sen. Rand Paul (R‐​Ken.) and Rep. Thomas Massie (R-Ken.)—have both echoed this narrative and drawn the obvious conclusion from it: That such abuses imply an urgent need to impose additional safeguards. Yet when it came to an actual vote Thursday morning, Republican leadership—and ultimately even Trump himself—came down in opposition to the most elementary check imaginable on NSA and FBI’s sweeping wiretap authorities: A requirement that a judicial warrant be obtained before repurposing a foreign intelligence database to scrutinize the private communications of Americans. Instead, most fell back on a more familiar Republican argument: Broad wiretap powers, unhampered by too much judicial oversight, are necessary to keep us safe, and Americans must trust the patriotic employees of the intelligence agencies to use those powers responsibly.

One does not, of course, have to believe all (or any) of Donald Trump’s fevered claims about persecution by the Deep State to think the FBI should need a warrant to read your e‐​mail. History provides abundant genuine examples of American spies abusing their powers, whether or not one thinks Trump belongs on the list of victims. But the converse position is simply untenable. Republicans who voted to extend this warrantless spying authority for six years have demonstrated that, whatever they say on cable television, they either do not truly believe the portrait Trump has painted of the intelligence community or—worse—only think it’s a problem when Democrats are in charge.

The Peculiar Priorities of Adam Schiff

Every Day, We Vote with Our Clicks That We Value Facebook