Recently, I had a conversation with an American acquaintance, who bemoaned the lack of “free” education and healthcare in the United States. “Even Cuba,” he continued with a non‐​sequitur, “has higher literacy and life expectancy [than America].” In case you wonder what circles I happen to move in, recall that even President Obama recently waxed lyrical about Cuba’s education and healthcare. To quote the sage of 1600 Pennsylvania Avenue, “I said this to President Castro in Cuba. I said, look, you’ve made great progress in educating young people. Every child in Cuba gets a basic education—that’s a huge improvement from where it was. Medical care—the life expectancy of Cubans is equivalent to the United States, despite it being a very poor country, because they have access to health care. That’s a huge achievement. They should be congratulated.”

When it comes to life expectancy—an excellent proxy for the standard of living in general and health of the populace in particular—dictatorships can’t hold a candle to democracies.

The left has a long history of lionizing Cuba’s education and health, while ignoring or downplaying the island’s poverty and dictatorship. Underlying all conversations that I have had with American leftists about Cuba has been an implicit acceptance of a tradeoff between freedom and “free stuff.” “Yes, Cuba is not a democracy,” the argument usually goes, “but at least they have free education and healthcare. And, we don’t!” The casual way in which the left glosses over Cuba’s dictatorship is all the more remarkable considering that here at home the left is hypersensitive to voting rights and the supposed attempts by the political right to disenfranchise America’s minorities.

And that got me thinking, what is the relationship between literacy and life expectancy on the one hand, and democracy and dictatorship on the other hand? In 2012, the last year for which Human Progress has data on Cuban literacy, 40 out of 73 countries and territories surveyed by UNESCO had literacy rates among adults higher than 90 percent. With 99.75 percent, Cuba came in second place—after Azerbaijan. According to Freedom House, out of the 40 countries and territories in the top decile, 35 percent were politically free, 35 percent were partly free and 27.5 percent were unfree (the rest had no Freedom House score).

What are we to make of this? It may well be that a literate population is relatively highly valued by both dictatorial and democratic government. When newspapers are tightly controlled by the government, having the populace read the government propaganda seem like a good thing. But, when it comes to life expectancy—an excellent proxy for the standard of living in general and health of the populace in particular—dictatorships can’t hold a candle to democracies. 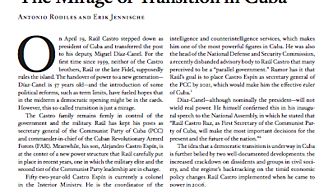