It is a time of crisis, and perhaps you’ve considered purchasing a gun. You’d never want to admit that to many of your friends, because you’ve always been a believer in gun control. But things are getting crazy, and we don’t know how much crazier it’ll get.

You’re not alone. According to the National Shooting Sports Foundation, background checks for firearm purchases in March 2020 were up 80.4% over March 2019 numbers. The week of March 16 had the most gun background checks ever performed in a single week.

Many friends have contacted me over the past few weeks, asking for advice on their first gun purchase. Some of those would broadly put themselves in the “gun‐​control” camp, but new realities might require a change in priorities.

Some people will have a new view of the possible dangers in the world, and that will have to be weighed against the risks of owning a gun.

The question of whether you should own a gun has always centered on a personal cost/​benefit analysis. Some gun control experts argue that the answer is clear and scientific: A gun in the home increases the risk of death, and, therefore, you shouldn’t have one. While some of the data and reasoning in those claims are contentious, the basic idea is clear, if not banal: Not having guns in the home is a foolproof way to prevent gun accidents. Similarly, not having a pool is a foolproof way to prevent accidental pool drownings.

But for some people, there are good reasons to have a gun just as there are good reasons to have a pool. For many, guns are a source of entertainment, whether as a collector, a hunter, or just going to the shooting range. Guns are also used for self‐​protection, and whether you need self‐​protection is another personal question based on your sense of safety. That’s always been true. People who live in violent places tend to have more guns for self‐​protection. In a pandemic with an uncertain and scary future, many people are reassessing their sense of safety.

You’ve probably had some dark thoughts along these lines: How bad can this get?

Two weeks ago, you wouldn’t have dreamed we’d be in this situation. Where will we be two weeks from now? A month? The essential elements of society are still operating, more or less, but we know very little about how long this will go and how difficult it will be. Unemployment and poverty will skyrocket. If food production and supply get disrupted, things could get bad very quickly.

Gun rights advocates are often ridiculed for having an almost neurotic fear of oppressive government and societal breakdown. They’re mocked for believing guns are a defense against tyranny when they live in a country with the largest and most advanced military the world has ever seen. While that military has a pretty bad track record fighting insurgents carrying small arms, such unrest is unlikely to happen here.

What is far more likely, and what many “preppers” fear the most, is a societal breakdown that causes other citizens to become the biggest danger. That can happen during a civil war, an invasion, a natural disaster, or a pandemic.

This is not meant to scare you. I’m optimistic. I believe that times of crisis can, and usually do, bring out the best in people. But there’s certainly some chance of violent disruption, especially on a local level. One percent? One‐​tenth percent? Five percent? Who knows?

As B.J. Campbell of Open Source Defense has written, those living in floodplains face a similar calculus. The “100‐​year flood” is one that has a 1% chance of occurring in any given year, which equates to a 26% chance that a flood will happen within the time of a 30‐​year mortgage. If your house is in the zone, you should probably have flood insurance.

A society‐​disrupting event where a gun might be useful, if not needed, might be a 1,000-year event, whatever the cause. A 0.1% chance of it happening in any given year equates to a 92.3% chance it doesn’t occur within an 80‐​year lifespan. That, of course, leaves a 7.7% chance it does.

Of course, there are more things to consider than this simple math. This is not a time to simply say, “Checkmate, gun grabbers.” But the personal choice of whether to have a gun should change with the times and the situation. Some people will have a new view of the possible dangers in the world, and that will have to be weighed against the risks of owning a gun.

After we come out of this pandemic, the stockpiling of food and water is likely to go up. There could be more anxiety about times when such essentials are unobtainable or difficult to get, and there will be an understanding that if that time occurs, there will be desperate people who might be dangerous. Protecting yourself and your loved ones might then be necessary. It could be better to have it and not need it than need it and not have it.

A COVID-19 Silver Lining That Could Be Even Shinier 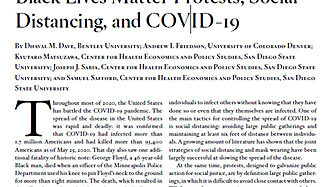