The U.S.-China trade war has reignited debate over the question of whether Chinese ownership of U.S. government debt is an asset that Beijing will weaponize. In other words, is the possibility that the Chinese could sell off large swaths of their $1.1 trillion holdings of U.S. treasury securities, causing bond prices to fall and interest rates to rise, something that should concern U.S. policymakers? Although profligate spending and an accumulating national debt may well be the toxins that eventually destroy the U.S. economy, the fact that the Chinese own some of that debt neither gives Beijing leverage over U.S. policy nor does it present a threat to the U.S. economy.

The fact that the Chinese own U.S. government debt neither gives Beijing leverage over U.S. policy nor does it present a threat to the U.S. economy.

For starters, consider why the Chinese buy U.S. debt in the first place. For two decades, the Chinese have been purchasing U.S. treasuries not as a favor to the citizens of the United States, but because it has been in China's interest to do so. Nobody in Washington forces or begs the Chinese to buy U.S. debt. All by themselves, the Chinese (like investors at home and across the globe) see the value proposition. It just so happens that U.S. government-issued debt securities are considered the least risky investments in the world. Investors know their assets are safe, accessible, and guaranteed to be repaid virtually on demand.

That's not to say Americans haven't benefited handsomely from China's investment decisions. The inflow of Chinese (and other foreign) capital to U.S. debt and equity markets has helped keep interest rates well below historical averages, effectively serving to subsidize U.S. consumption, which, in turn, has kept Chinese factories—as well as factory workers, software engineers, designers, accountants, and sales representative in other countries (including the United States)—humming along for decades.

Another reason for China's appetite for U.S. treasuries is that purchasing dollar-denominated assets helps prop up the value of the dollar, which is an outcome that has been favorable to Beijing from an exporting perspective because U.S. demand for Chinese goods tends to rise with the value of the dollar. Meanwhile, over the years, a strong or strengthening dollar has helped preserve the value of China's existing portfolio of U.S. debt and other dollar-denominated assets.

Second, even if China did want to sell treasuries (for reasons belligerent or benign), the impact wouldn't be profound unless massive amounts of selling were undertaken abruptly. But that approach almost certainly would hurt China more than the United States. China's debt portfolio, which is valued currently at just over $1.1 trillion, would fetch far less as the fire sale caused bond prices to drop—a 5 percent price decline, for example, could amount roughly to a $50 billion loss for Chinese investors. Meanwhile, the resulting higher interest rates would be short-lived, as demand for U.S. debt from other investors would pick up the slack. 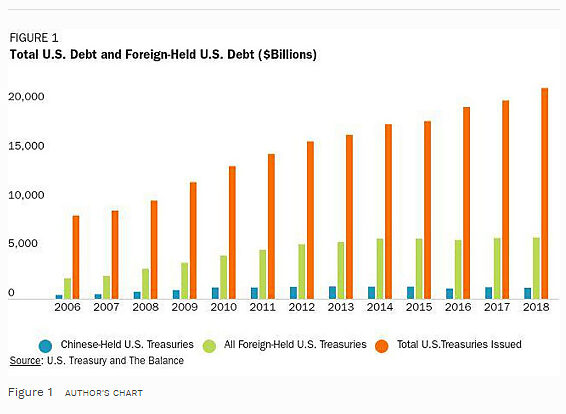 Consider Figure 1 (nearby), which depicts total U.S. debt, total foreign-held U.S. debt, and Chinese-held U.S. debt. Total U.S. debt in 2018 was about $21.5 trillion. Foreigners held $6.3 trillion (30%), of which Chinese investors held $1.1 trillion (5%).  Chinese investors are the largest foreign holders of U.S. debt, but the value of those holdings accounts for just 17% of all foreign-held U.S. debt and only 5% of total U.S. debt, which indicates that U.S. debt is a popular investment choice. In other words, if China were to sell its treasuries, it is very likely that there would be sufficient demand in other countries and in the United States to keep interest rates from rising significantly.  And if interest rates remained steady because non-Chinese demand for U.S. debt picked up the slack, then China’s selling will have had no “strategic” impact.

So, it seems that China could create, at most, a short-term problem for the United States by dumping its treasuries, but only if Beijing is willing to absorb a big loss. That seems unlikely.

Now, factor in the phenomenon known as “flight to safety” or "flight to quality" and the notion that China can use its debt holdings to exert any influence over U.S. policy becomes untenable. As my colleague Logan Kolas wrote recently:

Demand for U.S. debt tends to rise in the midst of global crises. U.S. treasuries are considered the safest assets in the world, so investors often turn to them during times of financial strain. Increased tensions caused by escalating tariffs and trade wars induce policy uncertainty and perverse economic decisions.

Paradoxically, even if the crisis is precipitated by the U.S. government’s firing of the first shot and its escalation of the trade war, the ensuing global uncertainty encourages foreign investors to lend more money to the offending government because it is trustworthy. 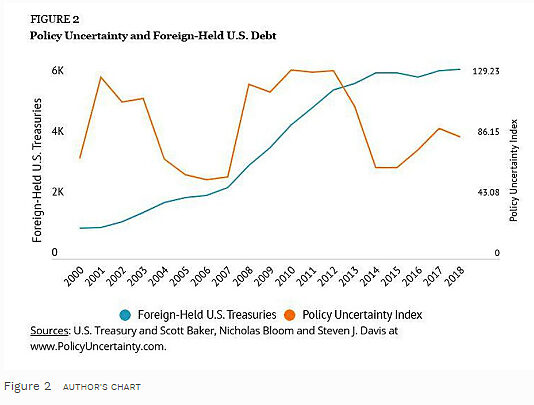 Figure 2 (nearby) plots a Policy Uncertainty Index alongside the value of foreign-held U.S. debt. It suggests a positive correlation between the two and supports the conclusion that any precipitous, unexpected, or unconventional policy measures undertaken by governments that can shake markets, including measures intended to drive up U.S. interest rates, will increase demand for U.S. debt, which will keep those rates low.

Beijing understands this and will not weaponize its U.S. debt portfolio.

The Tariffs Will Bite U.S. Consumers: Prepare to Feel Their Effects More Than Before

Trump Is Wrong to Be ‘Tough’ on Trade with China

The Trade Deal China Wants Isn’t Just Bad, It May Be Illegal