One of the trade challenges Joe Biden will have to face as president will be how best to manage the U.S. dispute with the European Union over Boeing and Airbus. The fight seems never‐​ending, but one background detail has made it more urgent: China is preparing to break into the aircraft market and claim a large share from its vulnerable adversaries.

The U.S.-EU dispute escalated earlier this month when Brussels announced new tariffs on $4 billion of U.S. exports, in retaliation for subsidies Washington provides to give Boeing a leg up in the airplane market. The EU’s move follows the restrictions the U.S. imposed last year on $7.5 billion of EU exports, from cheese and pork to olive oil and wine.

Unlike many of the tariffs the Trump administration has imposed over the past four years, these mutually retaliatory tariffs are perfectly legal under international law because they have been authorized by the World Trade Organization.

Two parallel WTO cases have resulted in parallel rulings: The EU has violated WTO subsidy rules by aiding Airbus, and the U.S. in turn has violated those same rules by aiding Boeing. Because WTO jurists have determined that neither side has complied fully with these rulings, each side has been given legal permission to levy new border taxes against the other.

The tariffs have stoked economic pain on both sides of the Atlantic, especially amid the global downturn caused by Covid‐​19. The failure to resolve this dispute also further complicates the misfortunes of the aviation sector, which is among those that have suffered most during the pandemic.

The beginnings of the standoff trace to the 1970s, when Airbus (owned jointly by French, Spanish, German and British interests) first began to take significant market share from Boeing, which had previously been a virtual monopoly. The full‐​blown dispute began in 1992, after the U.S. and the EU agreed to limit the governmental subsidies granted to both.

In 2004, that agreement fell apart because of trans‐​Atlantic differences over what types of state aid were permitted. The U.S. pulled out of the agreement and filed a WTO case against the EU’s subsidies. In reply, the EU filed a similar WTO case against the U.S. Sixteen years of complex litigation followed.

The WTO cases concluded this year, but neither side has agreed to talks that might lead to full tariff repeals and an end to Boeing and Airbus threatening each other’s viability. That resolution should occur sooner rather than later. For now, the two companies retain a global duopoly in producing large civilian aircraft, but the market is about to change dramatically.

China, which soon will become the world’s largest aviation market, has for years sought to become a major aviation manufacturer as a part of its Made in China 2025 plan. One of the 10 key sectors China has targeted in its industrial policy is aerospace and aeronautical equipment.

Beijing’s hopes—along with untold sums—have been placed in a state‐​owned enterprise, the Commercial Aircraft Corporation of China, or Comac. Until recently, Comac lagged several years behind in its plan for making a large passenger jet to compete with Boeing and Airbus. The two Western giants generally dismissed the likelihood of genuine Chinese competition any time soon.

That calculation changed last month. Comac’s 168‐​seat narrow‐​body C919 jet, a potential competitor to Boeing’s 737 MAX and Airbus’s A320neo, performed its first air‐​show flight, at the Nanchang Flight Convention. Comac is seeking certification for the C919 in 2021, and the first deliveries of the plane are scheduled for that year.

China may continue to trail the U.S. and EU in this sector, which is based in some of the world’s most advanced technology. But China’s progress in fields such as telecommunications and weapons manufacturing suggest that it should not be underestimated in any sector. Declining demand for large civilian aircraft during the pandemic may also give the Chinese an opening to seize a share of a shrunken short‐​term market by undercutting Boeing and Airbus on price.

Because the U.S. and the EU for decades have been the only global producers of large civilian aircraft, all other WTO members have long been willing to let the two of them cut a separate deal on their aircraft subsidies. But if the two powers don’t resolve their dispute soon, they may have to make room for China at the negotiating table. 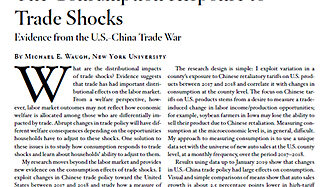 The US Political Free Trade Vacuum

US Shouldn’t Leave the WTO Over China