Few people are aware of (or care about) the role that beryllium plays in people’s lives, but a last minute, unexpected expansion of a workplace rule regulating it may push numerous people out of a job.

Beryllium is an extremely light metal that forms a strong alloy when combined with various other metals. It is a key material in the construction of spaceships and satellites, as well as other items that must be able to withstand potentially high pressures.

It is also potentially harmful to humans if ingested in sufficient quantities. While few people receive any exposure to the element (which is quite rare) in their day‐​to‐​day lives, people who work in industries that use beryllium may be exposed to dust containing particles of the metal.

In 2012 the Obama administration announced that it was contemplating reducing the already-low exposure standards for industrial workers, and 2015 OSHA proposed a rule to limit worker exposure to beryllium beyond current standards. The proposal targeted the industries and production procedures that created the greatest risk of exposure, such as the manufacture of beryllium alloy.

The rule explicitly precluded workers exposed to extremely low levels of airborne beryllium, such as those performing abrasive blasting work with coal slag in the construction and shipyards industries. The logic for excluding construction and maritime work from the OSHA rule was that the benefits of the rule covering those industries appeared to be rather slight compared to the anticipated compliance costs. Such industries already take stringent measures to prevent workers from being exposed to potential toxins, which includes beryllium. Abrasive blasting in particular is already subject to over two dozen OSHA rules governing worker safety, including preventative measures to avoid undue exposure to airborne chemicals. 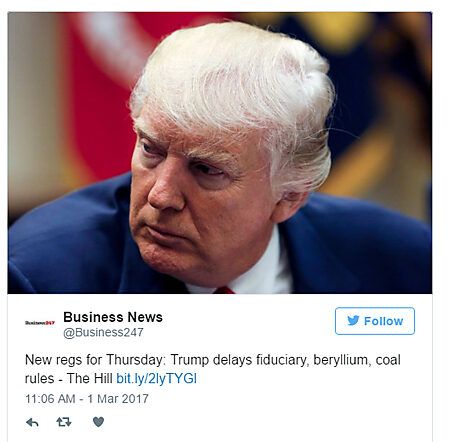 The various entities who stood to be impacted by the revised law — the workers and their labor unions, manufacturers, and other interested parties — offered comments on the proposed rule over the following year. However, during that time the administration offered little indication that it would significantly alter the proposed rule, and the industries most likely to be impacted had begun contemplating the its impact of the new rule on their operations.

However, when the final rule was finally issued, less than two weeks before the end of Barack Obama's term, the scope had been unexpectedly widened to include those previously exempted industries.

While the administration felt no apparent compunction about making a radical last minute change, it did feel obliged to offer some direction to companies affected by the expansion of the new rule, and how they might manage to adjust their operations in a cost-effective way. One potential approach to mitigate worker exposure, it averred, would be to simply automate their operations so that the production process involves fewer people.

While that may seem to be a common-sense recommendation for an administrative body, it's a politically tone-deaf, potentially counterproductive suggestion.

This avowed capitalist gives no truck to protests against the general mechanization of society today, which has led to a resurgence of luddism in certain quarters. The rapid technological advances of the last two centuries have led to an enormous improvement of productivity that has greatly expanded our standards of living across the income distribution.

However, the government’s explicit direction that companies automate in the name of protecting workers against a potential health hazard that would likely not survive an honest cost-benefit analysis is not the path to increased prosperity.

While it may not seem intuitive to most people, excessive regulation imposes real costs on society — the minimal safety gains that the last-minute extension of the enhances beryllium standards will do little to improve the safety of workers while costing the economy thousands of jobs.

The Trump administration has stayed the enactment of the beryllium rule, along with various other last-minute regulations enacted by the Obama administration. It would do well to reexamine the rule and its last-minute modifications and ensure that those changes past a stringent cost-benefit test.

Many Americans Support Paid Family Leave — Until They See the Cost