News that Turkey had sent its military into northeast Syria, after receiving a tacit green light from President Trump, marked a grim low point in U.S. involvement in the lengthy, multisided Syrian civil war. The fate of Kurdish forces who battled ISIS and civilians sheltered in refugee camps have generated understandable concern. But there has been too little reflection on how we arrived at this unhappy place. Americans should learn from the experience and pledge to avoid similar debacles in the future.

The many problems with U.S. intervention in Syria began with an extraordinarily ambitious, and ultimately irreconcilable, set of goals. U.S. officials wanted to take advantage of the Arab Spring reform movements that erupted in early 2011 to oust Bashar al-Assad’s regime, while also thwarting Russian and Iranian ambitions in Syria and beyond. Both the Obama and Trump administrations relied on some violent extremists to defeat other radical groups, especially the Islamic State, which sought to establish its so‐​called Caliphate. Supporting regime change in Damascus undercut efforts to counter ISIS. Moreover, as ISIS gained strength, the United States enlisted the help of—and armed—Kurdish fighters, which contradicted promises to NATO ally Turkey. Particularly worrisome to Ankara was U.S. support for fighters associated with the Kurdistan Workers’ Party (PKK), a Marxist‐​Leninist organization which the U.S. government still lists as a terrorist organization.

In other words, successive administrations adopted policies toward a new and informal partner which conflicted with the long‐​held security concerns of a treaty ally of nearly sixty‐​eight years. In recent months, President Donald Trump has reiterated his desire to withdraw all U.S. forces from Syria and hinted that he might give in to Turkish President Recep Tayyip Erdogan’s demand that the United States withdraw support from the Kurds along Turkey’s border. In both cases Trump encountered fierce resistance from within his administration and throughout the Washington foreign‐​policy establishment, and he retreated from that pressure. The White House’s latest announcement suggests that he still wants to wash his hands of the entire Syria imbroglio.

Policymakers should commit U.S. forces to wage war only when vital interests are stake, the mission is clear, and the objectives are attainable. The Syrian escapade never met any of these criteria.

The ensuing bipartisan inside‐​the‐​Beltway furor was entirely predictable. Reflexive Republican hawks, such as Rep. Marco Rubio (R-FL) and Liz Cheney (R-WY), and even on‐​again, off‐​again Trump supporters like Sen. Lindsey Graham (R-S.C.), blasted the president’s decision. Leading Democrats got in their digs, too. Sen. Bernie Sanders called Trump’s decision “extremely irresponsible” and predicted it was “likely to result in more suffering and instability.” House Speaker Nancy Pelosi denounced the president for betraying the Kurds and “deserting an ally in a foolish attempt to appease an authoritarian strongman.”

Such opposition seems partly rooted in revulsion at Trump’s utter disregard for the effect that his decision is likely to have on millions of people—including, in this case, Kurds who fought alongside U.S. forces in the region. But this decision is little different than many others that he has issued as president. Trump appears unable or unwilling to consider others’ well‐​being. Reince Priebus, Trump’s first White House chief of staff, observed that “the president has zero psy­chological ability to recognize empathy or pity in any way.” An anonymous senior administration official noted “the president’s amorality … he is not moored to any discernible first principles.”

Trump’s hamfistedness may also make more difficult a military withdrawal that is not only justified but inevitable. Bashar al‐​Assad survived eight years of civil war, and, with the aid of Moscow and Tehran, has consolidated control over much, though not all, of Syrian territory. A small U.S. presence cannot force Assad to yield, ensure free elections, limit Russian influence, oust Iranian forces, prevent an Islamic State revival, or protect the Kurds. And yet too many in Washington hope that it can.

A renewed commitment and additional resources, including troops, money, and diplomats, would struggle to deliver on even a few of these goals, but there is no appetite for such an undertaking. Americans outside of Washington oppose yet another open‐​ended mission in the Greater Middle East.

Moreover, the U.S. mission in Syria does not advance a vital U.S. national‐​security objective; the threat from ISIS has always been overblown, and claims that a few hundred—or even a few thousand—U.S. ground troops are all that stand between the group and a global resurgence defy all logic. The Islamic State challenged every government in the region, and was ultimately thwarted: it beggars belief that Iraq, Iran, Syria, Jordan, Turkey, and multiple Gulf States cannot deal with the radical remnant. After all, ISIS and other violent extremists pose a greater threat to them than to the United States.

Even more unrealistic is the notion that the United States can transform the Syrian political order, or that a few thousand troops give us much leverage over the process. Assad survived his moment of greatest peril and Washington cannot force Iran and Russia to abandon him now. More to the point, the United States survived much of the Cold War with a hostile Syria allied with a globe‐​straddling Soviet Union. A much‐​weakened Assad is more liability than asset for Vladimir Putin’s Russia.

Washington should be reducing its permanent overseas presence and expecting local forces to secure their own interests. Going forward, U.S. officials should choose allies more carefully and drop former friends when circumstances change. Additionally, NATO needs a process for expelling members no longer committed to the alliance’s common purpose. In any case, the United States should avoid making conflicting commitments to multiple allies.

Even more important, Washington should choose its fights more carefully. Not every problem is America’s to solve, and not every problem can be solved by U.S. military power. Policymakers should commit U.S. forces to wage war only when vital interests are stake, the mission is clear, and the objectives are attainable. The Syrian escapade never met any of these criteria. Alas, it likely will take more than a couple of Trump tweets to cure the U.S. government of its interventionist addiction. 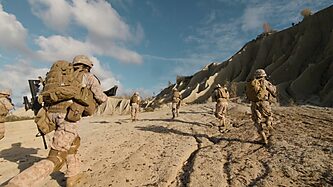 President Trump Understands What Congress Does Not: Syria Is Not America’s War