In 2002, libertarian lawyers Clark Neily and Steve Simpson — then both of the Institute for Justice — devised a plan to challenge Washington, D.C.’s ban on handguns. At the time, D.C.’s ban was the most restrictive in the nation; law‐​abiding residents could not even possess a functional firearm within their own homes. Neily and Simpson believed that these unreasonable restrictions were ripe for a constitutional challenge — a challenge that could perhaps make it all the way to the Supreme Court. Five years later, in District of Columbia v. Heller, the Supreme Court affirmed for the first time in history that the Second Amendment protects an individual’s right to bear arms.

Neily and Simpson began by approaching Bob Levy — then a Cato senior fellow, now chairman — with their plan, and he agreed to fund the case. Other challenges to D.C.’s gun laws had already been filed, but mostly by criminals whose sentences had been extended for gun possession. Levy, Neily, and Cato’s own Gene Healy (after Simpson dropped out due to the press of other work) instead set out to find diverse, law‐​abiding plaintiffs who would help challenge the often inaccurate stereotypes about the types of people who want to own guns. They found six plaintiffs — all ordinary citizens who simply wanted the ability to defend themselves and their loved ones. 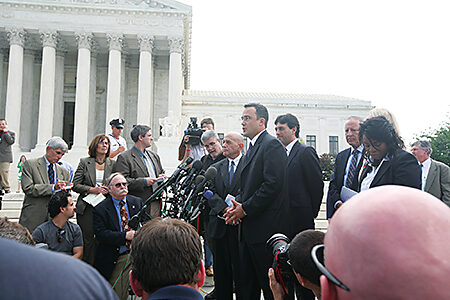 Clark Neily (second from right) addresses reporters outside the Supreme Court after oral arguments in District of Columbia v. Heller in 2008, along with Bob Levy and Alan Gura.

Shelly Parker, their initial lead plaintiff, is an African American woman who lived in a dangerous neighborhood near Capitol Hill. She had made it her personal mission to clean up the neighborhood, installing a security camera in her front window and alerting the police whenever she saw illegal activity on her streets. Those efforts made her an enemy of the local drug dealers, who threatened her and smashed her car windows. She wanted a gun to defend herself, but the District banned her from getting one.

Dick Heller, who would eventually become the lead plaintiff, was a private security guard who was authorized by D.C. law to carry a handgun while protecting government workers at the Thurgood Marshall Judiciary Building, but not in his own home.

Cato senior fellow Tom Palmer, another plaintiff, had previously been threatened in another city because of his sexual orientation, but he was able to ward off the attackers with a handgun his mother had given him. In the District, however, he wasn’t allowed to carry such protection.

The Heller case was a victory not just for these six plaintiffs, but for all Americans. And the efforts of lead counsel Alan Gura, along with Levy and Neily — now Cato’s vice president for criminal justice — have been hailed as a key example of how citizens can affect and animate the Constitution; their efforts have been cited in works such as Engines of Liberty: How Citizen Movements Succeed by David Cole, national legal director of the American Civil Liberties Union, and The Roberts Court: The Struggle for the Constitution by Marcia Coyle.

Ten years after Heller, unfortunately, many of the lower courts have adopted an unduly narrow interpretation of the decision. Tom Palmer even had to return to court when the District continued to prohibit carrying handguns in public until a federal judge overturned that ban in 2014. Nevertheless, there is unquestionably much more gun freedom in America today than there was 10 years ago. There are more states that do not any require licensing at all, more states with “shall issue” permit laws (versus the more restrictive “may issue” laws, which leave permitting decisions to the discretion of local officials), and more states where citizens are free to carry guns outside the home.

While the courts certainly are not as engaged in defending Heller as they should be, Neily believes that overall, “Policy and public opinion have been moving in a demonstrably favorable direction that has continued — or even accelerated — since Heller.” There are many more battles to fight both in the courts and the court of public opinion, but the simple fact that the Supreme Court now acknowledges that every American has the right to own a gun has had profound consequences across the nation. “Is it easier to get a gun after Heller? Do Americans have more freedom?” asks Neily. The answer to both, 10 years after Heller, is a resounding “Yes!”

The Supreme Court Is Too Gun‐​Shy on the Second Amendment