How should libertarians, as advocates of a more peaceful and restrained foreign policy, react to a tempestuous president who often professes to share those goals? In Fuel to the Fire, Cato foreign policy scholars John Glaser, Christopher Preble, and Trevor Thrall examine both the rhetoric and substance of the Trump foreign policy and find it lacking. Instead of stability and restraint, the Trump administration has often careened from one unpredictable move to the other, and usually failed to live up to the president’s sporadic anti‐​war sentiments.

For some critics of the president, his foreign policy is to be condemned as excessively noninterventionist or even isolationist. Fuel to the Fire aims to set the record straight by judging America’s foreign policy since January 2017 against the yardstick of restraint‐​minded realism. The conflation of the two is, in fact, overstated, in part because the president’s words often do not match his actions. 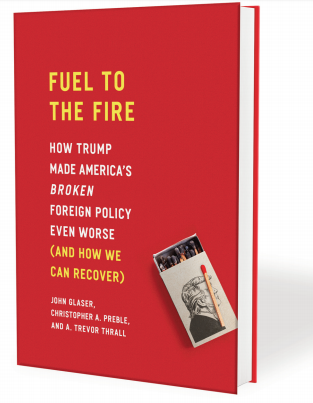 As an example, Trump came into office openly hostile to the ongoing war in Afghanistan, America’s longest‐​ever overseas war, which is now into its 19th year. Yet instead of drawing down American forces, the president instead adopted a surge policy of the sort that had been tried by George W. Bush in Iraq and Barack Obama in Afghanistan. Far from a radical departure, it was in line with the policies that have perpetuated the quagmire into a third presidential administration. It is time to genuinely get out of Afghanistan, and remove American forces from the Middle East more broadly.

One of the benefits of a less‐​interventionist foreign policy is that it can provide greater stability and predictability, as well as being less expensive in both blood and treasure. It would also allow the United States to distance itself from some of its most unsavory allies, such as the theocratic kleptocracy in Saudi Arabia, which has a long history of destabilizing the region and has inflicted a humanitarian catastrophe on its neighbors in Yemen.

“Restraint in U.S. foreign policy is ripe for a revival,” the authors of Fuel to the Fire make clear, but “what America needs is not Trump’s America First, nor a return to the status quo ante, but a radical revolution of its role in the world.”

Purchase print or ebook copies of Fuel to the Fire on Amazon and at booksellers nationwide.