In its dealings with the broader world, has the United States been a force for human liberty? Should it be? And if so, how? Christopher Preble, vice president for defense and foreign policy studies at the Cato Institute, set out to answer those questions in his new book for Lib​er​tar​i​an​ism​.org, Peace, War, and Liberty. As the author notes in the introduction, it is “a short book about a big topic.” 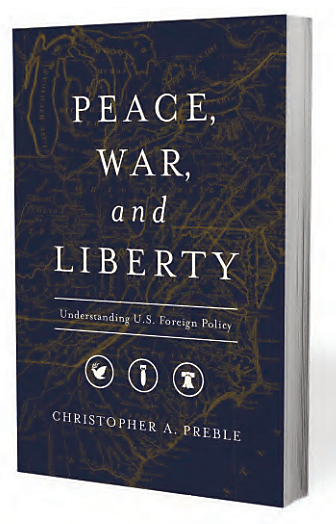 Preble draws upon the famous warnings of the Founding Fathers, who were wary of standing armies and firmly noninterventionist. In addition to opposing war because ofits obvious and direct cost in lives and fortunes, libertarians have long called on the deeper observation that, as writer RandolphBourne once put it, "war is the health of the state." In times of war, limits on state power recede and individual rights are subordinated to military goals.

Preble's guide to U.S. foreign policy traces the history of how this radical frontier republic became a globe-straddling empire, intervening at will and taking on the role of global policeman. Directly addressing those who claim U.S. primacy is a necessary bulwark of liberal values, he notes that this history is filled with more tragic errors than triumphant victories. Not only is American interventionism often ineffective, it can even backfire by causing foreign nations to equate democracy, capitalism, and individual rights with American military hegemony.

Cato often refers to its guiding principles as "individual liberty, limited government, free markets, and peace." In this accessible and evenhanded commentary, Preble makes clear how the first three of those all depend on the last. With Americans increasingly war-weary after so many years of seemingly endless brushfire wars and regime-change interventions since 9/11, the principles of peace and a more restrained foreign policy are more important than ever.