The opioid addiction crisis continues to be a hot‐​button political topic as presidential candidates hit the campaign trail in hard‐​hit states such as Iowa and NewHampshire. Even as Americans move away from the failed model of prohibition for the relatively innocuous marijuana, the response to far more lethal drugs like opioids still tends to focus on traditional approaches involving interdiction and incarceration. In addition to being harmful and counterproductive, this war‐​on‐​drugs mentality precludes many effective harm‐​reduction measures that could reduce both the lethality and the frequency of overdoses a swell as the violence associated with blackmarkets, gangs, and cartels.

Although government efforts have succeeded in reducing both the amount of legally manufactured prescription opioids and the number of opioid prescriptions, deaths from opioid-related overdoses are nevertheless accelerating. Research shows that the increase is due, in large part, to the substitution of illegal heroin and fentanyl for the now harder-to-get prescription opioids. Attempting to decrease overdose deaths by doubling down on this approach will not produce better results.

In contrast, harm reduction has a success record that prohibition cannot match. Unlike prohibition, harm-reduction strategies begin with the realistic and nonjudgmental premise that there has never been, and will never be, a drug-free society. Akin to the credo of the medical profession — "First, do no harm" — harm reduction avoids measures that exacerbate the harm that prohibition has already inflicted on non-medical users and focuses on reducing deaths and the spread of disease from drug use. 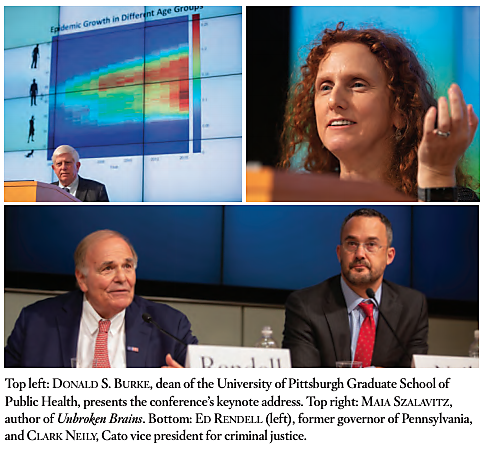 In March, the Cato Institute brought together clinical and research experts in epidemiology, public health, and addiction treatment to examine various harm-reduction policies and their track records.Among the presenters and panelists was former governor Ed Rendell (D-PA), who talked about his experience with safe-injection facilities and needle-exchange programs. These measures have proven to be greatly effective but are often opposed by the Drug Enforcement Agency, which sees them as flouting prohibition.

Other presenters included Jeffrey Miron, director of economic studies for the Cato Institute and director of undergraduate studies in the Department ofEconomics at Harvard University, andMaia Szalavitz, neuroscience journalist and the award-winning author of UnbrokenBrain: A Revolutionary New Way of Understanding Addiction. The two discussed Miron's research into the ways that prohibition increases death and disease.

Speakers from universities and safe-injection sites in Vancouver, Seattle, SanFrancisco, Los Angeles, and Pittsburgh discussed medication-assisted addiction treatment, expanded roles for the overdose inhibitor naloxone, medicinal cannabis, and the changing dynamics of the drug overdose epidemic from 1979 through 2016.

By highlighting these policies and their potential to reduce death, disease, crime, and corruption, the conference helped move forward the goal of its title: "Shifting from a War on Drugs to a War on Drug-Related Deaths."