The history of monetary policy and economics is inextricably tied up in the history of the Great Depression. The causes and cures of the economic cataclysm that began in 1929 have been the battlefield on which much of the debate between free‐​marketeers and central planners has been fought for nearly a century.

Through the Depression itself and for many years afterward, the Keynesian interpretation of its causes reigned supreme as the widely accepted conventional wisdom. In 1963, Milton Friedman and Anna Schwartz upended that consensus with their seminal Monetary History of the United States, laying the blame firmly at the feet of the Federal Reserve. In this interpretation, the "Great Contraction" — in which a third of the country's money supply was destroyed over a short timespan — converted a garden-variety recession into theGreat Depression.

Gold, the Real Bills Doctrine, and the Fed adds crucial new insight into how and why the Fed enabled this disaster, from two leading monetary historians: Thomas Humphrey, a 34-year research economist at the Federal Reserve Bank of Richmond, together with Richard Timberlake, emeritus professor of economics at the University of Georgia and an adjunct scholar at the Cato Institute. 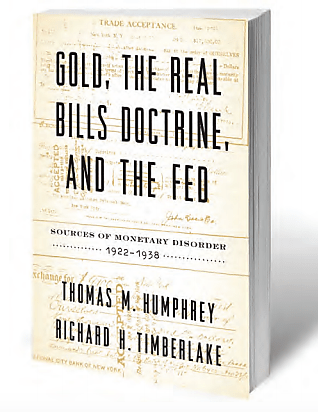 Their keen insight provides an explanation not only of what theFed did wrong but also of the flawed theory that drove policymakers to make such a monumental mistake. The so-called real bills doctrine was a widespread theory in the late 19th and early 20th centuries that held that money should only be created through "real bills" that represent transactions of real goods and services in the economy. This theory was one of the cornerstones of the Federal Reserve Act of 1913. Erroneous, though largely innocuous under normal circumstances, this doctrine was the theoretical basis for the Fed's refusal to counteract the collapse of the money supply at the onset of the Depression.

Sen. Phil Gramm, economist and former chair of the Senate Banking Committee, offered glowing praise for this book, writing, "In my opinion, this book is the most important book written on the Great Depression since Friedman and Schwartz." Friedman himself praised an early manuscript prior to his death in 2006, saying that the authors' "emphasis of the Real Bills Doctrine complements in an important way [our] analysis of whyFed policy was so 'inept.' ... We did not emphasize, as in hindsight we should have, the widespread belief in the Real Bills Doctrine. "

Purchase print or ebook copies of Gold, The Real Bills Doctrine, and the Fed at cato.org/store.

The Fed Tightens the Monetary Noose