Congress has not authorized a Base Realignment and Closure (BRAC) process for 13 years, despite the fact that multiple secretaries of defense have asked for congressional authority to eliminate unnecessary military bases. The most recent Pentagon estimates conclude that the Department of Defense has 19 percent excess capacity, meaning that roughly one in every five facilities are either wholly unnecessary or certain activities could be consolidated into other facilities. This is not only wasteful of American tax dollars, but also it hinders the military’s ability to move its resources to where they are actually needed. As Secretary James Mattis recently stated, “Every unnecessary facility we maintain requires us to cut capabilities elsewhere. I must be able to eliminate excess infrastructure in order to shift resources to readiness and modernization.” 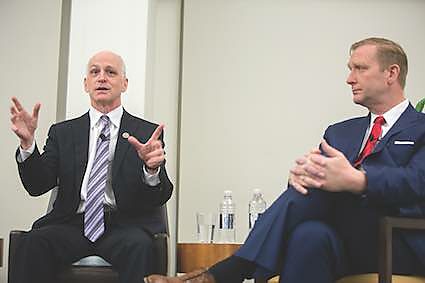 The Cato Institute is leading the way on efforts to bring BRAC to the forefront of foreign policy debates. Cato’s Christopher Preble has been studying the economics of base closures around the country for several years and has written extensively on the benefits of BRAC. Last year, Preble and the Cato foreign policy team began a concerted effort to increase awareness on the issue, starting with a policy breakfast with representatives from the major stakeholders: the House and Senate Armed Services Committees, the U.S. military, the Association of Defense Communities, former BRAC officials, and think tank scholars.

This meeting led to a coalition letter spearheaded by Preble and signed by over 45 experts from over 30 organizations from across the political spectrum, including former Secretary of Defense Leon Panetta, which urged Congress to authorize a new BRAC round. The letter, released publicly in June of last year, explained that, while closing a military base may be temporarily painful for surrounding communities, these communities often adapt and recover, and the majority ultimately benefit from the opportunity to diversify their economies away from their heavy reliance on the federal government. Thanks to Congress’s repeated efforts to block closures, the letter warns, “the military has been forced to allocate resources away from the training and equipping of our soldiers, and toward maintaining unneeded and unwanted infrastructure. … Meanwhile, many tens of billions of taxpayers’ dollars have been wasted.”

In March, Rep. Adam Smith (D‑WA), the ranking Democrat on the House Armed Services Committee and frequent proponent of BRAC, came to Cato for an event with Preble to discuss the future of BRAC. He warned that as things stand, the military is “hamstrung” in its ability to move assets, making it very difficult to function wisely or efficiently. Preble and Smith also coauthored an article on the topic in the journal Strategic Studies Quarterly. Their article provides an extensive overview of the issue, and features two case studies from Preble’s research.