Popular movies and television shows might seem an odd place to go searching for libertarian insights, but themes of freedom and individualism are more widespread than you might think. That’s the premise behind Pop & Locke, the new podcast from Lib​er​tar​i​an​ism​.org. Hosted by senior producer Landry Ayres and Natalie Dowzicky, manager of Lib​er​tar​i​an​ism​.org, Pop & Locke features Cato scholars and other notable libertarians for an in‐​depth exploration of pop culture hits from a libertarian perspective. 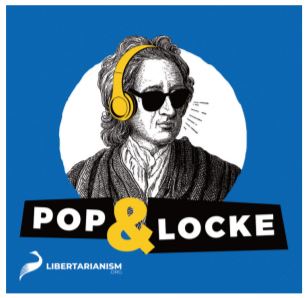 Each episode focuses on a single movie, TV show, or franchise, with Dowzicky and Ayres discussing such topics as the dystopian themes of Black Mirror, the politics of HBO’s Watchmen revival, or the dysfunctional government subtexts of Parks and Recreation. Guests have included Haley Victory Smith, editorial writer for USA Today, who helped the hosts explore the pros and cons of Disney princesses, and Reason’s Elizabeth Nolan Brown and Peter Suderman.

“Popular culture heavily influences our lives, and we want to delve into why that is,” explains Dowzicky. “By talking about popular culture and media, we are also able to have engaging and meaningful discussions with those with whom we may disagree.”

Pop culture can be a fun distraction, but the policy implications can be serious when entertainment shapes people’s opinions on important issues. Sometimes, as with Parks and Recreation’s Ron Swanson or the bizarre story of Joe Exotic’s political campaigns in Netflix’s smash hit Tiger King, libertarians make a central appearance and are identified as such. In other cases, deeper philosophical questions are explored—such as the nature of free will in HBO’s Westworld or the struggle for women’s emancipation in Little Women. Themes of individualism and triumph over authoritarianism are common, but do those necessarily translate into more concretely libertarian political insights? And what about portrayals of big, bad companies and capitalists as the villain?

Pop & Locke adds a new angle to Libertarianism.org’s mission of exploring the history, theory, and impact of libertarian ideas and the libertarian movement.

New episodes of Pop & Locke can be found on Lib​er​tar​i​an​ism​.org as well as through free subscription on iTunes, Google, Spotify, and other podcast distributors.