From Nicaragua to Kosovo and everywhere in between, the United States has a long habit of supporting ostensible democratic resistance movements. The admirable impulse behind it is understandable. Who doesn’t want to support the little guy against an oppressor in a fight for freedom and democracy against tyranny and authoritarianism? Ted Galen Carpenter, senior fellow for defense and foreign policy studies at the Cato Institute, makes clear in his latest book, Gullible Superpower: U.S. Support for Bogus Foreign Democratic Movements, that armed factions abroad are all too aware of this narrative’s appeal. Far too often, groups that are not even remotely democratic or liberal in their values come to Washington and use their empty rhetoric to play American politicians like a fiddle. 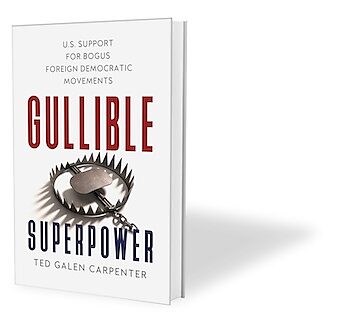 Ronald Reagan notoriously labeled Nicaragua's Contras as "the moral equal of our Founding Fathers and the brave men and women of the French Resistance." In reality, the Contras committed many atrocities. The Sandinista regime was eventually replaced, not by U.S.-armed Contras, but by free and fair elections in which both sides of the low-grade civil war were rejected. The most lasting consequence was not a free Nicaragua, but a law-breaking scandal that consumed the latter years of the Reagan administration.

It was not a lesson America's foreign policy elites took to heart. In the late 1990s, the same simplistic thinking led the United States to militarily intervene on behalf of the Kosovo Liberation Army, a group that had until recently and for good reasons been considered a terrorist group. Not only did the American-led NATO intervention lead to a frozen conflict and an economically dysfunctional, partially recognized independent Kosovo, it also set a precedent that Vladimir Putin's Russia eagerly seized on to justify military interventions in Georgia and Ukraine.

Through the lens of these examples and others, including Angola, Iraq, Libya, Syria, Afghanistan, and the "Color Revolutions" of the mid-2000s, Carpenter explains how "foreign insurgent groups have a distressing record of manipulating U.S. political figures, policymakers, and opinion leaders into supporting their causes." The cost of this gullibility has been measured in needless wars, failed states, and destabilizing chaos. As Gullible Superpower makes clear, it is time for America to heed the advice of John Quincy Adams and "[go] not abroad in search of monsters to destroy."

PURCHASE PRINT OR EBOOK COPIES OF GULLIBLE SUPERPOWER AT CATO.ORG/STORE