In December, Congress passed the largest tax overhaul in decades. While the legislation has its flaws, at its center were several key reforms that Cato Institute analysts have advocated for many years, particularly cuts to corporate taxes to keep America globally competitive.

Chris Edwards and Veronique de Rugy’s 2002 Policy Analysis “International Tax Competition: A 21st‐​Century Restraint on Government” was an early warning to Congress to cut the corporate tax rate in order to respond to global tax competition. “As international capital and labor mobility rises, the risks associated with not having an efficient federal tax structure increase,” they wrote. “This country should respond to rising tax competition by moving toward a low‐​rate consumption‐​based system.” While these arguments have since become commonplace ideas in the world of tax reform, they were not at the time. 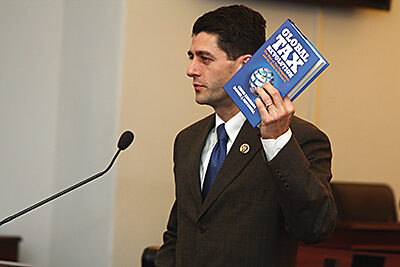 In 2008, Paul Ryan, then ranking member of the House Budget Committee, praised Chris Edwards and Dan Mitchell’s Cato book Global Tax Revolution, declaring that “if you haven’t read this book, you should.”

Edwards and Dan Mitchell’s groundbreaking 2008 book Global Tax Revolution was also influential in advocating corporate tax cuts. It laid out a comprehensive strategy for tax changes that would fuel American competitiveness, growth, and success in the world’s marketplace. At the time of its publication, Paul Ryan, then ranking member of the House Budget Committee, declared that “if you haven’t read this book, you should. America is behind the curve when it comes to the way we tax our businesses and companies, and we’re losing jobs because of it.” Ryan has now been widely credited for finally pushing these corporate tax reforms into reality. Steve Forbes called Cato’s book a “Superb, well‐​written, eye‐​opening survey of the exciting worldwide movement to cut individual and business taxes,” and declared that “This masterpiece may not wake up myopic Washington, but it will arouse the American people to demand action!” Ten years later, it seems, his prediction has come true.

Edwards worked with members of Congress throughout the negotiations on the tax bill, and Cato’s in‐​depth Policy Forums on tax reform were shown repeatedly on C‑SPAN during the build‐​up to the vote. Edwards and fellow Cato scholar Ryan Bourne’s idea for Universal Savings Accounts was also included in an earlier version of the House GOP tax bill and was discussed by congressional leaders in negotiations for the final legislation, although unfortunately it was left out of the final bill. In a Cato study, Bourne and Edwards described how similar accounts in Canada and the United Kingdom have become immensely popular and have benefited people of all ages.

Nevertheless, despite some disappointments in the final legislation, the triumph of corporate tax reform after 10 years of advocacy and scholarship underscores the impact of Cato’s ongoing work to educate policymakers and the public on tax reform and economic growth.