The First Amendment’s guarantee of freedom of speech is one of the most fundamental American rights — but in recent years, Americans seem to have lost sight of what it means. Liberals call for bans on microaggressions and other terms they deem offensive; conservatives call for jailing flag‐​burners and back the president in his calls to strengthen libel laws. Both sides of the aisle have embraced a “right” not to be offended over the right to free expression. 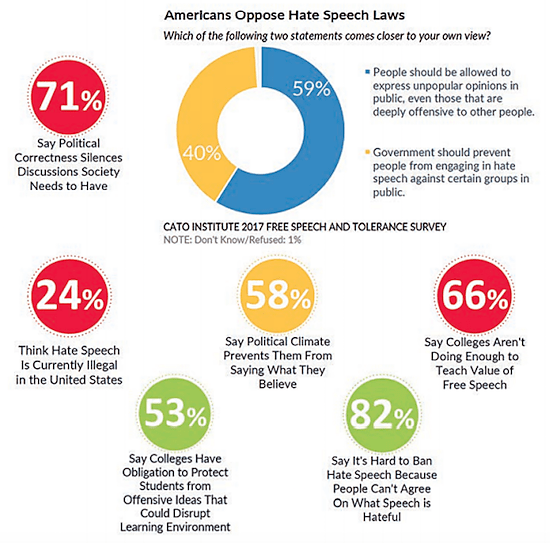 In light of this, Cato’s First Amendment Project is more important than ever. Cato scholars continue to defend freedom of expression for everyone, no matter how distasteful their opinion or politics. Cato’s 2017 Free Speech and Tolerance Survey conducted by Emily Ekins has been at the forefront of the public debate over free speech and has been cited repeatedly in the New York Times, Washington Post, and the Atlantic, by Andrew Sullivan in his New York column, and by numerous other leading newspapers over the past several months. Walt Hickey of the FiveThirtyEight blog deemed the report “staggering.” Among its findings: 63 percent of Republicans say that journalists today are an “enemy of the American people”; 52 percent of Democrats support banning “hate speech”; and 58 percent of Americans support a law banning flag burning. Yet at the same time, 67 percent of Americans still believe that freedom of speech means that the truth will eventually win out.

Cato senior fellow Flemming Rose has faced death threats over his stance on free speech — his decision to publish cartoons of the prophet Muhammad while he was the editor of a Danish newspaper made headlines and sparked protests around the globe. In December, the Danish government announced that it had invited Rose to be one of 10 members of a Free Speech Commission. The commission will provide an assessment of the legal foundation, history, and general status of free speech in Denmark and provide information for a national debate over free speech and its limitations. Earlier in the year, Rose hosted a program on Danish television network DR TV on which he interviewed thinkers from around the world on free speech and other political issues.